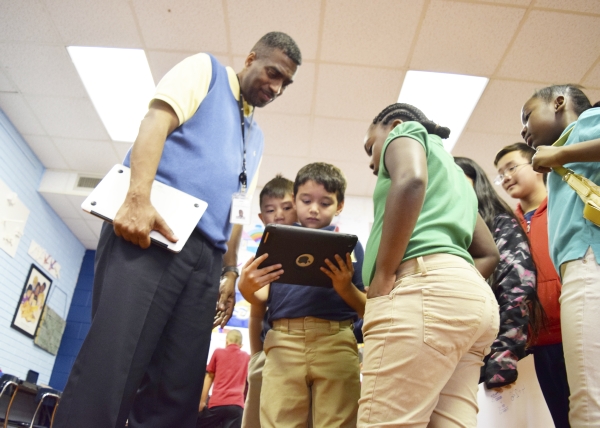 Anthony Johnson, left, and students watch a video made by Isenberg Elementary first graders. On Wednesday, Kristen Smith's first grade class learned how to animate from Johnson's fourth and fifth grade students, who have been learning the art thanks to an arrangement with TED-Ed. Rebecca Rider/Salisbury Post

While students in Anthony Johnson’s fourth- and fifth-grade classes have always had opportunities to make videos and post them online, this time the class is doing something different.

In December, Johnson was able to attend a weekend learning and training experience with TED-Ed in New York City. He was one of 30 teachers from 11 countries awarded the opportunity. There, he had the opportunity to pitch an idea: share what his students were doing on a global scale.

“It had to be innovative,” Johnson said of the pitch.

Now they get to showcase that work on an international platform.

TED approved Johnson’s idea, and helped fund the Johnsonville Learning Network, a weekly broadcast where students show what they’ve been learning in class that week. The students use innovative ideas and animation to put together their video.

Johnson said that the goal is “to inspire other teachers.”

The first episode is “a day in the life of a Johnsonville student,” and was created by a student wearing a GoPro camera for an entire day.

While at the TED-Ed weekend, Johnson received training on the nonprofit’s animation techniques. He said he expected it to be high-tech, but was surprised when TED staff pulled out an iPad and explained that they use a free app. Johnson said he left the room momentarily to send his class a message to download the app.

“So when I got back on Tuesday, we animated,” he said.

Johnson said his original pitch wasn’t to showcase Johnsonville. As he went through the interviews to qualify for TED-Ed weekend, though, the concept was receiving a lot of notice from staff and other educators.

During video sessions, students interview each other or guests, act as news anchors, record and edit video.

Isabella Figueroa, who was an anchor for the first video, said that the experience was nerve-wracking but good.

Thanks to Johnson, Isenberg Elementary has also been approved for a TED-Ed club, where students will design their own TED Talks. At the end of the year, they could be selected to deliver their talk on TED’s big stage in New York.

“I can’t put a price tag on that weekend,” Johnson said of his New York experience.

And he hopes that his students will have the same opportunity.

“I have a great group,” he said, “I really think they’re going to flourish.”