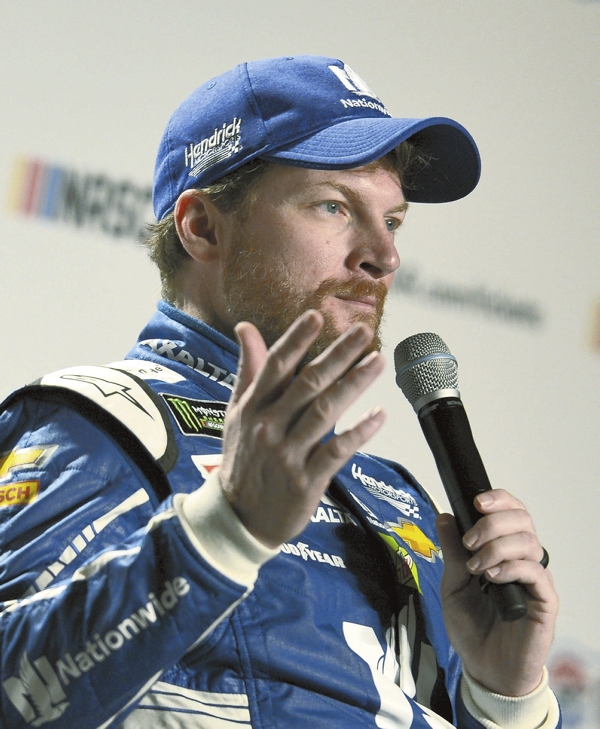 Earnhardt Jr. thrilled to be cleared for NASCAR return

CHARLOTTE (AP) — There is nothing more tedious to a NASCAR driver than preseason promotional work, which can often be full-day photo shoots and interview sessions. It can be the most dreaded part of the job.

Consider Dale Earnhardt Jr. the rare exception. His turn Wednesday at the Charlotte Convention Center was like the first day of summer vacation for NASCAR’s most popular driver.

He was thrilled to be back at work after missing the second half of last season with a concussion.

“I’m excited to be here for media day, which is new for me this year,” he said. “I’m excited for the season. It can’t get here fast enough.”

Earnhardt was cleared to get back in a race car in December, shortly before he married his longtime girlfriend, Amy Reimann, on New Year’s Eve and then embarked on a lengthy Hawaiian honeymoon. All this has him in a fantastic mood, eager not only to test drive next week at Phoenix but get to Florida next month for the season-opening Daytona 500.

All the time out of the race car gave Earnhardt time to reflect, and he recognizes how much life has changed.

“Getting married has been incredible. I wish I had figured all this out sooner,” Earnhardt said. “I’m frustrated with myself that I took so long to grow up because I’ve got an amazing wife and she has changed my life. She has really helped me as a person become better on all fronts.

“Personally, in all my friendships and relationships, how I interact with people and meet people and obviously in my professional life she has helped me as a driver.”

Earnhardt has suffered numerous concussions in his career, and his Hall of Fame father, the late Dale Earnhardt, was killed in a crash on the last lap of the 2001 Daytona 500. As he was sidelined for 18 races last year, many wondered if he would ever get back in a race car.

But Earnhardt worked through an intense recovery process in which he challenged his brain — and his desire to race.

Retirement, he insists, is a decision he wants to make on his own and not because a doctor tells him he can’t medically compete any longer.

“I don’t know when I’m going to stop driving,” he said. “I want to be able to make that choice and not have it made for me.”

Earnhardt learned quickly how the sport can just go on without someone, even the 14-time most popular driver. He has grown up in NASCAR, and being relegated to spectator was difficult. He initially stayed at home and tweeted a bit during the races. Then he began showing up at the track and watching events from his Hendrick Motorsports pit box.

By the end of the year, he was in the broadcast booth as a guest analyst.

All the different roles made him appreciate his job much more.

“As a society we get better and better at complaining and drivers aren’t any different,” Earnhardt said. “We moan and complain about everything, but when you get the chance to step back and watch it — it was a really eye-opening experience to see, almost an out-of-body experience. I got to see the drivers from a different point and got to see the whole sport from a different point of view.

“All that stuff really showed me how much I have going for me and how fun this really is. Driving the cars is fun. Doing the photo shoots, making the commercials, talking to the media, all those things are fun. You can make it not be fun if you want to and sometimes we’ve got a tendency to do that.”