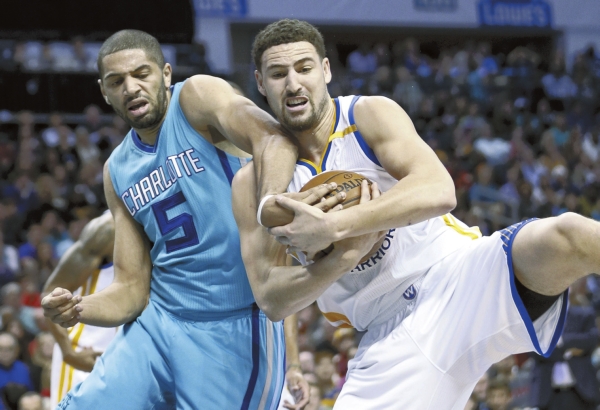 Golden State Warriors’ Stephen Curry, smiles as he watches the action from the bench in the first half of an NBA basketball game against the Charlotte Hornets in Charlotte, N.C., Wednesday, Jan. 25, 2017. (AP Photo/Chuck Burton)

CHARLOTTE (AP) — Beating the stacked Golden State Warriors is tough enough. Beating them when they’re coming off a loss is becoming darn near impossible.

Kevin Durant scored 16 of his 33 points in the fourth quarter, Stephen Curry added 28 points on six 3-pointers in his annual homecoming game and the Warriors rallied to beat the Charlotte Hornets 113-103 on Wednesday night.

It stretched the Warriors’ streak of not losing back-to-back regular-season games to an NBA-record 132 games.

“It’s big because you never want to get that negative energy in your locker room if you can avoid it,” Curry said. “Every game is big, but there is just another level of intensity that you need to avoid a losing streak.”

Klay Thompson had 19 points for the Warriors, who avenged a 105-102 loss to the Miami Heat on Monday.

“We’re resilient, we’re persistent and … we just kept grinding it out,” Durant said.

Curry capped a memorable trip home in which he had his high school jersey retired and was honored at Davidson College with the naming of “Section 30” at Belk Arena where the Wildcats play their home games.

“Both schools that I played for and the Warriors got a win, so that’s a solid trip,” said Curry, who was 11 of 23 from the field, including 6-of-12 shooting from 3-point range.

After trailing by six at halftime, the Hornets grabbed the lead with a 19-4 run to start the second half and led 80-75 entering the fourth quarter. It was only the eighth time this season the Warriors trailed after three quarters.

But they stormed back in the fourth behind Durant, who drove the ball hard to the basket and got to the line.

He finished 10 of 10 at the line and his two free throws with 5:25 left gave his team the lead for good.

“I think KD going to the line the way he did, not settling for jumpers but attacking was big,” coach Steve Kerr said. “Anytime the game is slipping away from you, it’s important to get to the free throw line. It stops the momentum of the other team, it allows you to set up your defense and you get some easy points.”

Warriors: Curry’s college coach Bob McKillop sat courtside to watch the game. … Golden State twice fouled Marco Belinelli on 3-point attempts resulting in seven points in the fourth quarter, including the technical foul on Thompson for arguing one of the calls.

Hornets: Roy Hibbert started in place of Cody Zeller, who missed the game with a quadriceps contusion. … Spencer Hawes had a big first half for the Hornets with seven points, 10 rebounds and three assists off the bench.

Hornets coach Steve Clifford refused to quantify the game as a moral victory for his team.

“I love this city, but that is one of the problems,” Clifford said. “It’s not OK (to lose this game). We have to get the past that point. We’re good now. We’re not the Hornets of five years ago, OK? I love our fans and everybody is saying, ‘Great effort,’ but that’s not OK. We did a lot of good, but it’s not OK.”

Curry said this was the first time he has played in Charlotte and not had butterflies before the game. Not that it really mattered, though. He came in averaging 36.3 points and 6.7 assists while shooting 53 percent from the field in his previous three games in Charlotte.

Curry’s return following his second MVP award drew a crowd of 19,639, the largest to see a game at the Spectrum Center.

Kemba Walker led Charlotte with 26 points despite being questionable before the game with an illness.

By Mike London mike.london@salisburypost.com SALISBURY — Salisbury’s Zadrian Harris got muscled around in the paint early and missed several point-blank chances, the sort of misses... read more