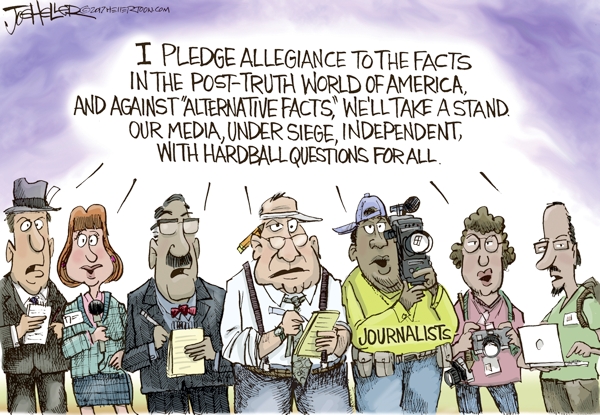 President Donald Trump’s executive activity has been frantic in the first days of his term. He has moved to keep a number of the scary promises that were easier to dismiss as unfeasible during the campaign than to accept as actual policies in the real world. But the big stories he has generated have had nothing to do with these actions.

According to data collected by BuzzSumo.com, the most widely shared CNN news story about Donald Trump since Jan. 21 was one about his press secretary, Sean Spicer, attacking the media for their reporting on inauguration attendance. It was shared 169,700 times on Facebook. A story on Trump’s executive order to start rolling back Obamacare clocked just 71,100 shares. On The New York Times’ website, the most widely shared story debunked Spicer’s “alternative facts.” It showed up on Facebook 170,900 times. The New York Times piece about Trump’s executive order abandoning the Trans-Pacific Partnership got 44,600 shares.

This is the result of a manipulation strategy described long ago by Noam Chomsky: “Keep the adult public attention diverted away from the real social issues, and captivated by matters of no real importance.” Leftists such as Chomsky argue that this is what capitalist elites do, but I know it as a common tactic of kleptocratic regimes such as Vladimir Putin’s in Russia.

There’s even a term for the tactic: “diversionary conflict.” Faced with economic difficulties or other problems potentially threatening to its survival, the regime starts a war somewhere or sharpens domestic ethnic divisions. Since the oil price plummeted in late 2014, the Putin regime has kept Russians on a steady diet of war news from eastern Ukraine and Syria (Russia and its allies have been winning). With the Syrian operation, Putin sharply raised his international standing, but a big reduction in protests against worsening economic conditions has probably been more important to him. …

Trump doesn’t need to start wars: He and his team know how emotional many Americans are about him. He can choose what he wants to be hated for — preferably for something silly and unrelated to his actual priorities at the moment. He used this to his advantage during the campaign: His alleged sexual misconduct took up so much more media time and public attention than issues like his business history, his tax returns and his proposals.

As the inauguration attendance argument played, Trump has been busy. Apart from starting the Obamacare rollback and withdrawing from the TPP, he has frozen a reduction of mortgage insurance premiums, allowed the Keystone Pipeline to go ahead and prepared to sign an executive order to begin construction of a border wall. Well aware that some of these important actions might cause indignation and targeted protest, Trump has tossed out another meaningless football for the media and the public to fixate on.

Just as it was unimportant how many people attended the inauguration, it doesn’t matter at all at this point whether undocumented immigrants actually voted last November and whether any votes were cast for dead people. No one is challenging the results of the election. The wall and the Keystone Pipeline matter, yet are much smaller stories in terms of readership. Trump and his team are already showing a flair for diversion. Is it enough to discourage the kinds of mass protests that such aggressive moves on lightning-rod issues might spark? We’ll know in the coming days and weeks.

Trump’s and his team’s communications look awkward, inept, gallingly primitive. It’s time to wise up: These people know what they’re doing. They want their political opponents to be confused, to flail at windmills, to expend emotions on meaningless scandals to distract them from any targeted, coordinated action against specific threats. There are going to be many of these: Trump appears intent on keeping his promises. Calm concentration is needed to counteract dangerous policies.

Bershidsky is a Bloomberg View columnist.

By James Hohman The Washington Post Donald Trump is quadrupling down on his lie that millions of ballots were illegally... read more