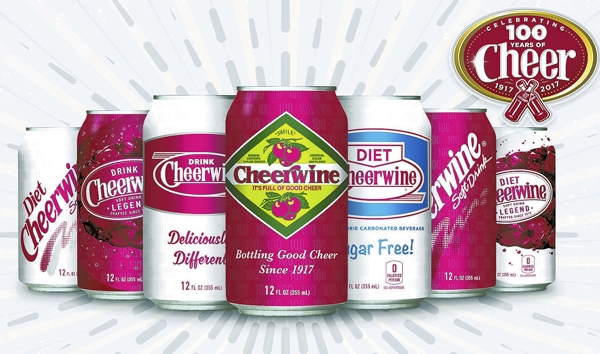 Submitted photo To celebrate its 100th birthday, Cheerwine is rolling out a collectible can series that replays the looks of its cans from years past. Also sprinkled in some 12-packs are $100 instant win cans.

SALISBURY — 1917 was an important year. Woodrow Wilson was sworn in for his second presidential term, the U.S. entered World War I, and Salisbury’s iconic soft drink, with a hint of wild cherry, was born.

For the past century, Cheerwine has been a soft drink favorite of generations of North Carolinians. To thank Carolinians for 100 years of memories, Cheerwine will roll out a series of commemorative cans, host a free birthday festival in Salisbury and exhibit its artifacts at the Rowan Museum.

“Staying true to our roots has been so important for us,” said Joy Ritchie Harper, head of marketing for Cheerwine and the great-great-granddaughter of Cheerwine’s founder, L.D. Peeler.

“Since 1917, we’ve remained an independent, family-owned and -operated business.  As much as we’ve loved growing our fan base and distribution across the U.S., Cheerwine will always call North Carolina home.”

This month, Cheerwine will roll out a limited-edition “Centennial Can Series.” The collection will include seven commemorative cans, with each design reflecting the brand’s look from different eras.

Each can will sport one of 50 “Moments of Cheer” from Cheerwine’s history. Several $100 prize cans will be randomly sprinkled in 12-packs across the soft drink’s distribution area.

On May 20, Cheerwine will host an outdoor birthday bash and festival in Salisbury to thank customers and fans for their support over the past century. The party will feature live bands, free Cheerwine, a barbecue cook-off and yet-to-be-announced surprises for people who attend.

While experimenting with soft-drink recipes in 1917 during World War I sugar rationings, Cheerwine founder L.D. Peeler added a wild cherry flavoring to the mix.  With that move, Cheerwine’s “legendary” taste was born, the company says.

In its earliest days, Cheerwine often was delivered to customers by horse, train and wagon.

During the remainder of the 20th century, Cheerwine became part of Carolina culture. The family business succeeded through difficult eras in American history, including the Great Depression and World War II.

At least three U.S. presidents have tasted Cheerwine: Dwight Eisenhower in 1953 during Rowan County’s Bicentennial, George H.W. Bush in 1992 at Faith Fourth of July activities and Barack Obama in 2011 at Mast General Store in Boone.

The 21st century has brought partnerships with other North Carolina-born icons, including Food Lion (Cheerwine ice cream in 2002), Krispy Kreme (Cheerwine’s Krispy Kreme doughnut in 2010 and the Cheerwine Kreme soft drink in 2016), and the folk rock band the Avett Brothers.

Together, Cheerwine and the Avett Brothers have raised more than $200,000 for several charities through a series of “Legendary Giveback” benefit concerts.

“While much has changed around Cheerwine over the last 100 years, the taste and authenticity of Cheerwine itself will never change,” said Cliff Ritchie, Cheerwine’s president.

Ritchie is the great-grandson of founder L.D. Peeler. Two of Ritchie’s children, Joy Harper and Carl Ritchie, represent the fifth generation currently working for the business.

In honor of Cheerwine’s centennial, the Rowan Museum is hosting a special exhibit throughout 2017. It will showcase Cheerwine memorabilia, artifacts and photos and will launch this Sunday from 1 to 4 p.m.

The museum is at 202 N. Main St., Salisbury. More information is available at the museum’s website at http://www.rowanmuseum.org.

For more information about Cheerwine and its history, visit www.Cheerwine.com, on Facebook at facebook.com/cheerwine or on Twitter and Instragram @drinkcheerwine.

Carolina Beverage Corp. produces Cheerwine, which is available in supermarkets, restaurants, mass merchandisers and convenience stores in select states nationwide and through the website.