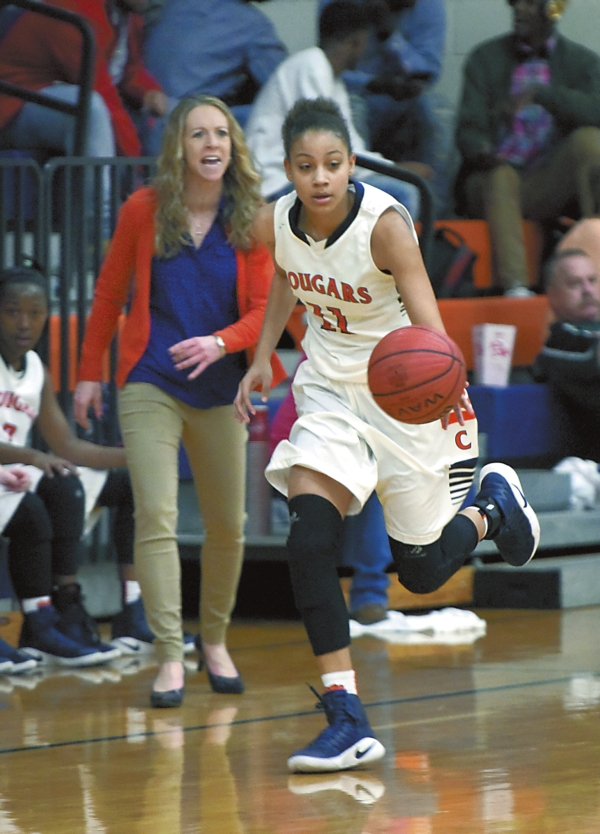 CHINA GROVE — There was a time when Carson girls coach Brooke Misenheimer was 0-9 against West Rowan, but the all-time series has been evened at 15-all by the Cougars.

Misenheimer has been the coach since Carson opened in 2006. Her teams haven’t played many games better than they did on Tuesday.

Gadson scored a career-high 28 points to lead a 74-47 romp by the Cougars, who wrecked the Falcons with a pressure defense that forced turnovers and led to quick, easy points. Often, Gadson was sprinting solo to the rim with no West players in sight, and point guard Olivia Gabriel, who scored 13 herself, kept looking up the floor for her.

“McKenzie is only 5-foot-8, but she’s very long and tough to throw the ball over in our 1-2-2 press or in our zone,” Misenheimer said. “She creates so many good things for us, and she had one of those special games.”

The teams had met twice already, with Carson pulling out a 62-58 SPC win in Mount Ulla and a 57-53 victory at Catawba in the Christmas tournament. But this one was much different.

West came into the game averaging 62 points, but had just 29 on the scoreboard after three quarters.

West’s offense features the inside scoring of Egypt Alexander and Abigail Wilson and the 3-point shooting of Mary Sobataka. Wilson had her normal game with 15 points, but Sobataka never got going and the Falcons (11-5, 6-4 SPC) couldn’t get the ball to Alexander in scoring position while it still mattered. Alexander got 10 of her 18 points in the final minutes after Carson had emptied the bench.

“We’d had two really tough games with them,” Misenheimer said. “So it was important to make a statement from the get-go. We put a lot of pressure on their guards, which is what we wanted to do. We were able to make them uncomfortable. We got steals and we got deflections.”

After five minutes, Carson (15-3, 10-2) led just 15-12, but a blistering 21-2 run that bridged the first and second quarters settled the outcome. A bucket by Gabriel started the run. A 3-pointer by Maci Cooper (10 points) gave the Cougars a double-digit lead. Gadson had 15 points by halftime. When Micah Furr made a bucket right before the break for the Cougars, the lead was 42-22.

“We embraced the challenge of not settling for that lead and we came out very trong again in the second half,” she said. “We were able to keep building.”

Gadson, who plays a post role for the Cougars will be a wing player in college. She was fantastic in the third quarter on both ends of the floor, and when Maren Shumaker, who had a whale of a game in the paint,  made a free throw midway through the third quarter. the Cougars led by 30 points.

“We didn’t expect to win like this, and no one could’ve expected it,” Gadson said. “But we played with energy and we played all four quarters. I’m very proud of my team.”

West gets  back in action tonight at South Rowan, a team the Falcons beat in overtime on Friday.

NASCAR’s new format: Drivers love it, fans will soon get a look

By Jenna Fryer AP Auto Racing Writer CHARLOTTE (AP) — At a crossroads with its core audience and eager to... read more