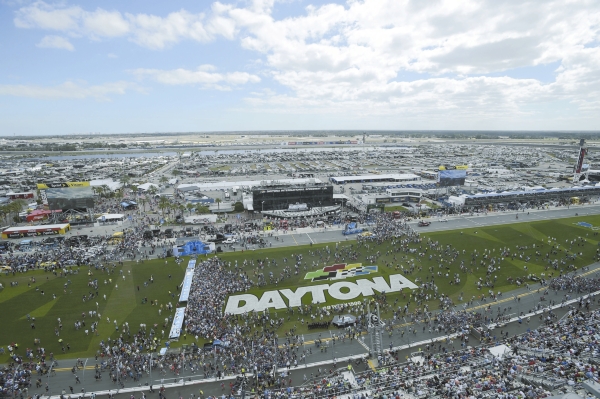 FILE - This Feb. 21, 2016 file photo shows fans gathering on the grass in front of the grandstands of Daytona International Speedway before the NASCAR Daytona 500 Sprint Cup series auto race in Daytona Beach, Fla. NASCAR is dramatically changing its format for the upcoming season, cutting every race into stages that reward points in hopes of making every lap matter. The overhaul announced Monday, Jan. 23, 2017 assigns three stages to every race. (AP Photo/Phelan M. Ebenhack)

NASCAR’s new format: Drivers love it, fans will soon get a look

CHARLOTTE (AP) — At a crossroads with its core audience and eager to attract younger fans, NASCAR took a huge swing at shaking up its model with a progressive new format.

The drivers seem thrilled with the changes.

Ultimately, though, the only thing that matters is whether fans embrace the new model.

Beginning with the season-opening Daytona 500, all races will be split into three stages designed to make every lap matter. Points will be awarded to the top 10 in the standings at the end of stages 1 and 2, and the third stage will decide the race winner. An overall victory is now worth five more points than second-place, and all the point collecting can be used as bonuses at the start of the playoffs.

With breaks between the stages — long enough for the segment winner to be interviewed, for television to air a block of commercials and for fans to grab a beer and a bathroom break — the system has been radicalized from NASCAR’s origins. The gritty, blue-collar days of the sport were built on drivers simply trying to make it to the finish line, often with parts and pieces hanging off their battered cars.

“You look at the way our races were formatted back in the ‘40s and ‘50s, it was formatted around endurance, long races, trying to make sure you were there until the end,” said Brad Keselowski, part of the panel that worked on the new format since last summer. “But today’s technology, the teams are just so smart, and if we created motorsports from scratch today, this is exactly how we would have done it.”

With so many different layers , the system seems complicated on paper and difficult to explain. But it boils down to essentially a pair of heat races, followed by the main event. The first two stages will be equal distance and comprise approximately the first half of the race in terms of distance, while the final stage will be about 50 percent of the race.

By awarding in-race points, NASCAR has forced teams to study strategy, take risks and not lay back at any point of an event.

It will put a heavy emphasis on pit crews and make mistakes very costly.

“There is more to lose from poor qualifying and poor pit stops,” said seven-time and reigning Cup champion Jimmie Johnson. “The trick is to go fast in qualifying and be consistently up front, you’ve got to lay it on the line. And then, pit stops — if you’re not in that 11-second bracket at worst, then you’re going in the wrong direction. It’s requiring everybody to execute on a much higher level, more consistently. It’s going to be tough.”

The new rules began to evolve after NASCAR met with NBC Sports officials last summer. As the meeting wound down, former driver Jeff Burton presented the NASCAR executives with an idea on how to improve the packaging of the product.

NASCAR was intrigued enough to study the idea, and through a collaboration with television partners, team executives, track presidents and the driver council, the current format was hammered out over nearly seven months of discussions. There were many tweaks along the way, with Denny Hamlin noting to NASCAR that the drivers had no real incentive to win the segments. That’s how the idea of awarding points during stages evolved, and industry-wide, the belief that chasing those points has led many to believe that racing throughout the pack will improve dramatically.

“When drivers get in a situation where they have to find a way to win a race, or they have to find a way to get by somebody on the last lap, those are moments that are fun to watch,” Burton said. “You want those moments where you can go prove to the world, ‘I can win this race. I can do what I need to do when it’s the most difficult.’  … Any time you can put these athletes in that position to excel, it’s more fun for us, the fans to watch.”

The drivers, through their formal council that keeps most of the top competitors in the loop, were aware of the discussions as they unfolded. There was little surprise to the drivers when the final product was unveiled, but Jamie McMurray was taken aback by the immediate fan reaction.

“When I read Twitter, I got angry as I read the negativity around it from the fans because I think it’s so hard to criticize something before you see it,” said McMurray. “We live in a world where I feel like people don’t like change, unless it’s for the president. So, I think change is hard.

“Personally, I like everything about it. To me, it’s what we needed.”