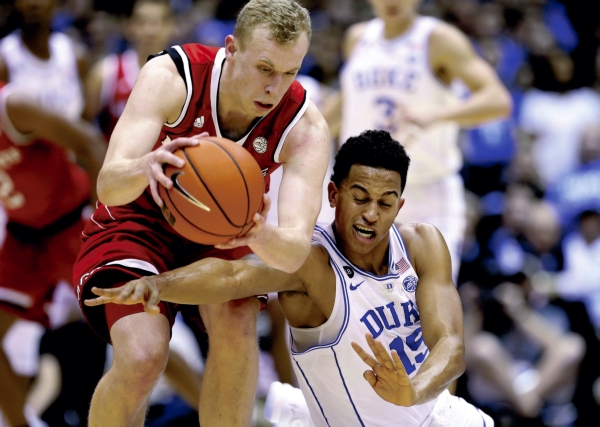 DURHAM (AP) — Freshman Dennis Smith Jr. scored a season-high 32 points to help North Carolina State rally from 12 down late in the first half and stun No. 17 Duke 84-82 on Monday night.

Abdul-Malik Abu added 19 points for the Wolfpack (14-7, 3-5 Atlantic Coast Conference), who earned the program’s first win at Duke’s famously hostile Cameron Indoor Stadium since 1995. N.C. State ran off a 20-5 run to erase a 68-59 deficit in the final 6½ minutes, then got one final stop when Jayson Tatum lost control of the ball before getting a shot off on Duke’s final possession.

N.C. State shot 55 percent after halftime, with Smith dominating the Blue Devils (15-5, 3-4) all night and finishing 10 for 18 from the floor with six assists.

N.C. State: Can anyone figure out the Wolfpack? There’s plenty of young talent, but this group lost by 51 points at rival North Carolina earlier this month to start a stretch of four losses in five games. Yet N.C. State responded with the kind of consistently determined effort it hadn’t shown much this season, hanging in even when Duke threatened to stretch out the lead and finding a way to push back with an impressive showing.

Duke: The Blue Devils just couldn’t corral Smith all night, and associate head coach Jeff Capel — leading the team in Mike Krzyzewski’s absence following back surgery — is still tinkering with lineups and rotations. He brought Kennard and Grayson Allen off the bench for this one, and Duke kept threatening to make this one look like so many games before at Cameron. And yet, when Smith and the Wolfpack made their move, the Blue Devils struggled for an answer in the deciding minutes.

N.C. State: N.C. State gets a few days off before visiting No. 13 Louisville on Sunday.