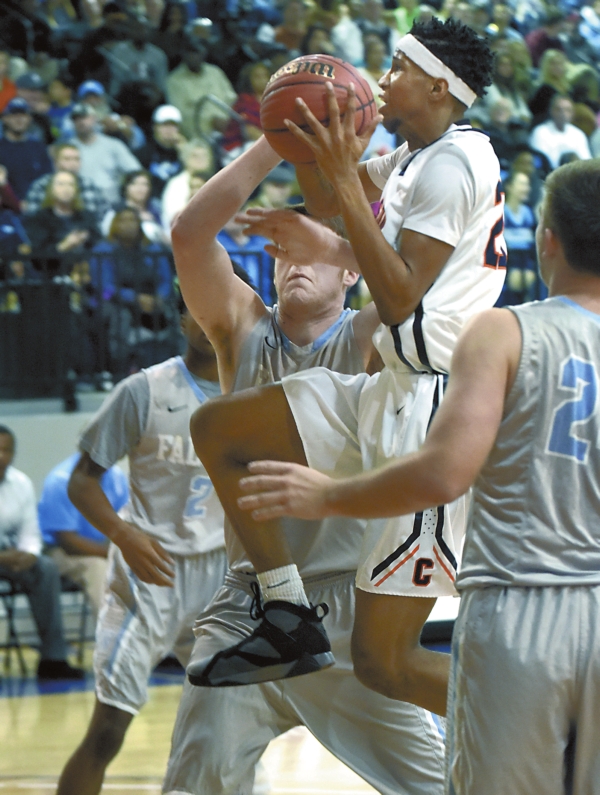 CHINA GROVE — West Rowan’s 6-foot-8, 250-pound Caleb Mauldin tormented Carson for 26 points and 25 rebounds on Tuesday, but he did it in a losing cause.

Carson, bouncing back from a 30-point loss to Robinson, won a remarkable South Piedmont Conference game, 82-78. Carson (11-6, 8-4 SPC) drilled 10 3-pointers and made twice as many free throws as West (12-4, 8-2 SPC), to off-set a dozen 2-point buckets by the relentless Mauldin, who combined sheer power with a velvet touch.

“It’s a heck of a win because West Rowan is really good, really hard to deal with inside,” winning coach Brian Perry said. “Owen White did everything he could possibly do against Mauldin. As overmatched as he was in height and weight, he battled him hard enough those last 25 minutes for us to win the ballgame.”

White started Carson’s big night with a 3-pointer and finished it with two clutch free throws. In between, the Cougars relied on tremendous  performances by Jamarius Hairston (30 points), Jailen Williams (16) and Brenden Westbrook (11). Cameron  Prugh chipped in with two 3-pointers, and Cole Perry made one.

Carson, especially Hairston, came out smoking. Hairston swished three 3-pointers in the first quarter as Carson shook off any  hangover from the  Robinson debacle. Carson led 18-13 after a quarter. Hairston had 16 points in the scorebook by halftime. The Cougars were up 40-33.

“We got beat badly by Robinson, but we were determined to fight back tonight and play as a unit,” White said. “Jamarius and Jailen were doing a great job of driving and kicking, and we’ve got shooters everywhere. That’s how it’s supposed to work for us.”

Still, West was the aggressor at the start of the third quarter, Kure, who had nine points in a flurry, couldn’t be contained, and his transition bucket with 4:50 left in the quarter put the Falcons on top, 46-45.

“I thought we showed a lot of toughness,” West coach Mike Gurley said. “When a team is shooting the ball like Carson was, it’s easy to get down, but we fought back. We didn’t quit. We got the lead.”

With West up three points, it was the moment of truth for the Cougars. Westbrook stepped forward. He was in foul trouble, but his soaring, acrobatic plays on both ends of the floor, stabilized the Cougars when it looked like they were tiring.

When Williams took Weeks to the basket for a  hanging and-one, Carson was surging again, and a driving bucket by Perry put Carson ahead 58-52 after three quarters.

When Weeks rose and drained a wing 3-pointer with 3:20 left, it was 72-all, and officially an instant classic.

Carson went up by four, but two straight Mauldin stick-backs made it 76-all with 1:20 left.

Williams connected on a squirming, off-balance shot in the lane for a two-point Carson lead,. Then,  with 50 seconds left, Westbrook slapped the ball out  of Kure’s hands when he had the ball in the lane and raced the length of the court for a strong finish and a four-point lead.

After Hairston missed two free throws, Hillie made a difficult floater, flying down the lane with 27 seconds left, to cut Carson’s lead to 80-78.

Then it got wild. West pressed and Tyrese Lawrence and Armon Hogue combined  to trap White and force a turnover. Then White fouled Hogue with 13 seconds left, and Hogue had a one-and-one free-throw opportunity to tie the game.

But Hogue missed  his first toss, and White scrambled after the long rebound. After he was fouled, White calmly made two free throws for a secure, four-point lead with 11 seconds left.

“When you make a mistake, you want to make up for it,” White said.

Martavio Rankin missed a desperate 3-point try for West in the final seconds.

“We didn’t make free throws and we made so many mistakes, but we still hung in there all night,” Gurley said. “Give Carson a lot of credit. Brian did a great job with his team. Hairston and Williams played wonderful games.”

Carson avenged two earlier losses to West, one in the Christmas tournament. West had a seven-game winning streak stopped.

“They didn’t shoot it as well tonight — at least from outside,” Coach Perry said.

By Mike London mike.london@salisburypost.com SALISBURY — It was hard to find words to describe a six-minute, second-half lull that could have proved disastrous for... read more