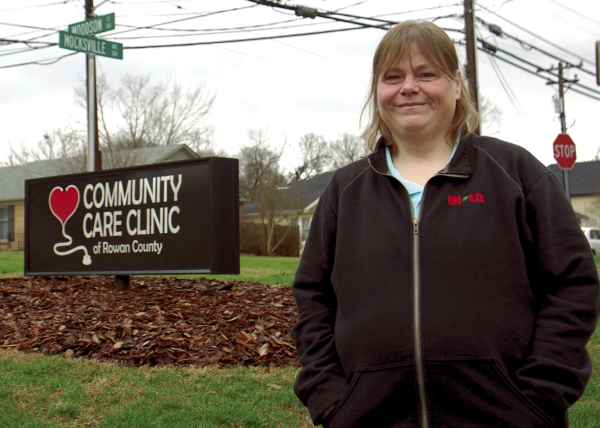 Photo by Mark Wineka/Salisbury Post Kelly McCarty was a patient at the 2015 Missions of Mercy Dental Clinic in Salisbury, when she had two hurting teeth pulled out. Her visit to the MOM Clinic that day led her to the Community Care Clinic of Rowan, where she now receives regular dental care. The 2017 MOM Clinic in Salisbury will be held Sept. 15-16 at the West End Plaza.

SALISBURY — Kelly McCarty’s teeth had been aching for so long she couldn’t remember when it all started.

McCarty regularly took aspirin for the pain and carried a tube of Orajel in her purse to rub on her gums. She resisted going to a dentist because she knew she couldn’t afford a visit, let alone the repairs that needed to be done.

Though she worked full time at a convenience store, McCarty didn’t have insurance.

Thanks to help from Anne Corriher at Main Street Mission in China Grove, McCarty learned about the free Missions of Mercy Dental Clinic scheduled in Salisbury in March 2015. She had two teeth extracted by a volunteer dentist from Charlotte. The relief was immediate, and the dentist was a nice, funny guy.

“I would go again, if I had to,” McCarty says today.

Planning is underway for a third Missions of Mercy Dental Clinic in Salisbury on Sept. 15-16. Heading the effort, which relies on hundreds of professional and community volunteers, are Dr. David Mayberry, a longtime Salisbury dentist, and Krista Woolly, executive director of Community Care Clinic of Rowan County.

Held each year in places throughout the state, the MOM clinics are an outreach of the N.C. Dental Society.

Salisbury had highly successful MOM dental clinics in September 2013 and March 2015. Some 800 people were treated over two days at both.

“It’s designed for people who basically have no other resource,” Mayberry says.

Besides the commitment in manpower, the MOM clinics require a substantial local fundraising effort. This year, the goal is $60,000.

The Salisbury venue in 2017 will be changing. The 2013 and 2015 dental clinics were held in Goodman Gymnasium at Catawba College. This year’s edition will operate out of the former JC Penney store at West End Plaza.

Some 60-plus dentists’ chairs and stations will be set up in the one-time store.

“Hopefully, the parking will be a better situation,” Mayberry says. “Catawba was great to us. We just thought we needed a place where we wouldn’t be in everybody’s way.”

Mayberry and Woolly are heading a committee of 10 people, all of whom have specific jobs such as raising money, lining up food, soliciting volunteers, involving churches and recruiting dental professionals across the spectrum.

“We have a good team,” Woolly says.

Dr. Brandon Aron is helping Mayberry with the recruiting of dentists. Debbie Hill, the dental coordinator, is lining up volunteer hygienists and dental assistants.

For the third Salisbury MOM Clinic in a row, members of the Old North State Dental Society will participate.

The professionals and community volunteers can work a morning, afternoon or whole days, depending on what they prefer.

Dr. Frank Eason is heading the local fundraising. Dianne Scott is coordinating community volunteers. The Rev. Rhodes Woolly and the Rev. Sean Barrett are serving as liaisons with churches.

Kaye Brown Hirst and Margaret Basinger are taking care of food needs. Mike Fuller of Innes Street Drug will provide a rudimentary pharmacy at the clinic to dispense prescribed pain medicine and antibiotics.

“Everybody pitches in,” Mayberry says.

People receiving treatment will receive numbered wrist bands, which will be handed out starting at 3 p.m. the Thursday before the Friday morning opening, so people don’t have to stand in line overnight.

Mayberry said he personally finds his work at the free clinics rewarding.

“You finish, and it’s an emotional thing,” Mayberry says of when the two days are over. “You look back and see what we’ve done as a community.”

Over recent years, Mayberry has volunteered at more than 10 MOM clinics in the region.

The dentists try to accomplish at least one significant thing for each patient — it could be fillings, extractions, cleanings or even partial plates.

At previous Salisbury clinics, some patients have been sent to Dr. Kathy Boyd for root canals at her office before returning to the clinic for fillings.

Eason, a dentist, has been a regular volunteer at the Salisbury MOM clinics, and he says most dentists who participate look forward to doing it again.

“It’s a feel-good thing, and just the right thing to do,” Eason says. “… Everybody knows there’s a need.”

Eason says if you remove the expense of going to a dentist, as the clinic does, it becomes helpful for a large segment of the population living paycheck to paycheck.

Mayberry says having the big clinic every two years has worked out well. More frequent clinics would run the risk of burning out the volunteers, and a two-year period also helps in replenishing the significant amount of local money that has to be raised, Mayberry says.

Several years ago, Dr. Jim Dunkin, who was then senior pastor at First Presbyterian Church, approached Mayberry after services one Sunday about the possibility of a MOM Clinic in Salisbury. Dunkin’s daughter was a student in dental school at the time and had told her father about the program.

“I made the mistake of saying, ‘Yeah, I know a little bit about that,'” Mayberry said.

Dunkin and Mayberry oversaw the clinics in 2013 and 2015, before Dunkin moved to Richmond, Va. He is definitely going to be invited back, Mayberry says.

“I’m proud we’ve been able to continue,” he adds.

As for Kelly McCarty, the 2015 MOM Clinic served as a gateway toward her learning about the Community Care Clinic, which provides free dental care for qualifying individuals.

She now depends on the Community Care Clinic for regular care and is in the process of having a upper plate done. Prior to her excruciating toothaches, she hadn’t been to a dentist in several years.

In 2015, McCarty thinks she was among the first 100 patients seen on the initial day of the clinic, and she thought her total time in the dentist’s chair was less than an hour. Overall, she says, it was a good experience.

“You can make friends while you’re waiting,” she says.