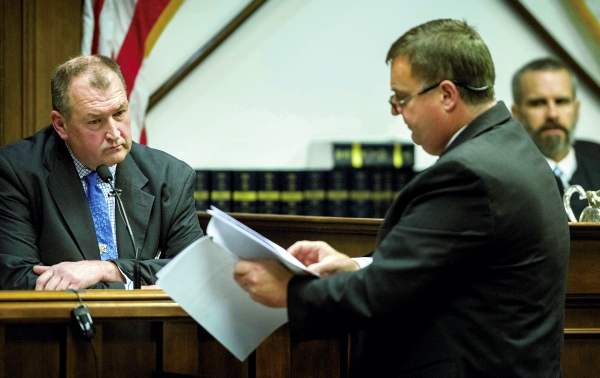 Jeff Steen in recorded statements to investigators: “I didn’t do it.”

SALISBURY — Jeff Steen, the man on trial for the 2013 murder of his grandfather and the attempted murder of his mother, told police detectives, “I didn’t do it” in video and audio statements heard Monday in court.

Detectives said J.D. Furr, 87, was beaten to death with a potato hoe, which was found lying beside his body in the backyard of his River Road farm in Richfield. Steen’s mother, Sandra, then 62, was found the morning of Nov. 6, 2013, barely conscious.

Sandra Steen was outside in 31-degree weather and hypothermic. And although she made attempts to crawl back to the house that night, she was in and out of consciousness and never made it more than 8 feet, others have testified.

Jeff Steen talked with Rowan County investigators numerous times, including at least three times Nov. 6, 2013, the day his mother and his grandfather’s body were found.

“All we are asking is for you to be honest with us,” Detective Jason Owens said to Jeff Steen.

“I have been honest with you. I haven’t kept anything out of it,” Steen said in one recording.

The night before, Steen told investigators he left three times to travel back to the Albemarle home he shared with his then-girlfriend, Adrienne Dixon, now Adrienne Eller. He want to get supplies to fix a ceiling fan he was installing at his grandfather’s house. He said one of those times he left to get a band saw and another time he needed bolts.

He installed the ceiling fan, and his grandfather inspected his work, Steen said in the video recording. He said he told his mother goodbye or either, “I’ll see you tomorrow,” and left. He later said in recorded statements he told her to lock her shed and he left.

At one point during the video interview, Jeff Steen could be heard saying, “I hope I’m giving you these times right cause I know this is crucial.”

Steen told detectives he changed into a T-shirt on one of those trips home because it had gotten cooler. Sandra Steen told investigators she’d scratched her assailant on the arm. Investigators said Jeff Steen was in fact wearing a T-shirt during the attack and had scratches on his arm.

However, when Jeff Steen first spoke with investigator Jason Owens, the detective asked to see any injuries Steen may have received. Steen, wearing a long-sleeve green sweatshirt, showed the detective both sides of his hands but never rolled up his shirt.

Once Owens was told Sandra Steen scratched her attacker on the forearm, the investigator went back to Jeff Steen and asked him to show him his arms. When Steen rolled up his sleeves, he revealed an arm covered in scratches.

In his video interview with investigators, Steen told them he saw his mother first, ran to her and she grabbed his arm. He asked his mother if she was hurt, Steen told detectives. He then looked up and saw his grandfather’s body.

“I couldn’t look him in the face,” Steen said on video recording.

A detective asked Steen why, and he said, “because his face was all bloody.”

Steen said in recordings that when he called 911, he at first was connected to the Stanly County telecommunications system and was repeatedly reconnected to Stanly County before finally speaking with a Rowan County 911 operator.

He told Rowan authorities he rubbed his mother’s hair to reassure her that she was going to be all right. Steen said his mother was shivering and he couldn’t find a blanket, so he laid on top of her.

Later, detectives asked Steen during an interview at the sheriff’s office if he laid on top of his mother, why didn’t he have blood on his sweatshirt. Steen suggested that perhaps the blood had already dried by then.

Steen maintained his mother scratched him the morning he found her, but medical experts and detectives said that wasn’t possible. Sandra Steen was too weak and her hands were clenched and remained in a locked position after being admitted to the hospital.

“Who’s lying, your mother or you about that?” Detective Owens asked.

“Facts are facts,” Owens could be heard saying on the recording.

“Facts are y’all are trying to pin this on me,” Steen said to detectives.

Steen asked detectives during a nearly three-hour interview at the Rowan County Sheriff’s Office if he was under arrest.

“I’m not going to say I done it. I didn’t do it,” Steen told investigator Carl Dangerfield.

Dangerfield asked Steen in an audio interview if he was heavily in debt, to which Steen said no.

Steen said no and that he would buy an occasional $10 lottery ticket. He admitted to owing back taxes but said payments were being garnished from his paycheck.

Steen told the investigator he was making about $50,000 a year.

Steen also said during a recording that he didn’t care if his name were left in his grandfather’s and mother’s wills. His main concern was that the farm stayed in the family, he said.

The trial resumes at 9:30 this morning.