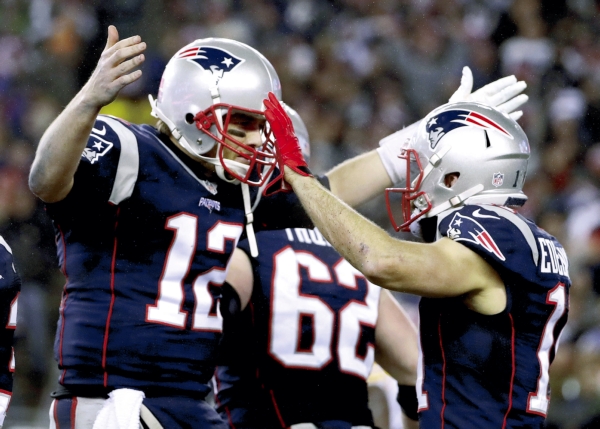 After beginning the 2016 season suspended for four games for his role in the “Deflategate” scandal, the New England quarterback relentlessly carried the Patriots to an unprecedented ninth appearance in the title game, and his seventh. Brady threw for a franchise playoff-best 384 yards and three touchdowns in a 36-17 rout of the helpless Pittsburgh Steelers on Sunday in New England’s seventh consecutive AFC championship game.

The Patriots are early 3-point favorites heading to face Atlanta in two weeks in Houston, seeking their fifth NFL title with Brady at quarterback and Bill Belichick as coach. Belichick’s seventh appearance in a Super Bowl will be a record for a head coach.

Brady was banned by NFL Commissioner Roger Goodell when New England (16-2) went 3-1 to open the schedule.

Since his return in Week 5, the only defeat came at home to Seattle, and Brady, 39, had one of the best seasons of a Hall of Fame-caliber career. He punctuated that in dreary weather similar to the 2014 conference title game that precipitated the deflated footballs investigation by flattening Pittsburgh’s secondary.

“This is my motivation right here, all these fellas in front of me, these guys,” Brady said, pointing to his teammates and ignoring mentions of “Deflategate.” ‘’The boys showed up to play today.”

The ending for Pittsburgh (13-6) was anything but perfect. It lost star running back Le’Veon Bell late in the first quarter to a groin injury. That didn’t seem to matter much in a record 16th conference title match for the Steelers, who made mistakes in every facet of the game.

The franchise that has won the most Super Bowls, six, and the most postseason games, 36, never seemed likely to challenge in the misty rain.

“We’ve got to be capable of overcoming those things,” Steelers coach Mike Tomlin said. “Injuries and so forth are part of the game. The reality is we didn’t make enough plays in any of the three phases. The game kind of unfolded in the way they would like it to as opposed to the way we would like it to. Not only in score, but in style of play and so forth. We didn’t get a lot accomplished tonight.”

Hogan’s second touchdown came on a flea-flicker and he easily beat safety Mike Mitchell to the corner of the end zone. At that point, Hogan had seven catches for 117 yards and the first multi-touchdown game of his four-year career.

His first score made it 10-0 and came after Brady could have taken a nap before throwing, a common occurrence against a nonexistent pass rush. Hogan was all alone in the back of the end zone for the 16-yard score.

Pittsburgh had drawn to 10-6 on DeAngelo Williams’ 5-yard run to cap an 84-yard drive. Veteran Williams is a nice security blanket in the backfield, though he’s no Bell these days.

Still, he contributed on a 70-yard drive toward the end of the second quarter that appeared to be capped by Jesse James’ TD reception. But video review showed James down at the 1, and the Steelers couldn’t get into the end zone, Chris Boswell connecting for a 23-yard field goal.

The Steelers never threatened to get back into it. LeGarrette Blount punctuated the romp with a bruising 18-yard run on which he carried nearly the entire Pittsburgh defense with him. He then scored from the 1.

By the end, the crowd was chanting “Where is Roger?” and celebrating yet another Super Bowl trip for the Patriots.

Soon after, tight end Martellus Bennett was boogeying with the cheerleaders, pompoms in hand, and owner Robert Kraft was accepting the Lamar Hunt Trophy.

“For a number of reasons, all of you in this stadium understand how big this win was,” Kraft said. “And we have to go to Houston and win one more.”

Stephen Gostkowski’s 31-yard field goal to open the scoring set a franchise record with 27, surpassing Adam Vinatieri’s 26. Gostkowski is fourth all-time. He made a 47-yarder in the third quarter, a 26-yarder in the fourth, but he missed an extra point.

Boswell, who set an NFL mark with six field goals in the Steelers’ 18-16 win at Kansas City last week, missed an extra point wide left and made a 23-yard kick.

Steelers: Bell’s early departure left him with 20 yards on six carries and no receptions.

Sunday walks
in the park

The previous time before Sunday that both conference championship games were decided by at least 19 points was the 1978 season. The Falcons beat the Packers 44-21 for the NFC title.

After winning the AFC East with the conference’s top record, New England defeated the Texans 34-16 and the Steelers to reach Super Bowl 51 in Houston on Feb. 5; New England won the 2002 and 2005 Super Bowls after beating Pittsburgh for the AFC championship.