In a sign of unity, Livingstone, Catawba students gather for morning prayer walk 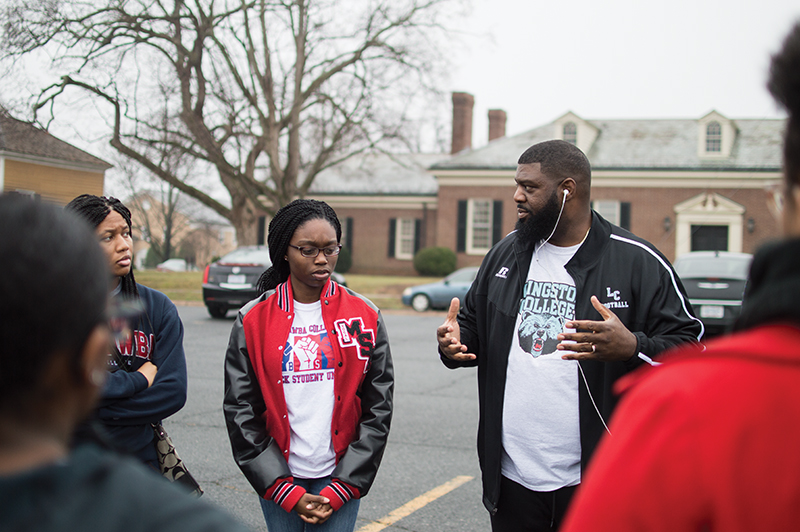 SALISBURY — About a dozen students from Livingstone College and Catawba College on Saturday held a prayer walk in downtown Salisbury.

Organized by students from the two schools, the walk was intended to show unity, pray for the community and spread the gospel, said Catawba College junior and event organizer Alexis Beverly. The students met in front of the Rowan Public Library headquarters and started the walk down Fisher Street. She said a similar event occurred last year.

“The whole purpose behind this is for us is to go out in the community and spread the gospel,” Beverly said. “It’s not, like, to pressure people to follow Jesus or become a Christian but just to spread the word of Christ, to bring peace to our community.”

The showing of Catawba and Livingstone students is also important, she said.

“Back in the day, there was that tension, and still currently there is that tension between our two campuses,” she said. “I think it’s important just to break that cultural barrier and bring our campuses together.”

When there was a large fight on Livingstone’s campus during the school’s homecoming, Catawba students said they were worried about going near Livingstone, Beverly said.

“That constant fear with Catawba students is just always going to be there,” she said. “There’s students now — it doesn’t matter whether it’s black, white, Asian, hispanic — they don’t want to go over to Livingstone, and it’s because of that fear. With Livingstone students, it’s that they feel like they won’t fit in.”

Beverly is president of a group on Catawba College’s campus called the “Black Student Union.” It’s not intended to be limited to certain ethnic groups, she said. Founded in late 2015, the group plans community events about issues students and members are concerned about. For example, Beverly said the group helped organize protests when Vice President Mike Pence campaigned at Catawba College.

“It’s not like we, the teachers, said ‘hey, as adults, let’s get these kids involved,’ ‘” Russell said. “It was students on both sides saying ‘we want to come together and do things together’ … I was excited about it and got up early and wanted to be a part of it.”

Before the group departed on its walk through the city, Russell asked that students keep Salisbury in its prayers because of recent violence. He said it’s likely that the colleges hold another joint prayer walk in the coming weeks.