From Rowan to D.C.: Two different stories for locals at inauguration 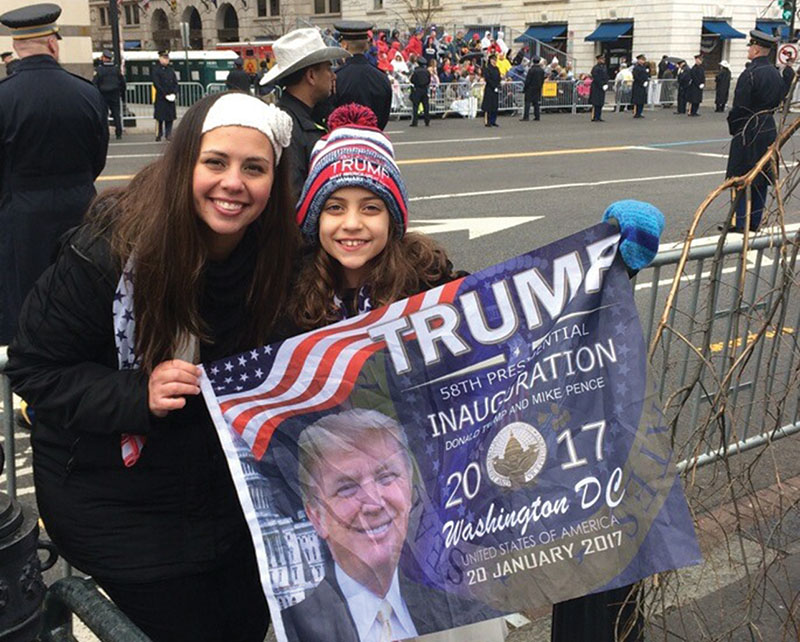 SALISBURY — Dozens of locals traveled to Washington, D.C. this weekend, but Amy and Hannah McIntyre had an inauguration experience unlike any other.

First, the mother-daughter pair from the Rockwell area traveled to Philadelphia days earlier for a doctor’s appointment before taking a three-hour ride to Washington, D.C. After a person tried to break into their hotel room the night before, Amy and Hannah arrived at the inauguration ceremony later than expected. Because they were late, the mother-daughter pair was relegated to an area for the general public. The day ended on a positive note, however, when they found a way to watch the inaugural parade from an area adjacent to the White House and a Trump family viewing stand.

After a full day of walking and history, Hannah — a student at Rockwell Elementary — was sound asleep on Saturday morning.

“Hannah really enjoyed it,” her mother Amy said in a phone interview. “She’s actually asleep now. You might be able to hear her snoring through the phone.”

The McIntyre’s inauguration journey began in Philadelphia, at Shriners Hospital for Children, where Hannah received a new brace for her severe scoliosis. Previously, Hannah’s braces haven’t fit properly and have worsened her condition. The new brace, however, is a perfect fit. At a later date, Hannah is scheduled to return to Philadelphia for spinal fusion surgery to help correct her scoliosis.

Initially, the McIntyres hadn’t planned to go the inauguration, but Hannah is a history buff who likes Donald Trump.

“She is my little dreamer,” Amy said. “At the age of nine, she wants to learn everything and I want to be able to give it to her and give her every opportunity that I can. I love that she likes to learn.”

After some prodding from her daughter, Amy said she emailed North Carolina’s newest congressman — Rep. Ted Budd, R-13 — to ask for tickets to the inauguration. They got the tickets and made plans to travel to Washington, D.C.

In an interview on Thursday, Hannah said she was excited to make the trip. Hannah said she brought six books with her and had told a number of people at her school that she was going to see Trump and Washington, D.C.

“He always likes to say, ‘make America great again’ and I like that,” she said.

She planned to wear a black and white dress and some rain boots to the inauguration.

The mother-daughter pair stayed in a hotel about 9 miles from Washington, D.C. After a person attempted to break into their room, the hotel drove Amy and Hannah into the city as a form of compensation for the incident. Their spot for the inauguration wasn’t great, but their inaugural parade seats couldn’t have been better. A Secret Service agent guided the mother-daughter pair to an area that required credentials to enter. It was, perhaps, only several dozen yards from a viewing stand placed in front of the White House.

When a person informed the McIntyres they needed credentials, the Secret Service agent “opened her vest and said ‘they’re with me’ in a stern voice,” Amy recalled. At one point, Amy said her daughter held up her flag and Trump looked over, waved and pointed. Trump’s daughter, Ivanka, blew a kiss to Hannah at another point during the parade.

“It was just the most amazing moment for her,” Amy said about her daughter. “She took us right up to where the press and stuff was. We were able to sit right up front.”

The flag Hannah held up at Trump and a knit cap were the result of an encounter with a vendor and an example of her outgoing personality.

“She stopped and looked at him and said, ‘well, let me ask you — why aren’t you handing out that stuff instead of selling it?'” Amy said.

After explaining himself to the young, elementary school student, the man gave a Trump flag and knit cap to Hannah for free. Amy said she tried to pay, but the vendor wouldn’t allow it.

For safety, the mother-daughter pair remained in the viewing stand area until crowds cleared out. They took a taxi from a nearby hotel back to their hotel, outside of the Washington, D.C. city limits. By the time Amy and Hannah reached their room, it was midnight.

While Amy and Hannah waited until crowds cleared, a Salisbury trio — Chris Norris, Brian Hancock and Luke Humble — were just waking up in a Fairfax, Va., hotel room. Their inauguration story was much different than Amy and Hannah.

At 5 a.m. on Friday, the trio — two college students and a student pastor — were standing in line to get a spot to watch inauguration. By 2 p.m., they were eating McDonalds. Shortly after that, they were asleep.

The three Salisbury natives had attended Trump rallies during the presidential campaign. They also made a pact to attend the inauguration if Trump won. When all three were together over Christmas break, they reminded one another of the pact and decided to try and get tickets, which they obtained through Rep. Richard Hudson’s office, R-8.

Humble, a student at Catawba College, had a lab on Thursday afternoon. It delayed the trio’s departure until 6 p.m. At 1 a.m. on Friday, they finally arrived at the hotel but only slept until 3 a.m., Norris said.

“We were trying to get the best seats available,” he said. “We were in line when the metro opened.”

Sure enough, the trio snagged top-notch seats, something all three said they were happy about. A negative: they were standing for several hours without a break. Inauguration festivities didn’t start until 11 a.m. or so. Another negative: they didn’t bring any food.

“It was bad. I mean it was really bad,” Norris said. “We had to walk around D.C. to find something to eat.”

By 2 p.m. they found a McDonalds. It was crowded. The weather was ice cold. After a meal of questionable nutritional value, it was time for a nap and they headed back to the hotel to get some sleep.

“We wanted to go to watch the parade, but we were dead,” Norris said.

The nap lasted longer than most. By the time all three were awake, inaugural balls were on TV.

Norris, Hancock and Humble said they didn’t see many protesters as a result of their decision to avoid the inauguration parade.

Hannah and Amy didn’t witness violent protesting first-hand. The violence was confined to a relatively small part of the city but resulted in vandalism and dozens of arrests. Amy said she and her daughter saw some peaceful protesters and a smashed-up car.

“It was just a complete culture shock because of the protesters, and it was just very different,” Amy said.

When the mother-daugther pair spotted a smashed-up car being towed later, it frightened Hannah, Amy said. Determined to learn and, perhaps, tell people about why she likes Trump, Amy said her daughter wanted to return to the city for the women’s march on Saturday. The elementary school student told her mother she wanted to ask why the marchers didn’t like Trump, but Amy protested the idea.

The mother-daughter pair planned to fly back to North Carolina on Saturday afternoon.

In a phone interview on Saturday, Humble said his favorite part of the trip was talking to some of the hundreds of thousands of people who made the journey to Washington, D.C. for the inauguration.

“It was a once-in-a-lifetime opportunity and I glad I was able to see a part of history go down in person,” he said.

Hancock said he enjoyed the trip because of the message in Trump’s inaugural address. North Carolina evangelist Franklin Graham also delivered a poignant message — that rain falling during Friday’s inauguration was a sign of a blessing — Hancock said.

The trio also talked about the women’s marches occurring on Saturday and other opposition to Trump’s presidency. Women’s rights were the intended focus of Saturday’s marches, which occurred in many cities across the country.

“I believe in grace and believe that a past should not give you merit to label somebody,” Hancock said. “He has come out and expressed regret.”

Hancock said he voted for Trump because of his pro-life stance. There are other reasons, too, Hancock said.

“I appreciate his edginess and straightforwardness and that he doesn’t try to put on a mask,” he said. “Trump is just himself.”

Humble said people shouldn’t “sweep under the rug” past actions and statements by Trump, but the newly sworn-in president cares about inner-city communities and the nation’s economy. Humble was previously a fan of neurosurgeon Ben Carson but switched to Trump later because of his pro-life stance.

Norris compared Trump to Clinton when asked about criticism of the president.

“When (Clinton) destroyed Syria, ISIS took over and ISIS is destroying women’s rights,” he said.

Norris said he voted for Trump because of an exhaustion with the Washington elite.

“He’s finally a Republican with a backbone,” Norris said.