Playing with the pros: NASCAR’s Kyle Petty a little nervous about performing with Salisbury Symphony 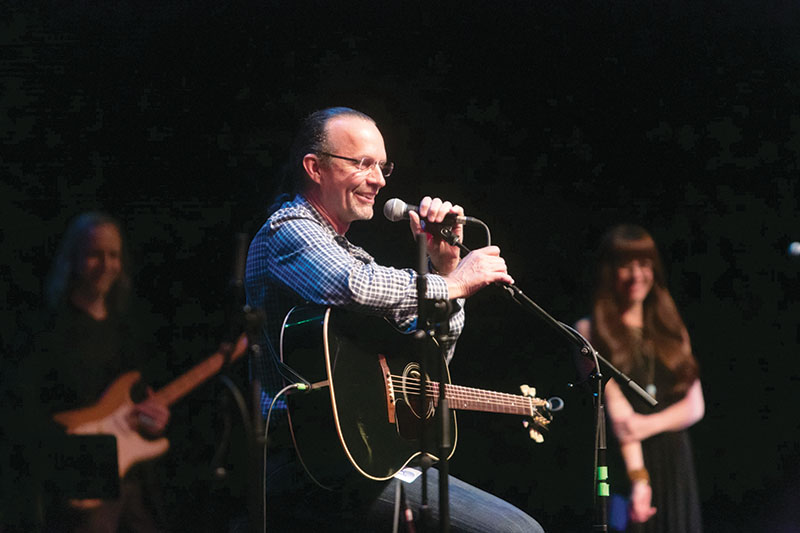 Kyle Petty is seen during a performance with the Salisbury Symphony Orchestra at Pops at the Post. (File photo)

SALISBURY — Kyle Petty figures he has written hundreds of songs over the years — and he hasn’t stopped.

Though he remains closely connected to NASCAR, the sport that made his family racing legends, Petty devotes time to music every day. He carries a notepad with him so he can write down a lyric idea he has thought of, or one he has heard in conversation.

When he’s at home watching television, he strums his guitar — a habit that can be annoying to his wife, Morgan. He often shows up at open-mic night at the Evening Muse in Charlotte.

“You learn to do it, and it’s a craft,” Petty says of writing songs, something he has been doing since a traveling preacher gave him a guitar when he was 12. “If you put it on the shelf, you’ve let time fly.”

Petty will perform three of his original compositions with the Salisbury Symphony Feb. 4 at Catawba College’s Keppel Auditorium. It’s part of the orchestra’s 4 p.m. Family Concert, which also will feature the 150-voice Rowan County Fifth Grade Chorus, the Rowan Youth Orchestra and members of the Rowan All-County Band.

For Petty, it’s his first time playing with a symphony orchestra.

Petty compares the experience ahead of him to racing, of course. He drove race cars at tremendous speeds with a bunch of other professional drivers and got paid for it. Now imagine an amateur driver being asked to jump in a race car and compete on the same track with the likes of Jimmie Johnson, Joey Logano and Kurt Busch.

That amateur driver is him, Petty says, when it comes to singing and playing his guitar with a professional orchestra.

“The closer it gets, the more nervous I am,” he says.

Petty also won’t have any great opportunities to practice. He will be traveling outside the country until the Friday before the Saturday event. He doesn’t even know, for now, whether he and the orchestra will be performing all three of his songs at one time, or whether they will be spread out over the program.

Petty likes that he is part of a concert bringing awareness to students and their musical aspirations. Petty is well known for establishing the Victory Junction camp for youth near Level Cross.

Close to 25,000 children with chronic or life-threatening illnesses have attended the camp since its founding in 2004. Every spring, Petty conducts his Kyle Petty Charity Ride Across America to raise funds and awareness for Victory Junction.

The motorcycle ride has raised more than $17.5 million for children with special needs. Petty’s efforts to help children were inspired by his late son Adam, who died in a racing accident in 2000 at the age of 19.

Petty, 56, grew up liking the music of singer-songwriters such as Harry Chapin, James Taylor, Carly Simon and John Prine, but country musicians such as Johnny Cash, Merle Haggard and Loretta Lynn also influenced him.

“Every song was a story, and you hung on every word,” Petty said of artists such as the late Chapin.

As a teenager, he started out trying to learn songs such as Taylor’s “Fire and Rain” or Chapin’s “Cat’s in the Cradle.” He then began taking familiar songs and writing new lyrics for them. It wasn’t long before he was composing and playing his own songs.

One of his songs was played at his 1978 high school graduation in Randleman.

Music was a big part of the Petty family. He and his three sisters all played the piano, an instrument his mother, Lynda, also learned later in life. People might not know this, but his father, Richard Petty, played the trumpet in his high school band.

Like most kids who take up the guitar, Petty says, he often pictured himself being a rock star one day. But racing always proved to be the greater passion. Since he was 4 and 5 and living among racing greats such as his grandpa Lee Petty and his father, “King” Richard Petty, Kyle followed a dream of racing stock cars.

“Nothing ever took the place of that,” he says, though his parents were always supportive of his music and his father once said publicly he would prefer Kyle to choose music over the more dangerous racing.

Music became an especially serious pastime for Kyle in the mid 1980s. In 1984, with more than 20 other NASCAR drivers, he performed on what he describes now as a “gimmick album” sold to racing fans.

The novelty record carried promotional responsibilities, which took Petty to Nashville, where he sang a song on Ralph Emery’s “Nashville Now” television program. The show was syndicated nationally and drew the attention of a Nashville manager who put together a band for Petty.

In 1986, Petty signed a deal to do an album for RCA Records. In November of that same year, he was a guest on the “Hee Haw” television show.

Soon, Petty and his band began flying to Atlanta once a week to play at a club called Stonewall’s. They also started playing concerts, becoming the opening act for country stars such as Janie Fricke, Randy Travis, The Oak Ridge Boys and Hank Williams Jr.

All the while, Petty also was racing, and sometimes winning. He had one song, “The Other Guy,” which was released for play to country music stations, but his deal with RCA never resulted in an album.

It came down to his music or racing, and Kyle says he decided “I need to be a race car driver.”

Again, he draws on racing to describe the decision he made. The late NASCAR great Dale Earnhardt Sr. liked to hunt deer, but he didn’t hunt for a living. Likewise, Petty realized he enjoyed music, and it was an escape for him, but he made his living racing cars.

“I just quit doing it,” he says of all the music obligations. “I walked away from it.”

He has never regretted that decision, Petty says.

For more than 30 years in racing, Petty has been a driver, owner and now racing commentator. He works as an analyst on television, radio and online, appearing on NBCSN’s daily show, “NASCAR America,”  and on pre-race and post-race Sprint Cup shows on NBC and NBCSN.

On the Performance Racing Network in Charlotte, where he and Morgan live, Petty is co-host for a weekly radio show called “Fast Talk.”

It was Salisbury’s Kent Bernhardt, an employee at Performance Racing Network, who talked Petty into playing with the symphony, especially after Bernhardt emphasized the involvement of all the Rowan County students.

“I said, ‘Yeah, I’m in,” recalls Petty, who often co-hosts “Fast Talk” with Doug Rice, another Salisbury resident and president of PRN.

“Are you guys serious about this?” Petty asked Bernhardt and Rice.

The three Kyle Petty songs he and the orchestra will be playing include “Movie Cowboys,” “Hard Times” and “I Promise Always,” all scored for the orchestra by John Stafford.

“I think people who write and do their own stuff — part of them is in that song,” Petty says.

The Lion’s Share Federal Credit Union is sponsoring Petty’s appearance, along with a reception and autograph session with him in the Crystal Lounge following the concert.

Donations will be accepted at the reception for the Victory Junction camp, and the Salisbury Civitan Club, longtime supporters of Victory Junction, will be serving as concert ushers.

Bill and Nancy Stanback are overall sponsors for the Family Concert, which will salute heroes.

Tickets for the Feb. 4 concert are available at ticket outlets, including the Visitors Center and Sidewalk Deli in Salisbury, Pinocchio’s in Spencer and Crescent Pharmacy in Rockwell. Information and tickets also are available by visiting salisburysymphony.org, or by calling 704-637-4314.