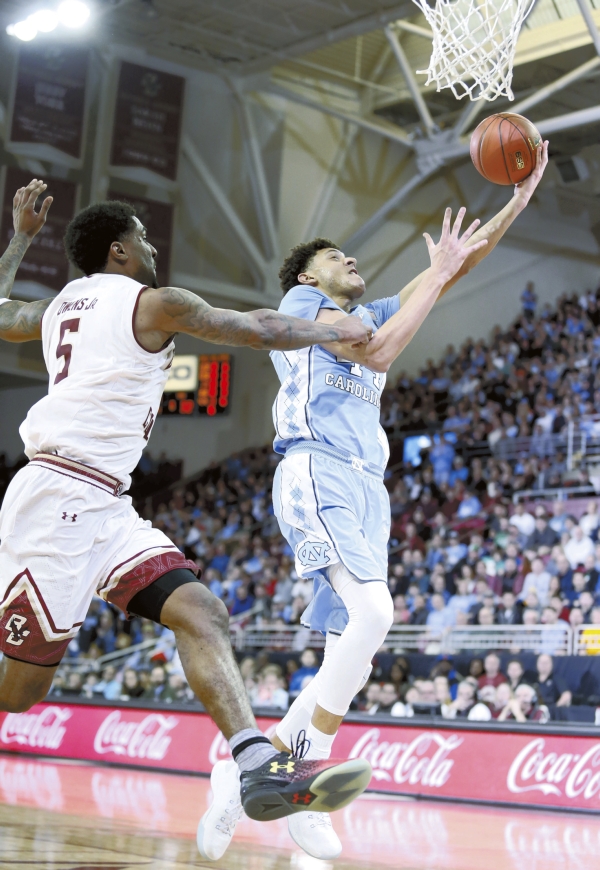 North Carolina forward Justin Jackson (44) drives to the basket ahead of Boston College forward Garland Owens (5) during the first half of an NCAA college basketball game in Boston, Saturday, Jan. 21, 2017. (AP Photo/Mary Schwalm)

BOSTON (AP) — No. 9 North Carolina managed to get away from the one who got away.

The Tar Heels beat Boston College 90-82 on Saturday despite 33 points from Eagles freshman Ky Bowman, who had originally committed to play wide receiver for Carolina before opting for basketball instead.

Bowman scored 10 straight points in the first half to erase a 27-17 deficit and helped BC remain within one or two possessions for most of the game.

“For a while it was the Ky Bowman show,” Carolina coach Roy Williams said. “He was unbelievable.”

Kennedy Meeks scored 20 points with nine rebounds and Justin Jackson scored 22 points for Carolina, which led by one or two possessions for most of the game. It was the sixth straight win for Carolina (18-3, 6-1 Atlantic Coast Conference) since a league-opening loss to Georgia Tech.

“I was so disappointed on Wednesday night, because that’s not who we are,” BC coach Jim Christian said. “To me, this is who we are.”

Bowman was the biggest reason why.

Williams said he remembered being contacted by football coach Larry Fedora, who was recruiting a wide receiver from Havelock, North Carolina, and wanted to know if Williams would allow him to play basketball, too.

Williams said OK, but didn’t give it much thought.

“At that point they told me he was going to be a great, great receiver. So I was going to do whatever I needed to do to help us get the youngster,” he said. “Tell Larry he needs to do a doggone better job of recruiting.”

Bowman changed his mind about football and about going to North Carolina as well. Asked on Saturday how close he came to playing both sports, Christian interrupted and said, “Here? Not close at all.”

North Carolina: Carolina struggled to put away a BC team that was blown out by No. 16 Virginia on Wednesday. Tony Bradley Jr., who missed two games with a concussion, scored five points in 11 minutes for Carolina.

After scoring just seven points against Virginia, Bowman went back to the red hair dye that has made him a favorite among the Conte Forum fans who wore red wigs on Saturday to copy him. He made 13 of 19 shots — including 7 of 9 from 3-point range, but also had eight turnovers.

“The black hair will never be back,” Christian said. “Even my son, 7 years old, said don’t ever let him go back.”

The Tar Heels held off BC mainly by getting second-chance points on four straight possessions to push their lead from three points to 76-70 with 3:15 to play. Theo Pinson had two consecutive put-backs before Hicks had one. He was fouled on the second offensive board and made two free throws.

The rebounds were even in the first half, 22-22, but the Tar Heels had 21-9 advantage in the second. They also had a 15-5 edge in the second half on second-chance points.

With six straight wins, Carolina has erased the damage from its ACC season-opening loss to Georgia Tech.

By Mike London mike.london@salisburypost.com SALISBURY — Put this one in the no-place-like-home file. Catawba’s women’s basketball has been decent on the road... read more