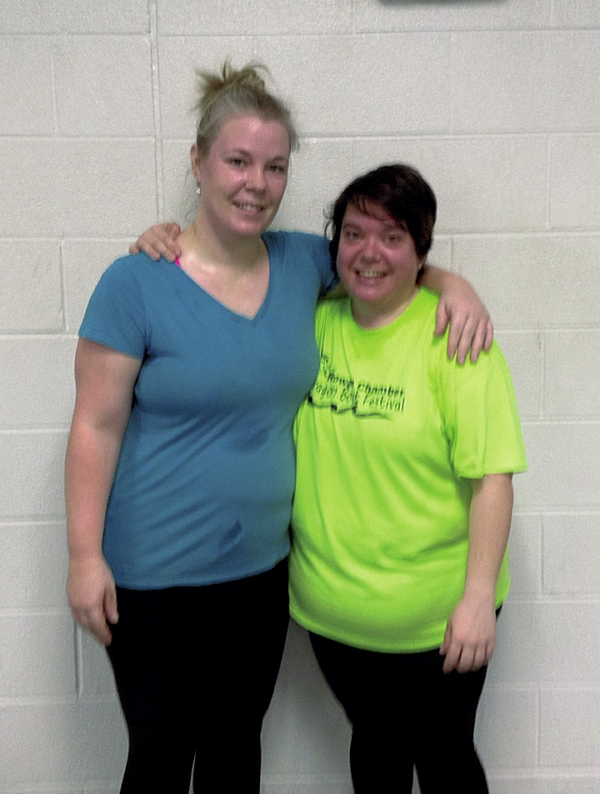 Vivian Koontz (L) and Brooke Taylor after a workout at the Hurley YMCA on Tuesday.

Already, they have begun the journey. Two women who are remarkably similar in many ways with a few unique twists. Brooke Taylor and Vivian Koontz are committed to making big changes in 2017. Both have jobs that they love and support from their employers as wellness training begins.

Brooke said, “I work at one of the greatest places in the county! I am the circulation supervisor at the library which means that I oversee many of the day to day operations that make borrowing items an enjoyable experience.” Brooke is 40 years old and has not been physically active until the last several months. She added, “I played softball and basketball in elementary school, but as I became more and more interested in music, I sat on the piano bench rather than being active. Working out and being in the gym are pretty new to me.” Brooke spent 12 years teaching music in a school setting.

Also inactive for much longer than she wanted, Vivian had a different path as she grew up. Vivian, now 36, was an athlete as a youngster. She played baseball with the boys from little league on up through various levels that included middle school, JV and finally with a year on the Salisbury High School varsity. Most of this was a second baseman. She later went on to play softball at Catawba College. Vivian said, “I began playing baseball at 5 years of age and played year-round, every chance I could get. I was exercising two to three times a day. I also lettered at indoor and outdoor track, volleyball and softball in high school.”

Vivian continued, “I have the best job!! I am the events coordinator for the City of Salisbury Parks and Recreation Department. I plan and implement all of the special events that the department hosts, about 20 in number.”

As always, I had Brooke and Vivian set goals for the duration of the program following their Novant Health Risk Assessment. Brooke wants to drop significant weight and lower her blood pressure. She also wants to learn to eat healthier and consistently be more active. She has set a large goal to lose 68 pounds and end up with a huge improvement in inches and BMI.

Already committed to improving her overall health in 2017, Vivian told me of some concerns early in the month. She said, “I had already decided that I was going to do better this year, but when David approached me about being part of this program, I was excited about being held accountable. Not exercising, not doing better is no longer an option for me. I have Brooke counting on me and others who will be checking in on me.” Vivian wants to lose between 35 and 50 pounds and become more toned while showing her kids that it’s important to take care of yourself.

The first workout for the two aspiring fitness fanatics was fun. OK, maybe more fun for me than Vivian and Brooke. Here are just a few comments saved from that first experience. I had them start off with a warmup and then some more serious RPM spinning on the stationary bikes. Then they took turns doing step-ups onto an eight- inch platform while holding and eventually pumping a pair of three pound weights, then increasing to five pounders. When I asked Brooke to start and told her to do 30 step-ups, she quickly replied, “I guess. Just 30?” Vivian chipped in with, “Sir, yes sir!”

When the first workout was over, I told them both that it all looked easy enough. Brooke said, “If that was easy, then I’m scared.” Vivian just said, “I’m scared.”

But they both showed up for our second session this past Tuesday. Both are already establishing their almost daily workouts. Up soon will be a grocery store tour, highlighting how to read labels and foods to avoid. Vivian and Brooke will get to spend some time with a registered dietician soon as they begin to monitor calories. We have already discussed that every calorie counts. YMCA staff will record inches and body fat for future reference.

We have two great personalities who are already gathering momentum as they begin their year of wellness which hopefully becomes a lifetime of proper choices and exercise.

We’ll see you back here in early February for January’s progress report.