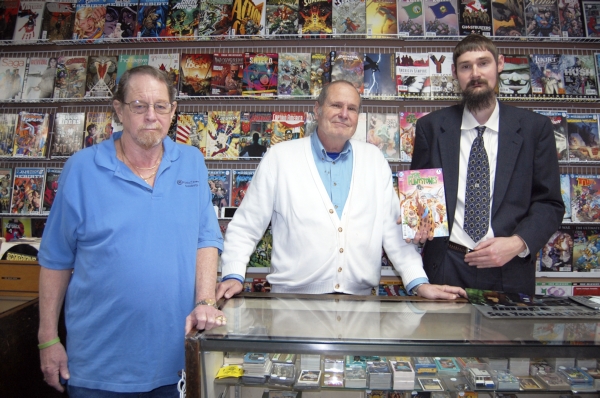 Amanda Raymond/Salisbury Post Robert Wall (left), owner, H.M. III (middle) and Henry Fairley IV (right) have reopened Collectivity the Comic Shop at 308 N. Salisbury GQ Ave. in Granite Quarry. There are comic books from 1992 to 2016 out on the floor, like the Flintstones comic book Fairley is holding up.

The shop was on West Fisher Street in downtown Salisbury for four years. After being told it had to move out, a new location was found at 308 N. Salisbury GQ Ave.

Robert Wall, owner of the shop, said it has been around since 1992. There was a break from 2002 to 2012 when the market was not good for comics, but there was a resurgence of interest after the big Marvel movies were released, he said.

“People see the movie and they want to get the book it’s based on,” said Henry Fairley IV, a comic associate.

Once Wall found a new location and was ready to reopen, the retired GE engineer had a bad fall and spent 60 days in the hospital.

Now he is back on his feet, and after a month the store is ready for customers. There are boxes of comic books down the middle of the shop, spanning from 1992 to 2014. Comics from the past two years are on shelves lining the walls.

Signed Terry Huddleston posters hang across the top of the back wall.

Longtime comic lovers and those just beginning their love affair will find Marvel, DC and independent comic series. Wall, Fairley and H.M. III offer a wealth of knowledge about comics.

The shop has been open for about three weeks, but Wall said he’s had trouble getting customers in the door.

He said the new location has plenty of parking space.

“Our old customers are going to like that,” he said.

Hours are currently 10 a.m. to 3 p.m. Tuesday through Thursday. Hours will likely be extended to four to five days a week for seven hours a day in mid-February.

Comic subscriptions will soon be available.

Fairley encouraged people to visit the shop to get “priceless treasures.”