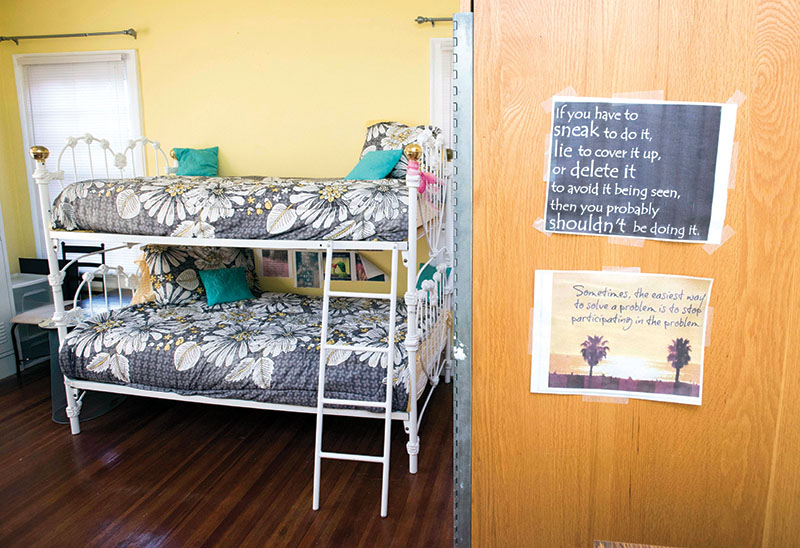 JON C. LAKEY / SALISBURY POST The bedrooms are very comfortable that have a dorm room feel. Words of encouragement are frequently found on many of the walls. Capstone Recovery, a faith-based recovery program, for women that choose to come and recover from substance abuse. Thursday, January 12, 2017, in Salisbury, N.C.

SALISBURY – Megan Larson recently went on a mission trip to Kentucky where she helped give out presents, including bicycles, coats and shoes, in a community. She recently started classes full-time at Catawba College,  majoring in nonprofit marketing.

Larson also received an internship at the United Way.

Having struggled with heroin addiction, she has been able to turn her life around with self-determination, commitment and skills she honed while living at Capstone Recovery Center for Women.

“What’s happened since I’ve been here is incredible,” she said.

Capstone Recovery Center opened to its first resident on Sept. 29, 2013. It started in a nonresidential capacity in October 2012.

The center is a transitional home for women who struggle with addictions and other life-controlling issues and want to start a new way of life.

The program is faith-based but is nondenominational.

Stepping out on faith

Executive Director Miriam Ramirez said she and the other co-founders “stepped out on faith” to open the center.

Ramirez had volunteered with a women’s shelter while living in Miami. Her husband, Dr. Oscar Ramirez, worked with Miami Rescue Mission, a one-year residential treatment center for men. He is now director of counseling for the Capstone center.

When the Ramirezes decided to move to Salisbury and were looking for a house, the property that is now Capstone was one of the houses they visited.

They didn’t buy it for their home, but Miriam Ramirez always kept the house in mind. When she  was discussing opening a transitional facility for women with Shirley Luckado, now Capstone’s curriculum director, Luckado told her that she had looked at the same property at 418 W. Innes St.

After that, it was decided.

Capstone purchased the property on Dec. 29.

Ramirez said some people thought they were crazy to move into the house. It had holes in the ceilings and walls.

With the help of donations and volunteers, they were able to make the property what it is today. It feels more like a dormitory than a recovery center.

There are four rooms for the four phases of the program. As the client moves through the phases, she gets a better and bigger room.

Each room was decorated by members of a different church. The walls are painted in colors like pink, yellow and purple.

One side of the room may have a bunk bed while the other has a single bed. The women are free to decorate the walls with paintings and pictures.

“We try to make it as relaxed as possible, not institutionalized,” Ramirez said.

A computer lab is available for the women to use.

In the first phase of Capstone’s treatment program, clients are supervised all the time and are restricted in what they can and cannot do. After the first 60 days, they are allowed phone privileges and a Saturday night pass to visit their families if it is a safe environment.

Phase 2 is about integrating the women back into society. Clients get a little more liberty and are allowed to go out on their own and document their outings in a log book. They can go out with friends once those friends are screened.

In Phase 3, the women apply to go back to school or get a job. In Phase 4, they are expected to be either starting a semester of school or working.

The program takes from seven to 18 months to complete. After graduating, the women may continue living at the center to save money, but if they have a job they are asked to pay $10 for rent.

Clients take classes on subjects such as life skills and financial planning. They are sent to other programs in the community that help with career and job-seeking skills.

The women attend counseling sessions and also volunteer in the community.

More than 40 women have participated in the program with a 75 percent success rate. Many clients choose to stay in Salisbury after finishing the program.

All of the services at Capstone are free.

The facility does not provide drugs for detoxing; clients must be willing to quit cold turkey. Even nicotine patches are not allowed.

Ramirez said the clients have to be totally committed to changing their lives.

“You have to make sobriety a priority,” she said.

Ramirez said going through the program is not easy. The center is not secluded like some other facilities are, so temptation is always there.

Larson said that is what she liked about the center. Secluded centers that control patients’ every action may work for some people, but they did not work for her. She said at Capstone, she was able to take baby steps back out into the world. Now that she is allowed to go wherever she wants without supervision, she knows how to handle temptation.

She said that because Capstone gradually gave her more freedom, she was able to build her confidence. She learned how to live a normal life without turning to drugs, something she never truly knew how to do before.

Another woman currently living at Capstone was not comfortable giving her name and asked to be called Mary.

Mary arrived at Capstone a couple of weeks after Larson struggling with an addiction to alcohol. She had been in a program that isolates clients. Though she does not regret going through that program because it taught her about Jesus Christ, she said it did not work for her.

Mary said she was nervous about being so close to temptation at Capstone, but she has been able to develop a stronger foundation.

“It is a safe, accountable place,” she said.

The counseling helped her get to know herself and understand why she turns to alcohol. She said she has also developed a deeper relationship with God.

Her passion for music was reignited, and she now plays acoustic guitar in the praise band of a local church.

While Mary enjoys playing the guitar, Larson said she likes working out and eating healthfully. Most women at Capstone find a hobby because television isn’t allowed except on weekends.

Ramirez said the women have to learn to replace unhealthy habits with healthy ones. And that’s the point of the program – giving the women the tools they need to live a healthy life in the real world.

“This is a place where you really see the transformation of these women,” Ramirez said.

Linda Cauble, a volunteer teacher and secretary of the board of directors, said she learns just as much from the women at Capstone as she teaches them.

“I can really see Jesus in their lives,” she said.

Ramirez said one of her goals for the future is to start a prevention program in local schools. The women could go to schools and tell their stories in the hopes that they would discourage students from going down the wrong path.

Ramirez said she wants to start renovating the grounds at Capstone and install a new heating and air conditioning system.

Ramirez said she knows God had a hand and continues to have a hand in all of Capstone’s success. The community also has been supportive.

Capstone hold its fifth annual “You Are Precious in His Eyes” fundraiser from 2 to 5 p.m. Feb. 4 at the Country Club of Salisbury, 747 Club Drive. The cost is $25 per person.

Ramirez said the benefit will have a ’50s theme, with workers dressed in’50s attire and music from the era.

Former and current Capstone clients will give testimonies, and there will also be a silent auction.