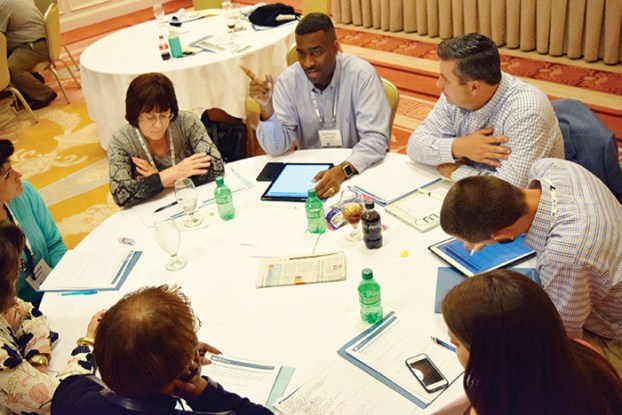 Teachers share their ideas and concerns at a retreat in Chapel Hill. Seven teachers arrived for the retreat's first session Friday morning, and will participate in a second session Saturday morning. Rebecca Rider/Salisbury Post

CHAPEL HILL — Friday, the Rowan-Salisbury Board of Education and Superintendent Dr. Lynn Moody, along with seven Rowan-Salisbury teachers, gathered in Chapel Hill to “see things from a bigger perspective,” Board Chair Josh Wagner said. Also joining them were several teachers and the school board from Alvin Independent School District in Alvin, Tex.

The local board’s retreat began Thursday afternoon with a discussion with the University of North Carolina’s dean of education, Fouad And-El-Khalick.

Friday morning, they were joined by teachers and the representatives from Alvin to hear a presentation by James H. Johnson, Jr., a professor at UNC. Johnson specializes in demographics, diversity and economic development and he is currently the William R. Kenan Jr. Distinguished Professor of strategy and entrepreneurship and the director of the Urban Investment Strategies Center at the Frank Hawkins Kenan Institute of Private Enterprise.

Johnson spent the morning dissecting census data and demographics to show how the nation is undergoing a “profound change in the racial complexity of our population,” and how student populations have the changed over the last few years.

Now, the average student walking through the front doors of a school is non-white and multiracial.

“The kids walking into your school won’t fit into the nice and neat little clusters you’re trying to fit them in, and they won’t let you fit them into clusters,” Johnson said.

The average student is also poor, and likely faces other limiting factors. They may be in a district with low funding, from a racially isolated school, face serial suspension from schools or be faced with an aging, predominantly white, voting population that’s unwilling to support education. Many may be faced with more than one of those challenges.

“Those kids are between a rock and a hard place through no fault of their own,” Johnson said.

And they are, increasingly, becoming the norm in public schools.

The face of families is changing, too — more grandparents are raising their grandchildren, Johnson said. Census data shows that between 2001 and 2010, there was a 42 percent increase in grandparents being the primary caregiver. Roughly half of those grandparents were between the ages of 30 and 50, Johnson said.

After walking the group through demographic research, Johnson concluded that older models of education and workforce management no longer worked. It’s not enough to prepare students for a specific career, when the last three recessions have affected predominantly white-collar jobs and service jobs, when fields are changing so quickly and when students are forced onto a global stage.

Instead, students have to be prepared to deal with “certain uncertainty.”

“In this economy, education is necessary but it may not be sufficient to thrive and prosper,” he said.

“I think we’re making a serious mistake preparing kids for a specific occupation,” he said.

Instead, they need to be prepared to thrive in an uncertain future and to adapt to whatever the workplace throws at them.

After Johnson’s presentation, teachers and board members gathered in groups to discuss the information.

“I think it causes you to step back and question how you apply things to education,” Wagner said of the session.

At a small table of Rowan-Salisbury representatives, teachers agreed that one of the main take-aways was that teachers need to understand a student’s culture and home life in order to understand the student.

Moody said the information made her wonder if the district was being flexible and thinking differently when it came to policies. She referenced a school policy that children lining up for lunch must remain quiet.

“There’ve been times I thought, ‘Why? Why is that policy there?’” She said.

Jennifer Barbee, a teacher at Corriher-Lipe Middle, said the session was great at helping educators identify problems and issues — but not necessarily at coming up with a strategy.

“But then what?” she wondered. “What’s the best way to implement something new?”

The crux of the issue, they said, was in learning to interact with children as individuals. Board member Dean Hunter said that a personal relationship can go a long way in helping a struggling child, or in helping a child succeed. But there are problems.

“Everything we do…is all standardized,” he said.

Having to meet state requirements can tie teachers’ hands when it comes to meeting student needs or helping with important skill sets like soft skills.

“The things that are being tested are not always the things that matter,” Moody said. “And teachers feel so much pressure from the test.”

Teacher Ryan Shelton said that, to him, students were more important than any test they might be taking.

“I think the human factor has to stay at the front,” he said.

The group also discussed the importance of students having a strong role model, and the scarcity of male teachers.

All in all, it was “a lot to digest” Moody said, and there are no answers yet. But there is, perhaps, a start.

“Unfortunately, there’s so much of it, and there’s such a hill to climb…all we can do is continue to improve,” she said.

“I think it’s a good day anytime we have a chance to collaborate and brainstorm about our student needs,” Wagner said.