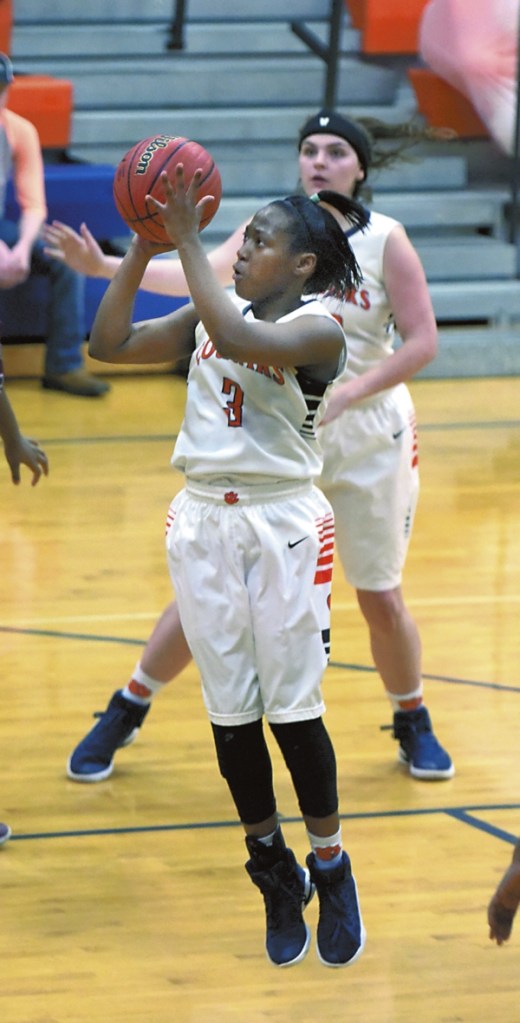 Wayne Hinshaw/for the Salisbury Post ... Carson’s Olivia Gabriel (3) shoots a jumper in the lane during last night’s game. Gabriel scored 26 points and went over 1,000 for her career.

CHINA GROVE — Carson junior Olivia Gabriel agreed that reaching the 1,000-point milestone wouldn’t have meant much if her team had lost to Robinson on Friday.

So Gabriel, who only needed one point for 1,000 for her career, made certain Carson won the South Piedmont Conference contest. She scored 26 points, 14 in the fourth quarter, as the Cougars held off a talented, improving Robinson squad, 59-49.

“I tried hard to focus on just playing the game, and it helped that we were playing such a good team,” Gabriel said. “I was able to think about getting the win and nothing else. It turned out to be a good game for all of us.”

Gabriel took care of the 1,000th point three minutes into the action. Destiny Jackson poked a ball free on defense, and Gabriel scooped it up and muscled in a  layup. Celebratory balloons flew everywhere for a few seconds. Gabriel is the program’s fourth 1,000-point scorer but the first to reach that plateau during her junior season.

“I saw everyone bringing in balloons before the game,” Gabriel said with a laugh. “But it was still a nice surprise.”

With the celebration taken care of, Carson (14-3, 9-2 SPC) settled down to the task of  finishing off a season sweep of the Bulldogs (6-6, 5-6 SPC). Robinson’s 15-year-old guard Jada McMillan made it challenging by scoring 24 points. She kept her team in the game until she fouled out with 1:29 remaining.

“She made some really tough shots,” Carson coach Brooke Misenheimer said. “We didn’t have a good answer for her.”

Carson took the lead for good late in the first quarter and moved ahead 14-8 at the first break on a 3-pointer by tiny freshman Maci Cooper.

With Robinson employing a zone defense  in the second quarter, Jackson made an impact with two wing 3-pointers. Gabriel added a straight-on 3-pointer off a kickout pass by McKenzie Gadson, and the Cougars took a 30-21 lead to halftime.

“They messed us up and were turning us over a lot with their 1-2-2 press, even though we’d worked hard on it,” Robinson coach Justin Thomas said. “Then we tried a zone defense because we wanted to make them beat us from the 3-point line. Unfortunately, they made quite a few.”

“We hit a lull, ” Misenheimer said. “We allowed them to get back in it.”

Desperately fighting to hang on, Carson went to its delay game early in the fourth quarter. That meant putting the ball in Gabriel’s hands 90 percent of the time.

“That’s a great situation for Carson to have a player like that to finish off games,” Thomas said. “Gabriel is disciplined and experienced. She’s  not going to make bad decisions or take bad shots and she makes her free throws. Her teammates do a great job of setting screens for her. You play good defense and fight through one screen, and then, bam, you’ve got to fight through another one.”

Gabriel owned the fourth quarter, and that was fitting on her historic night. In the final quarter, she got two points on a clutch runner in the lane with 6:20 remaining for a 46-40 lead . Then she added a dozen ice-water free throws as the Cougars finally pulled away.

“It was a really nice win for us against a good team,” Misenheimer said. “Olivia played well, and a lot of girls set monster screens for her. Olivia’s teammates are as excited about the 1,000 points, as she is, and they should be. They’ve all been part of it.”