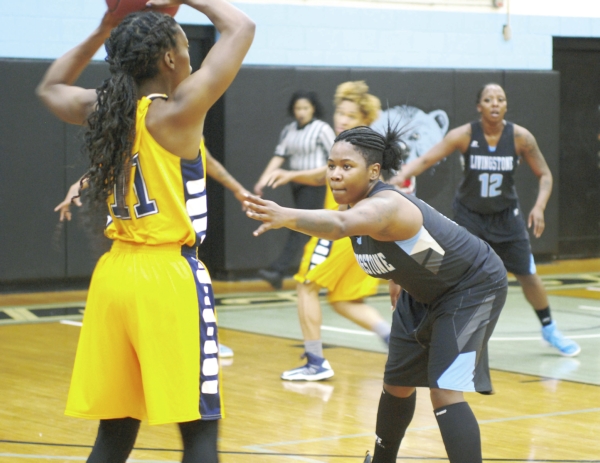 Then things went south pretty quickly, especially when the second half turned into a foul-fest. J.C. Smith prevailed, 81-69, as five of Livingstone’s nine players fouled out, leaving just four on the court at game’s end.

The Blue Bears were whistled for 33 fouls, compared to 20 for J.C. Smith. And the Golden Bulls made 10 more free throws (30) than Livingstone attempted (20).

Three-fifths of the Livingstone (8-9, 3-4 CIAA) starting lineup fouled out, but just as important was the time those players (Zena Lovette, Brittany Taylor and Bria Patterson) spent on the bench with three and four fouls. Without them, the Blue Bears struggled to find enough offense.

“We fought to the end and the girls kept their composure,” said Livingstone coach Tiffany Silver. “We controlled the things that we could, but at the same time, there were things that we had no control over.”

But the Golden Bulls, behind Krista White and Kendall Adams, had a nice run in the second period (24-12), cutting the deficit to 38-31 at halftime.

“We definitely came out in the first quarter, commanding the game, but a team like Smith, coached so well and very disciplined, you knew that their run was coming,” said Silver. “So, by no means, did we think the game was over at 26-7.”

JCSU coach Stephen Joyner Jr., knowing that his team had more depth, was hopeful of getting back into the game quickly.

“I was concerned with the way that Livingstone was shooting the ball early,” said Joyner. “Could we come back from a 20-point deficit? I felt that we were deep enough to do so. I thought that we had an advantage because we go 10 players deep and they go about six deep. And that did play into our favor.”

After 21 total fouls were called in the first half, the officials started calling the game a little tighter, and that number went all the way up to 53.

Taylor, a senior guard, picked up her fourth foul just two minutes into the third period and had to take a seat on the bench. Lovette, who had 16 first-half points, followed not long afterwards.

Meanwhile, the Golden Bulls found their offensive rhythm and forged ahead on the scoreboard with 5:30 left in the third period, 46-45 — on two foul shots from Blaire Thomas.

“Once they got into foul trouble, I told our team to take everything to the basket and don’t shoot jump shots,” added Joyner. “And they listened to me and it got us in somewhat of a groove. They (Livingstone) got a little tired and that’s when we scored 30 points in the third quarter.”

The JCSU lead reached 14 points, midway through the final period, but the Blue Bears refused to quit, even though the foul-outs had begun.

Still, Livingstone was able to cut the margin to eight points, 74-66, when Kenetria Redfern dropped in two free throws at the 2:20-mark. But the Golden Bulls then pulled away again, scoring seven of their final nine points at the foul line.

“They worked hard,” Silver said, about her team. “It’s a tight-knit group and they’re going to fight to the end. But 13 more fouls is a big difference. I don’t want to take anything away from from Coach Joyner and J.C. Smith, but they had one more field goal than us and won by 12 points, so that math doesn’t work.”

Lovette, a sophomore guard, led all scorers with 24 points in just 24 minutes played. She was 8-for-12 from the floor, including 6-of-8 on 3-pointers.

“I’m proud of our team,” added Joyner. “We’ve talked about the fight that is needed to be a championship-caliber team. That’s their goal.”

Livingstone returns to action on Monday night at Shaw, a doubleheader that was postponed on Jan. 14.