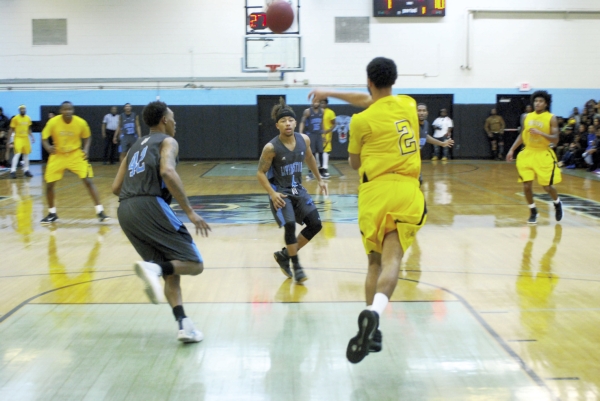 SALISBURY — Not many people knew who Livingstone freshman Roger Ray was when he entered Saturday’s game against visiting Johnson C. Smith.

But after his last-minute heroics in a 68-67 CIAA victory, the overflow crowd at New Trent Gym isn’t likely to forget him.

“I wasn’t having a good game,” Ray conceded after the Blue Bears (6-11, 3-4) improved to 2-0 against Southern Division teams. “I felt I was being passive, settling for jump shots and not getting to the basket. And we were letting them hang around, when we should have put the game away. I kept saying in my head, ‘I’ve got to find a way to contribute.'”

It took a little sit-down on the bench and stern chat with coach James Stinson to ignite the 5-8 guard’s pilot light. He responded by scoring Livingstone’s last seven points — all in the final 1:04 — and won the game with a driving layup with just 4.4 seconds hanging on the clock.

“I had to get after him a bit,” Stinson said. “I hope we all grew up a little bit tonight.”

“The last three minutes,” coach Steve Joyner, Sr. said afterward, shaking his head in the front seat of the team bus. “I thought we had it, but we gave it back with turnovers and misses from the free throw line. Much credit to them. They hung in there. We didn’t.”

It was Ray, the Raleigh native who finished with nine points in 18 minutes of playing time, who triggered Livingstone’s comeback. First, he drove for a standard-issue layup that trimmed the deficit to three with just over a minute to play. Following a JCSU free throw and a Livingstone timeout, he penetrated from the right side, kissed a layup off the glass and got hacked by Robert Davis, the game’s high scorer with 20 points. When Ray completed a three-point play, the Blue Bears were within 67-66, with 22.4 seconds to go.

“Coach told me to get to the basket, no matter what,” he said. “At that point, I wanted the ball in my hands.”

Next came a defensive gem by LC forward Jimmy Wilson. Smith’s Christian Williams tried to inbound the ball from beyond the end line, but his attempt was deflected by Wilson — who smashed the ball into Williams’ midsection for a crowd-pleasing turnover. “I put pressure on the ball and read his eyes,” Wilson explained. “First it popped up straight into the air. Then as fast as I could, I hit it into his stomach.”

The Blue Bears failed to capitalize on the turnover when Ray missed a shot in traffic, but got the ball back after Smith’s Aaron Adair botched two free throws with less than 15 seconds remaining. “I knew it was over right there,” Ray insisted. “I had missed one chance already. I wasn’t missing again.”

Armed with a dose of old-school determination, Ray delivered on his last shot of the game — driving left-to-right across the lane and banking it home from the doorstep.

“We always look for him in those situations,” Wilson said. “Even though he didn’t have his best game, he still came through in the end. He stayed calm and pushed through all the adversity.”

The Golden Bulls streak downcourt for one last chance, but turned the ball over again before getting a shot off.

NOTES: Ramel Belfield (12 points), Cameron Burhannon (11) and David Duncan (10) gave the Blue Bears three scorers in double figures. … LC plays a makeup game at Shaw on Monday night, then visits St. Augustine’s on Wednesday and Winston-Salem State next Saturday. … J.C. Smith fell to 1-2 against Southern Division opponents. The Golden Bulls made only one of six free throws in the final minute and were 22-for-31 overall. … Smith junior Malik Ford, a former North Rowan High School star, came up with five points and two rebounds in 11 foul-plagued minutes. He picked up his fourth personal just 1:03 into the second half and never returned.