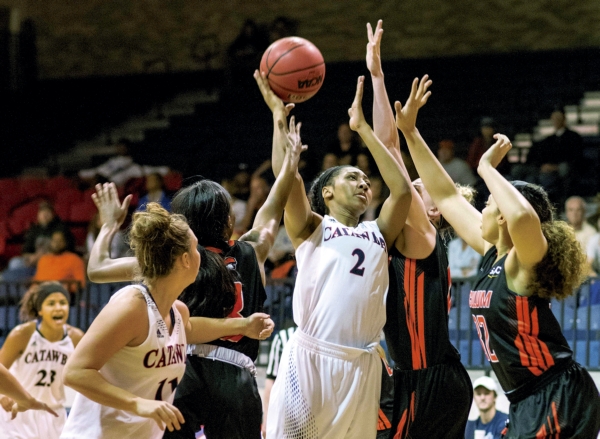 JON C. LAKEY / SALISBURY POST In heavy traffic, Catawba’s Brianna Hodges (2) puts up a shot over a lot of hands during Saturday’s game against Tusculum. The Indians won the game easily, 80-51 .

SALISBURY — Put this one in the no-place-like-home file.

Catawba’s women’s basketball has been decent on the road  this season but world-beaters at home.

Mild-mannered secretaries have transformed into Supergirls once they get in the friendly confines of Goodman Gym. After an 80-51 dismantling of Tusculum on Saturday afternoon, the Indians are 8-1 at home, with the only loss coming against unbeaten and second-ranked Virginia Union.

Most important, Catawba is 5-0 at  home in the South Atlantic Conference.

“We know we have to protect our home court,” Catawba coach Angie Morton said. “You look at the stats and you look at the records and we should beat Tusculum at home. But we also know what Tusculum is capable of. We knew we couldn’t have a slip-up.”

“They made a lot of 3-pointers early in the game there, and we didn’t want to let them have anything like that happen today to  get them going,” Morton said. “We wanted to come out and make a statement.  And we did. Bri Johnson was ready to play. Elizabeth Webb was making shots. Terri Rogers was scoring inside.”

Everything went smoothly, like a play where everyone remembers their  lines.

“We knew the scouting report and we followed the game plan,” Catawba forward Marshauna Butler said. “We executed on offense and everyone played confidently.On defense, we knew we had to limit  10 (guard Sydney Wilson) and 11 (6-foot post Kasey Johnson), and we did.”

Wilson scored 14 points but on 4-for-12 shooting. Johnson wasn’t a factor with four points and four rebounds.  Benedicta Makakala led the Pioneers with 15 points, but they shot just 34 percent for the game.

Johnson, who scored 17, and Webb made three 3-pointers each. Catawba shot 9-for-17 from long distance, with Butler, Serena Brown and Kaitlin Stevenson, all going 1-for-1 on 3s. Brianna Hodges, showed off a variety of post moves and scored 12 points.

The margin of Catawba’s victory could’ve been much worse, but Butler  who had a terrific all-round outing (12 points, seven rebounds, five assists) played only 17 minutes. Terri Rogers, who had 12 points on 6-for-8 shooting, also sat down for good after 17 minutes.

Butler, a junior who transferred to Catawba last season after beginning her college career  at Division I Stony Brook, is athletic and has plenty of offensive upside. She was a 3-point bomber in high school, but as a member the Indians, who often play three guards in Johnson, Webb and Brown, Butler has adapted to more of a power forward role. She’s fourth on the team in scoring and second in rebounding behind Rogers.

Butler shot 4-for-4 on Saturday, made only one turnover and played close to a flawless game.

“She had a good defensive day, a good rebounding day, and she helped us get a lot of high-quality shots with her passing,” Morton said.

Catawba had 23 assists on 30 buckets,. That helps explain how the Indians shot a sensational 58.8 percent for the game.

While the win allowed Catawba to maintain its position in the standings, the Indians weren’t able to move up. The top six SAC teams beat the bottom six on Saturday. Catawba  is still part of a four-way tie for second place, three games behind frontrunner Lincoln Memorial.

The good news? Catawba is home again on Wednesday against Coker.