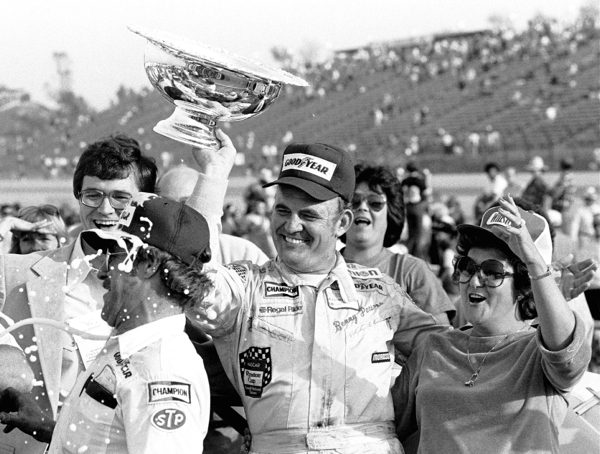 FILE - In this Nov. 18, 1979, file photo, NASCAR driver Benny Parsons, second from right, celebrates his victory in the Los Angeles Times Ontario 500 NASCAR auto race with his wife, Connie, and members of his pit crew at Ontario Motor Speedway in Ontario, Calif. The late Benny Parsons will be inducted into NASCAR's Hall of Fame on Friday night, Jan. 20, 2017. (AP Photo/File) FILE – In this March 18, 2006, file photo, Benny Parsons smiles as he is introduced before the start of the NASCAR Busch Nicorette 300 auto race at Atlanta Motor Speedway in Hampton, Ga. The late Benny Parsons will be inducted into NASCAR’s Hall of Fame on Friday night, Jan. 20, 2017. (AP Photo/John Amis, File)

For The Associated Press

CHARLOTTE (AP) — Benny Parsons made it to the NASCAR Hall of Fame because of his victories on the track and his work as a broadcaster after he retired. He is there also because of one other factor – the kindness of his competitors.

Don’t misunderstand, he wasn’t voted in simply because people liked my father. During his 19-year driving career, the man most everyone called “BP” won 21 races, including the 1975 Daytona 500, and the 1973 NASCAR championship. In fact, he was the only Hall of Fame-eligible driver who had accomplished those two feats who had yet to be selected.

He’ll be inducted Friday night, along with Rick Hendrick, Richard Childress, Mark Martin and Raymond Parks, and he’s included in that group on merit. Yet the way he treated others in the sport over the years ended up helping him as much as it did them.

His championship is a great example. The 1973 season ended with a race at Rockingham, about 10 miles from where BP’s underfunded team was based.  All he needed to do to clinch the title was to finish the race, thanks to the convoluted points system used at the time.

His crew had everything it needed to fix nearly anything that could go wrong during a race. As fate would have it, no one could have anticipated one item that would be needed: a replacement roll cage.

On the 13th lap, my dad hit a car which had spun in Turn 2, ripping the entire right side away from his car. The damage included the steel bars used to reinforce the driver’s cockpit, which were peeled away from the chassis and laying on the track.

The car was towed back to the garage, where BP and his crew dejectedly pondered what they could do. Suddenly, Ralph Moody, a founder of the famed Holman & Moody organization that dominated NASCAR for much of the 1960s, had a solution. For some reason, the car of Bobby Musgrover still was sitting in the garage after failing to qualify. Moody had done some work for Musgrover, as he had for my dad’s L.G. DeWitt Racing Team, so he told everyone to use the parts from the idle car.

Pit crew members from other teams pitched in, joining a large group of mechanics around the battered car. And 136 laps later, it rolled back on the track to complete enough laps to secure the title.

Something such as this would be unheard of now. Rival teams providing manpower to help someone else win the championship? Not a chance. But they did it for Benny Parsons, largely because they knew he would have done it for them.

The generosity of others also helped my dad to his greatest victory: the Daytona 500. He wasn’t quite fast enough that day in 1975 to keep up with David Pearson, and as the race wound toward conclusion, he found himself about 5 seconds behind in second place.

But Richard Petty, laps behind after some troubles earlier in the race, jumped in front of BP and waved to him to join up in a draft. Soon enough, they began to track down Pearson, and with three laps remaining, the margin was only 2 seconds.

Perhaps it was the pressure Pearson felt from behind, or perhaps it was just racing circumstances. Whatever the reason, Pearson bumped into the lapped car of Cale Yarborough and spun on the backstretch, effectively ending his race.

My dad — still running in Petty’s wake— motored past, and since there were no overtime rules at the time, he went on to win. Petty certainly didn’t have to do that, and part of his motivation might have been to keep Pearson, his top rival at the time, from winning.

Regardless, it was another life-altering moment for BP, and it came about partly with the help of others.

I’ve thought about that a lot in the past few months, since my dad’s selection for the NASCAR Hall of Fame .  For years, I thought maybe he had been too nice when he was a driver, that perhaps he could have had more success if he had been a little more selfish.

Yes, maybe he would have won a race or two more.  But at what cost? He had the respect of everyone in the garage, people who readily jumped in to help him when he needed it most.

My dad, who died 10 years ago after complications from lung cancer, would say that was worth more than a couple more trophies and checkered flags, worth even more than an earlier induction to the Hall of Fame.

He would say it means everything.

Keith Parsons spent six years as a sports writer for The Associated Press and will be present Friday night for his father’s induction into the NASCAR Hall of Fame.