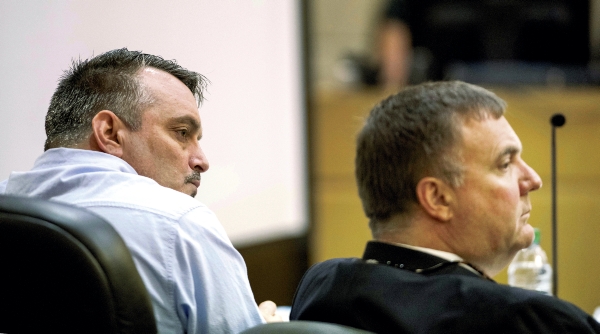 SALISBURY — Candace Steen Swift, the daughter of Sandra Steen, deliberately acted as a buffer between her brother and her mother as Sandra Steen lay in a hospital bed badly beaten and seemingly on the brink of death following a brutal assault Nov. 5, 2013.

Her attacker, Rowan investigators said, was Sandra Steen’s son, Jeff. The 43-year-old Steen has been in the Rowan County jail since his Nov. 21, 2013, arrest. Investigators said Jeff Steen attacked his mother from behind and beat his grandfather, 87-year-old J.D. Furr, to death.

Candace Swift testified Thursday about her distant relationship with her brother and how while her mother, Sandra Steen, was in the hospital, she became protective of her. There was a moment at Sandra Steen’s bedside that Jeff Steen asked to speak with his mother alone in her hospital room and Candace Steen told him no.

She told the court her mother didn’t want to be left alone with her brother.

When asked about her grandfather, Swift said she considered J.D. Furr a hermit whose farm was his “safe place.”

She said she learned more about him later in his life while sitting at his kitchen table talking. She said they talked about how he made his money by raising and selling cows and selling vegetables from his garden.

“It was his pride,” she said of the farm.

Swift later testified she didn’t see her grandfather regularly, but probably saw or spoke with him at least every other month.

Darrin Jordan, Jeff Steen’s attorney, asked Swift if she would be surprised to know her grandfather kept a journal when someone came to the farm to visit him and she was only named in it twice in 2013. She said her grandfather was an honest man and if he said it, then it was true.

Swift confirmed what others have said in court that J.D. Furr always carried a small pistol in his pocket and that he was cautious about who he allowed on his property. She also corroborated other testimony saying her grandfather was not a morning person and did not wake early, but he always took his time in the morning, prepared breakfast and read his Bible.

She said she’d always known him to carry large amounts of cash in his wallet, much to his family’s insistence that he not carry so much.

Swift said she was not aware of whether her brother owed their grandfather money, but he did owe their mother, Sandra Steen, money. She added that their mother was working a full-time job and taking on overtime to help Jeff pay his bills.

“He was continuously one-to-three months behind. She was constantly taking care of it,” Swift said of her brother’s car payment.

Swift said she told her mother that she should make her brother more responsible for his own bills.

Candace Swift recounted how she discovered her grandfather was dead and her mother assaulted.

She said she received numerous calls from a number she didn’t recognize. She did not pick up because she doesn’t answer unknown numbers. Swift said she then received a text message from Kevin Morton, a man who was taken in by her family. Morton grew up with the Steen children.

“He said, ‘your grandfather has been murdered. Your mother is in the hospital,’ ” Swift said.

Swift rushed to the hospital, thinking she only had moments with her mother. Her mother, Sandra Steen, did not die, but as Swift described, was pretty beaten up.

Swift said her mother was still wearing her blood-covered watch, her hands were dirty, her face and eyes were swollen. Sandra Steen’s eyes were swollen shut, her daughter recalled the day she first saw her.

“Her hair was red, which her hair was not red. It was soaked in dried blood from one end to the other,” she said casting a glance at her brother.

On the second or third day in the hospital, Swift said she and her then-girlfriend “couldn’t tolerate the smell of her hair,” and carefully washed Sandra Steen’s blood matted hair.

The women also found more injuries at the back of Sandra Steen’s head, Swift said.

Swift and her then-girlfriend cared for Sandra Steen from November 2013 to January 2014, Swift testified. She said afterward she begged her sister, Bridget Steen, to come help.

She said Jeff Steen would look after the animals on the farm, but he regularly asked to help his mother. Swift said she carefully told her brother it was better that she and her sister see to her mother because they could help her bathe.

Most of the people who were there at the farm were there because they just wanted money from Furr, Swift said, by working on the farm or by “swindling” her grandfather.

Much of Thursday morning’s testimony came from Adrienne Beaver Eller, the ex-girlfriend of Jeff Steen. She read from multiple text messages that she and Steen sent to each other, mostly regarding bills and why he couldn’t help pay them.

Eller said she repeatedly told Jeff Steen he needed to help her. She testified that Steen made at least double what she made and should’ve been able to help her. Instead, Eller said, she was the one paying the majority of the bills and he helped occasionally. She works as an assistant at her father’s Stanly County law firm. She estimated in 2013 she made about $10 an hour. She said Jeff often worked overtime and had a good-paying job.

Jurors heard about Jeff Steen’s bills via the many text messages Eller read in court. She dated Steen for nearly three years. The couple lived with her three children and Steen’s then 16-year-old son, Jordan, rent free in a home her parents owned in Albemarle.

Eller believed Steen would pacify her saying he would help pay, but then avoid the topic of bills altogether.

Jeff Steen owed back taxes in the amount of $752.56, child support, had written bad checks, had gotten into a wreck, his son had been in a wreck and he made car payments to his mother on two vehicles.

Jeff Steen admitted to Eller that he could stand to save money by not buying things from online auction sites.

Steen’s father, Billy, also testified he never loaned his son money because “I didn’t have no money to loan him.”

“He should’ve been making his own payments and buying his own car,” Billy Steen said of his son.

Billy said when he first saw his ex-wife Sandra Steen in the hospital, “she looked like she was gonna die to me.”

When asked if Sandra told him who attacked her, Billy Steen said, “my son, Jeff David Steen.”

Ex-girlfriend of Jeff Steen: They argued about money often