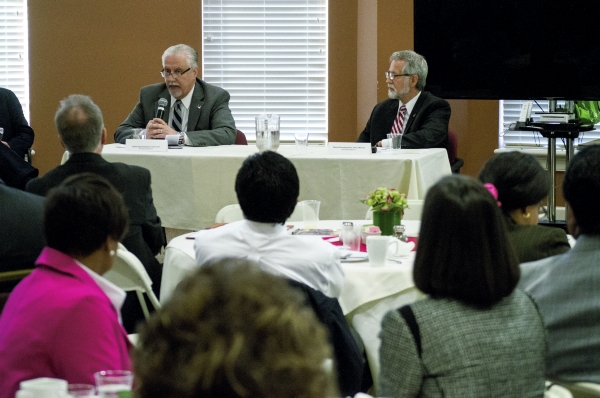 The Rowan County Chamber of Commerce held its State Legislative Breakfast at Trinity Oaks. The meeting was held in conjunction with the Power in Partnership breakfast this year.

Reps. Carl Ford and Harry Warren talked about the work they will be doing.

Sens. Andrew Brock and Tom McInnis had planned to attend but were called to a special session.

Terry Osborne, division chairman of business advocacy for the chamber, introduced Ford and Warren and said he is excited about the collaboration of municipalities and county governments.

“Since my involvement in politics in the late ’70s, I have never seen this area so excited. There’s communication, there’s dialogue,” he said. “From our municipalities on up, I think this is the greatest time that I’ve ever been a part of Salisbury-Rowan that I can remember.”

Ford said he has been working on transportation issues for the area.

“Transportation in southern Rowan and northern Cabarrus right now is a nightmare, but it’s on the way to becoming great,” Ford said. “Everything that I pushed for and wanted is happening now.”

Some of that includes widening Interstate 85 and the interchange between Kannapolis and China Grove.

“I believe that will happen soon, and I know the airport is booming and growing and I think it will continue to do so,” he said.

Ford cited cuts in corporate and income taxes and the more than $2 billion in a rainy day fund as accomplishments.

He said he expects more positive things in the next year, including in the area of transportation and tax reform.

Warren also sees positive things for the state. He said he is working on about 15 bills. The first will focus on giving the Rowan-Salisbury Schools flexibility in its calendar. That can have positive impacts on things such as summer school students’ achievement and other student programs, he said.

“To have a statewide policy that mandates no calendar flexibility, I think it’s overreaching because we are a very diverse state in many, many ways,” he said.

If the bill does not pass, Warren has another bill that would create a five-year pilot program to study the academic impact of calendar flexibility.

Warren shared some highlights of a report on the economic condition of the state for the first three quarters of the fiscal year. He said revenues were $322 million, or 3.1 percent, above the six-month revenue forecast.

“The economy’s on a solid footing. Steady growth is expected to continue throughout the fiscal year, and improvements in employment will set the stage for faster overall wage growth,” he said.

Warren said the state is $158 million ahead of projections in the first quarter of the fiscal year and $174 million ahead in the second quarter.

“And that’s important because it shows an upward trend,” he said.

The chamber distributed handouts on the state priority projects for 2017. For transportation and infrastructure, some priorities listed include extending the runway at the Rowan County Airport and acquiring 25 acres next to it; completing construction of the four lanes of I-85 from Salisbury to Charlotte and the Southland exit at I-85 and Old Beatty’s Ford Road; and expanding utility services along the I-85 corridor for economic development opportunities.

For education, state priority projects for 2017 include refining the A-F school grading system to reward academic improvement and increasing pay for educators while adjusting the principal salary schedule to make it competitive with other states.

Lastly, the priority projects for health care include supporting Medicaid reform that allows providers to lead a cost savings transformational model and supporting incentives for businesses that offer wellness programs for employees.

The next Power in Partnership breakfast will be Feb. 16 with Henning Bruns of Daimler Trucks North America as the guest speaker.