Pastors ask for ‘truth, transparency and trust’ after autopsy release 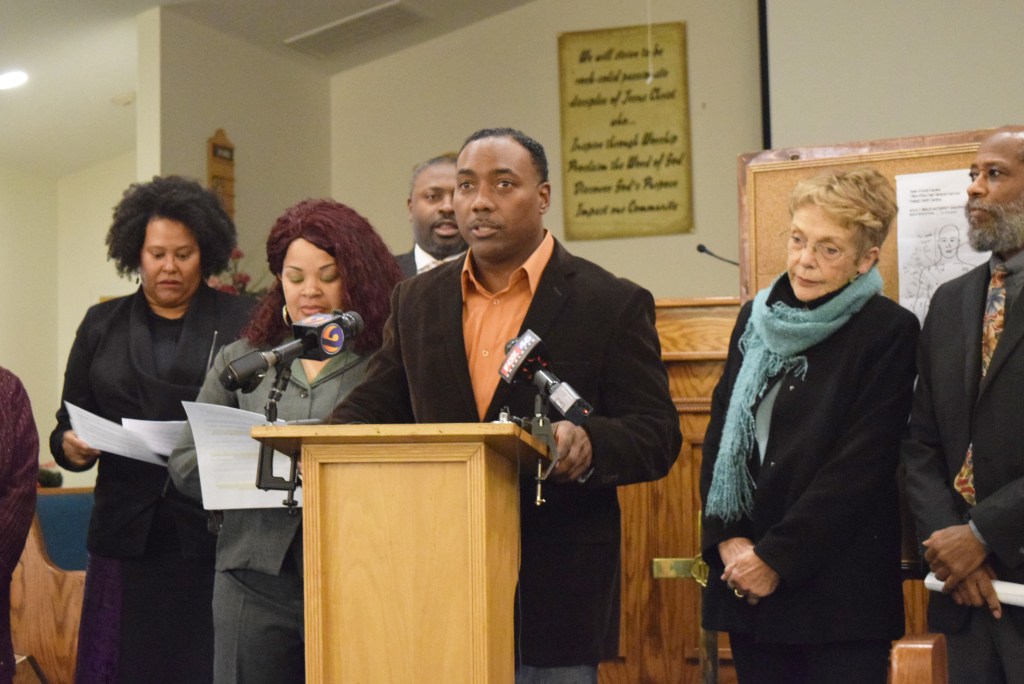 SALISBURY — For local clergy and community leaders, the release of an autopsy report in the death of Ferguson Laurent has raised more questions than the answers it provided.

Laurent, 22, was shot in November when members of the Salisbury Police Department’s Special Response Team went to 625 E. Lafayette St. to serve a no-knock warrant. An autopsy report obtained Jan. 11 showed that Laurent suffered 10 bullet wounds and had no drugs or alcohol in his system.

A group of pastors who spoke out after the Nov. 3 shooting held a press conference Thursday morning to ask police and city officials for “truth, transparency and trust.”

Pastor Patrick Jones, senior pastor at New Zion Baptist Church on Dunn’s Mountain Road, said the group has been pleased with the Police Department’s pledge to wear body cameras in future operations. But the pastors still feel like more needs to be done.

“We have critical questions and major concerns regarding the following since the last news conference,” Jones said.

Jones and others questioned whether the number of shots fired by police was necessary. They expressed concern that the number of  shots noted in the autopsy differed from the number given in initial police reports.

The pastors said that shortly after the shooting, they met with Police Chief Jerry Stokes and were told that Laurent had been shot two to three times by Karl Boehm, a member of the Special Response Team.

Bradley Taylor, senior pastor of Outreach Christian Ministries, said the group also is concerned by the Police Department’s execution of the no-knock warrant. Taylor said the use of “paramilitary tactics into a residence located in the heart of a heavily populated area” raises questions.

“The number of shots that killed Mr. Laurent are disturbing, considering the density of the neighboring residences,” he said.

Taylor questioned whether the nature of the search warrant itself necessitated such a use of force. Police have said the warrant was for a search of the home, not for Laurent himself, and Taylor said the search did not produce the quantity of contraband expected.

Taylor called for specific details and increased transparency between the Police Department and the community.

“We are at the point now where we want details to these questions and concerns we have raised today,” Taylor said, “… I think it’s time that the community gets its answers.”

The pastors also called into question police reports that Laurent fired at least one shot at police. They said they have doubts that Boehm was the only officer to return fire.

Latasha Wilks, associate minister at Mount Zion Missionary Baptist Church, said she wants to know what concrete evidence police had that led them to believe the occupants of 625 E. Lafayette St. were “violently dangerous” other than the word of an informant.

Al Heggins, founder of the Human Praxis Institute, called for city officials to stop deflecting and to “come from behind the rumor control postings on your website.”

She and local pastors called for the city to take ownership of its role in what they termed a “public breach of trust.” They also called for the City Council to place the suspension of no-knock warrants on its agenda for a vote and for city officials to sit down with the black community for a collaborative planning process to address underlying issues and to rebuild trust.

The shooting is under investigation by the State Bureau of Investigation. When asked why the group didn’t wait until the SBI report is complete, Wilks said the pastors want specific answers about “information that was put in front of us.”

“We were told two or three (shots) in a meeting. This is not justifiable,” she said. “We feel like, to be honest, we were lied to. … Two and 10 is a big difference.”

Wilks said the group has confidence in the SBI investigation and is willing to wait for the SBI’s report.

“We just want the chief to be open and honest and take the responsibility of what was given in the beginning as opposed to now,” Jones said.

City officials have said they are waiting for the SBI report before making further comment.

“We have stated since Nov. 4, that once we provided the initial, preliminary information, that we would have no further comment on this incident until the SBI concluded its investigation of this officer-involved shooting. It would be highly inappropriate for the Salisbury Police Department or the City of Salisbury to comment on an on-going investigation, particularly an investigation this important to our community,” City Public Information Officer Linda McElroy said in a press release.

The city addressed several points in the press release, including clarifying that there were two other individuals in the East Lafayette Street home when Laurent was shot. The one known eyewitness was interviewed. The release also addressed initial reports of two shots.

“Initial reports on the day of the shooting were that Mr. Laurent was shot two times by Officer Boehm. After further investigation on the night of the shooting, it was determined that the initial reports on the number of shots were inconclusive. The true number of shots would be provided in the SBI report and the autopsy. This information was shared with on the City’s Rumor Control web page on the evening of Nov. 3 and with members of the public,” McElroy said.

“While I understand the citizens’ need to know all the details, because I and Council desire the same. However, we must allow the SBI investigation to be completed. I ask all of our citizens to exercise patience with the ultimate goal of a comprehensive and complete investigation by the SBI,” she said.

Experts find no DNA of man accused of murdering…