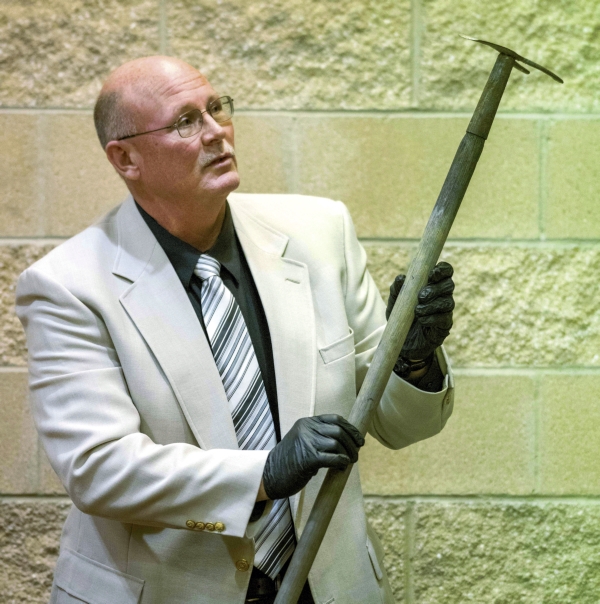 Rowan County Sheriff Detective Ron Mesimer presents to the jury a potato hoe that was collected from the crime scene. Many items of physical evidence were introduced in court Wednesday morning at the Rowan County Courthouse in the murder trial of Jeff Steen. Steen is a accused of killing his 87-year-old grandfather, J.D. Furr. JON C. LAKEY / SALISBURY POST

SALISBURY — DNA found on a gardening tool used to bludgeon J.D. Furr to death was not conclusively found to contain the DNA of Jeff Steen, the grandson accused of killing him. But experts said that doesn’t mean Steen didn’t touch the murder weapon.

Steen, 43, is on trial for the murder of the 87-year-old man and the attempted murder of his mother, Sandra Steen. Jurors heard from Rowan County Sheriff’s investigator Ron Mesimer, who collected the evidence and video-recorded the scene.

Rowan District Attorney Brandy Cook also took Mesimer through the evidence he collected at the scene, which included cheek swabs of both Sandra and Jeff Steen as well as a set of keys that belonged to Sandra Steen and a pocketknife and pistol that were found in Furr’s pocket.

The evidence had been sent to the SBI crime lab for testing. According to Mesimer, the lab tests only 10 items in each case. Investigators sent some evidence to a crime lab in Virginia for testing.

Jeff Steen is accused of beating his grandfather to death with a potato hoe and choking his mother into unconsciousness. She would later recount to investigators how, when she came to, her son was standing over her. The gardening tool, which could be seen in the video, was found lying next to Furr’s body. His empty wallet was also lying beside him.

Much of the Wednesday afternoon testimony focused on explaining the intricacies of DNA and the analysis of the items seized at the crime scene.

SBI agents conducted forensic tests of swabs from the potato hoe, from a wall near where Furr’s body was found that had blood splatters as well as cheek swabs from Sandra Steen’s ex-husband, Billy Steen, and two others.

The DNA profile of the tool matched only Furr, likely because he was the primary person who touched the potato hoe. Experts testified that any epithelial DNA or skill cells of someone who may have touched the tool once may not be there even if that person actually touched it.

According to Michelle Hannon of the SBI crime lab, weather conditions  could break down DNA.

Rowan detectives also collected scrapings from underneath Sandra Steen’s fingernails. Those scrapings, which also contained a hair, were a match for Sandra Steen.

Rowan District Attorney Brandy Cook asked if Sandra Steen crawling on the ground could free any DNA from underneath her fingernails. Hannon said it could.

Sandra Steen told investigators she crawled throughout the night in 31-degree weather trying to make it to the house while in and out of consciousness.

Defense attorney Darrin Jordan inquired about the purpose of analyzing fingernail scrapings. Hannon said it was to see if there was a transfer of DNA.

Rowan investigators said Sandra Steen scratched her attacker. Jeff Steen was found with several scratches on his arm. He told investigators they were from his mother the morning he found her and later said he was injured at work.

An agent testified that any DNA from nail scrapings usually belongs to the person from whom it was collected. A transfer of DNA from someone else would likely be present if there was a chunk of material found underneath the nail.

Experts didn’t rule out that Jeff Steen had never touched the murder weapon.

by Rebecca Rider rebecca.rider@salisburypost.com SALISBURY — The folks at Appleseed are optimistic as the non-profit wraps up its second major... read more