Ex-girlfriend of Jeff Steen: They argued about money often 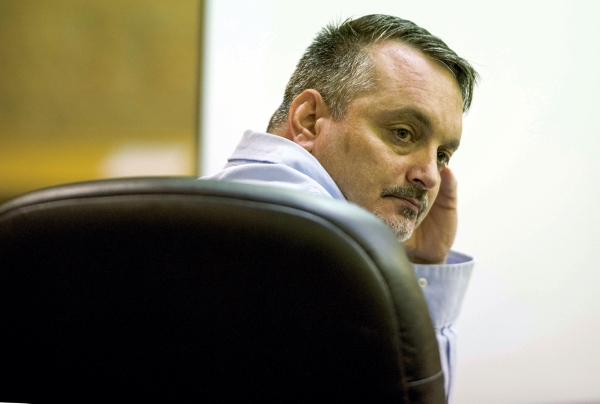 JON C. LAKEY / SALISBURY POST Defendant Jeff Steen turns to look at the gallery during Wednesday morning's court proceedings. Steen is a accused of killing his 87-year-old grandfather J.D. Furr and attempting to kill his mother Sandra Steen in November 2013.

SALISBURY — Jeff Steen had money problems, at least that’s what prosecutors are trying to establish as a motive in the murder of his 87-year-old grandfather, J.D. Furr.

Steen, 43, is facing prison time, if convicted of the beating death of Furr and the attempted murder of his mother, Sandra Steen, now 65.

Much of the day’s testimony came from Adrienne Beaver Eller, the ex-girlfriend of Jeff Steen. She read from multiple text messages that she and Steen sent to each other, mostly regarding bills and why he couldn’t help pay them.

Eller said she repeatedly told Jeff Steen he needed to help her. She testified that Steen made at least double what she made and should’ve been able to help her. Instead, Eller said, she was the one paying the majority of the bills and he helped occasionally. She works as an assistant at her father’s Stanly County law firm. She estimated in 2013 she made about $10 an hour. She said Jeff often worked overtime and had a good paying job.

Jurors heard about Jeff Steen’s bills via the many text messages Eller read in court. She dated Steen for nearly three years. The couple lived with her three children and Steen’s then 16-year-old son, Jordan, rent free in a home her parents owned in Albemarle.

Eller believed Steen would pacify her saying he would help pay, but then avoid the topic of bills altogether.

Jeff Steen owed back taxes in the amount of $752.56, child support, had written bad checks, had gotten into a wreck, his son had been in a wreck and he made car payments to his mother on two vehicles.

Jeff Steen admitted to Eller that he could stand to save money by not buying things from online auction sites.

Eller also said she didn’t really know Furr well or Jeff’s mother, Sandra Steen. She said she met both Sandra Steen and J.D. Furr only a handful of times. She said it appeared that Jeff Steen loved both his grandfather and his mother.

“I think he considered him like a father-figure,” Eller said of Jeff Steen’s relationship with his grandfather.

She also said it appeared to her that Jeff Steen loved the farm and found sanctuary in the place.

It was on that family farm where Jeff Steen told Rowan detectives he found his grandfather dead. Furr had been severely beaten with a potato hoe, which was found lying next to him. His empty wallet was also found lying next to him. His mother, Sandra Steen, was found not far from an outbuilding where she sewed and read. Sandra Steen told investigators she was choked from behind. She was also beaten.

Jeff Steen told officials when he went to the farm Nov. 6, 2013, his mother was lying on the ground badly beaten. Sandra Steen at first said she thought Jeff was the one who came up behind her just joking with her, but then her assailant’s grip around her neck tightened.

She even initially told investigators her son couldn’t have tried to kill her.