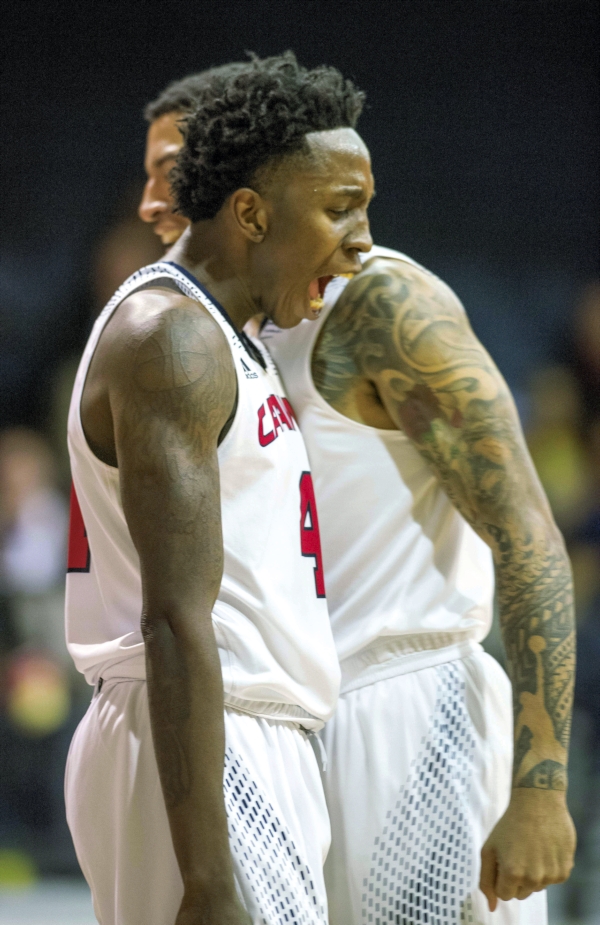 NEWBERRY, S.C.  — Catawba’s men’s basketball team earned its biggest win of the season on Wednesday at Newberry, beating a  red-hot club on the road and overcoming 18 3-pointers by the racehorse Wolves.

In a 100-99 overtime victory, Catawba got solid offensive production from all three of its 1,000-point scorers — K. J. Arrington (20), Jameel Taylor (20) and Jerrin Morrison (18) . When  all three are clicking on the same night the Indians (11-6, 5-6 SAC) have a chance to beat anyone. Taylor made the game-winning shot with six seconds left.

Quaman Burton had a steal and layup with 20 seconds left in overtime to put Newberry (12-5, 7-4 SAC) ahead, 99-98. Taylor sank his clutch basket before Mason Spease’s last-second three-pointer was off the mark.

Morrison had 10 rebounds, while Taylor had nine.

Catawba also benefited from  big games from Rock Brown and Andrew Ingram (10 points). Brown’s 13 points included 3-for-3 shooting on 3-pointers. Brown made the shot that sent the game to overtime after Catawba staged a frenzied rally from a 12-point deficit in the final five minutes of regulation.

The Indians trailed by a dozen with just under five minutes left in regulation. Arrington’s 3-pointer with 4:19 to go started a 9-0 run that pulled Catawba within 88-85 with 2:43 remaining. Evans put Newberry back up by five before Taylor reduced the gap to 90-87 with 1:17 left. Following a turnover, Brown hit  a 3-pointer with 33 seconds to play, and Evans misfired on a jumper with three seconds left to end the regulation 40 minutes in a deadlock at 90.

Catawba shot 55 percent for the game and a sizzling 62.5 percent in the second half. Catawba made 36 2-point field goals, twice as many as Newberry. The Indians, the No. 2 rebounding team in the SAC, smashed Newberry, ranked ninth in the region, on the glass, 50-33.

Catawba made 17 turnovers, but that was still seven fewer than Newberry normally forces.

Newberry head coach Dave Davis is the mentor for Catawba coach Rob Perron, and they’ve worked together at Pfeiffer and Newberry, so it was an emotional win for Perron, who has dropped some tough ones to Davis in recent seasons.

After a stretch of rugged road games, Catawba finally will be at home on Saturday, hosting Tusculum at 4 p.m. The Indians won at Tusculum, 89-86