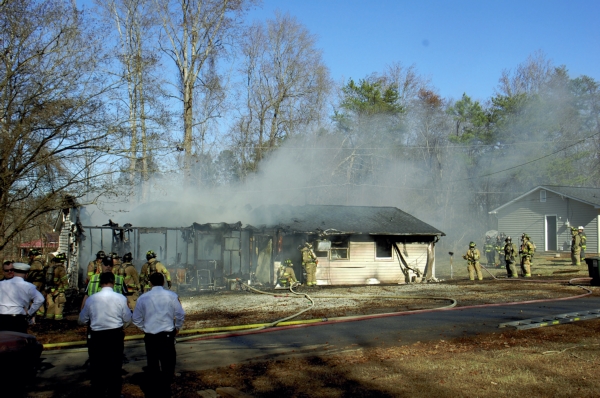 Mark Wineka/Salisbury Post City of Salisbury firefighters tackled a fire early Wednesday afternoon which destroyed a duplex on Matika Drive near the intersection of Gaskey Road.

SALISBURY — A neighbor made sure a woman and her two dogs escaped a fire early Wednesday that destroyed one side of a duplex and heavily damaged the other.

The fire occurred just after noon on Matika Drive near the intersection of Gaskey Road. It’s an area of many mobile homes and duplexes annexed several years ago by the city of Salisbury.

Tracy Angel said she was sitting in her living room scrolling through items on her telephone when Bobby Stayton rapped loudly on her door while shouting, “There’s a fire, there’s a fire.” Angel attached leashes to her dogs, Tinker Bell and Marley, and made it out safely.

Angel said she thought she had smelled smoke before Stayton came to her door, but she didn’t think any more of it.

“All I had was in there,” Angel said. “Now I’m back to nothing again.”

Angel said she didn’t think anyone was in the other duplex, where the fire started. That duplex was destroyed, and hers was heavily damaged and not inhabitable. Chambers Realty manages the property.

Angel said people had been moving stuff into the apartment off and on since December.

“They seemed to be taking their time,” she said.

Stayton, his daughter, Brittani, and Brittani’s husband noticed the fire first and called 911. They are neighbors to the duplex. The Staytons tried to string two garden hoses together and get water on the fire, but it wasn’t enough, Bobby Stayton said.

“I think the water evaporated” before it reached the flames, he said.

Brittani alerted the across-the-street neighbor, Cassie Caudill, about the fire. She was asleep after working a third shift the night before.

“It didn’t take long, Caudill said of the fire. “It went pretty fast.”

Angel said she was waiting for her parents. The American Red Cross also was called to help her.