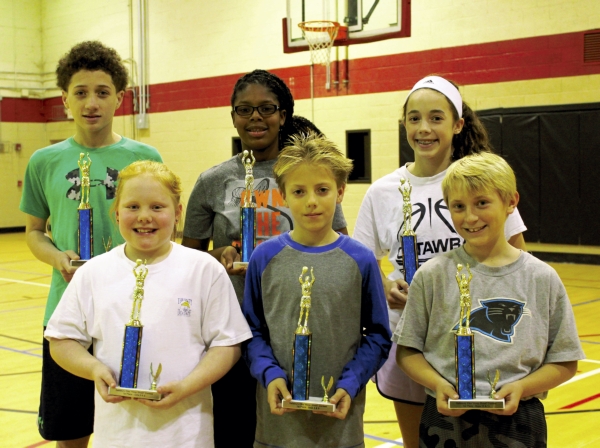 SALISBURY — While sports fans were huddled around a television Sunday afternoon watching the NFL playoffs, others gathered for basketball at Hall Gym for the annual Salisbury Elks Lodge Hoop Shoot.

The competition, a free throw shooting contest for youth, ages 8 to 13, saw the kids try to score as many free throws as possible in 25 attempts.

The winners will advance to district competition on Jan. 28, in Winston Salem.

Liz Tennent, the Hoop Shoot event coordinator, said that she was grateful for the partnership with Salisbury Parks and Recreation and to the event committee.

“I think the advance email registration was a win-win for us and the community,” said Tennent. “I felt things ran very smoothly from start to finish.”

Tennent added that there was a funny interstate twist the day before the event. She received an email from someone who wanted to pre-register and needed directions — from Salisbury, Md.

“I told them we would love to have them here but that’s a long, long way to drive, no matter how much you love basketball,” said Tennent.

Tennent was able to connect the person to an Elks Hoop Shoot closer to home.

Gail Sce has been with the Salisbury Elks for over 12 years. She and Debbie Martin, Lodge 699 secretary, helped with registration.

“We had an incredible turnout of children, parents and volunteers,” said Sce. “I think it was the largest ever for our Salisbury Elks Hoop Shoot contest.”

Committee member and five-year Salisbury Elks member, Kenny Martin, said it was a lot of fun, but there was great competition, too.

“I was really impressed with everyone’s level of skill and form,” said Martin. “We saw a lot of “swishes” today. We also had a double tie-breaker in the boys’ 8-9 group.”

The winners will have to win at district, state and regional events before advancing to national competition in Chicago.