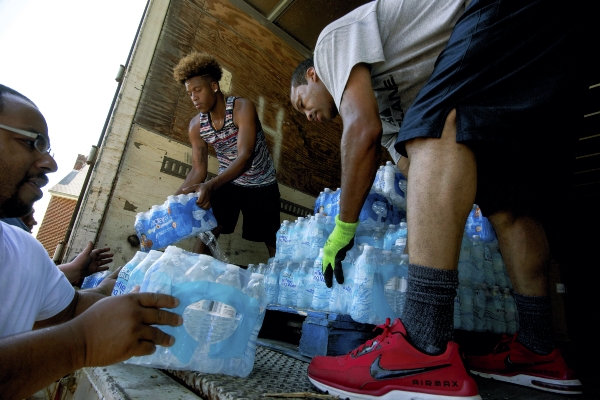 SALISBURY — No amount of money will make the Morgan family feel whole again.

At night, Dukeville resident Renard Morgan puts out enough water for his family to use the next day, said his wife Kenya Morgan. When Kenya wakes up in the morning to make a pot of coffee, she grabs water bottles to fill up the coffee pot. She’s thrown out coffee pots after accidentally using faucet water, out of fear that coal ash ponds nearby have brought cancer-causing compounds to her water well. Cooking requires bottles of water too, Kenya Morgan said.

Washing clothes is one of the few tasks for which the Morgan family uses well water.

Kenya Morgan said she and her husband enjoy gardening, but they haven’t grown a family garden lately out of fear for what’s in the soil and water surrounding their house.

Items in the family’s home have been rendered realtively useless, including a new dishwasher, icemaker and, notably, a water well that cost $10,000.

To provide “peace of mind” and address other concerns, Duke Energy last week announced it would offer families within a predetermined radius of its coal ash ponds, including the Morgans, a $5,000 “goodwill payment.” The offers haven’t yet reached the mailboxes of homes that surround Buck Steam Station, but they will come with a stipulation that those who accept the $5,000 absolve the nation’s largest energy company of groundwater contamination concerns.

Duke Energy has repeatedly claimed and produced scientific studies showing that water wells in Dukeville have not been contaminated by coal ash ponds nearby.

Regardless of the reason for the water concerns, Morgan and others in the Dukeville community say they won’t accept the offer when it comes.

“No amount of money will make a person feel whole again when everything has been stripped away, when our life has changed because of what’s happened,” Morgan said. “My family means more to me than that, and what we have been through is so much more than that.”

She said the offer is “too little, too late,” for her family, which just started receiving bottled water from Duke Energy in September. The company has provided bottled water to other families since Spring 2015.

Bob Gobble, who lives on Dukeville Road, feels similarly about the “goodwill payment.” It’s roughly the same amount he spent for the water well on his property, Gobble said.

Dukeville resident and activist Deborah Graham estimated most people who receive the offer will decline it.

Salisbury attorney Mona Lisa Wallace has not said whether her firm, who represents a large swath of coal ash neighbors, will advise her clients to decline the offer. However, Wallace on Tuesday said her firm only learned about the $5,000 “goodwill payment” through news reports and clients who called her office.

She said it’s unclear exactly what the terms of Duke’s offer might be. Her law firm — Wallace and Graham — has asked Duke Energy for more information about the “goodwill payment,” she said.

The $5,000 offer is the latest in a contamination controversy that’s nearly three years old. Letters from state environmental regulators in early 2015 began appearing in the mailboxes of Dukeville residents. The letters warned that water wasn’t safe to drink or cook with. Later, state regulators changed health screening levels and reversed the prior determination about the safety of well water. Water was now unsafe to drink.

Even later, state regulators reverted to the original recommendation for a limited number of houses.

As lawsuits over water quality near coal ash ponds worked their way through the courts, a state toxicologist — Ken Rudo — accused officials of acting unethically. The long-time state employee was accused of lying under oath by the governor’s chief of staff. In a joint column sent to media outlets across the state, the Department of Health and Human Services and Department of Environmental Quality accused the toxicologist of “questionable and inconsistent scientific conclusions.”

A top health official resigned, in part, because of the way Rudo was treated.

Regardless of the determination from environmental regulators, Dukeville residents continued to avoid using well water for fear of contamination. Duke Energy continued to provide bottled water to residents. However, some families, such as the Morgans, didn’t start receiving deliveries until much later.

Relief for Dukeville residents may come in the form of municipal water lines, but the latest estimates suggest water won’t start flowing until mid- to late-2018.

“By that time, it will have been something like four years that we’ve had to live through this,” Graham said. “It’s aggravating, and $5,000 is peanuts compared to what we’ve been through.”