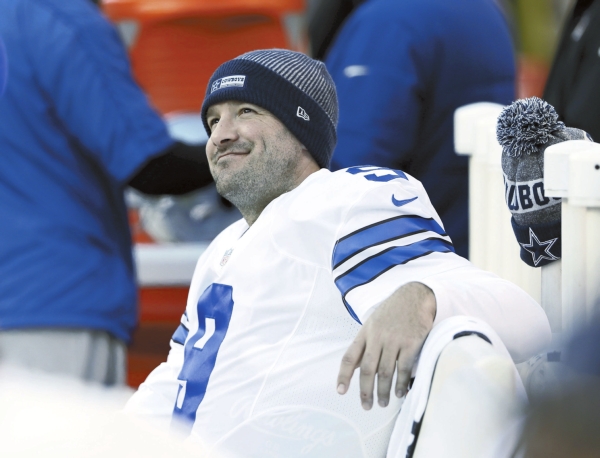 FILE - In this Jan. 1, 2017, file photo, Dallas Cowboys' Tony Romo smiles on the bench during the second half of an NFL football game against the Philadelphia Eagles in Philadelphia. Those closest to Romo on the Cowboys aren’t ready to discuss the future of the Dallas quarterback, probably because they know the likely final answer. After 156 games, 34,183 yards passing and 248 touchdowns, Romo’s career in Dallas appears over after he lost the job he held for 10 years to rookie sensation Dak Prescott following a preseason back injury. The question is, what’s next. (AP Photo/Matt Rourke, File)

FRISCO, Texas (AP) — Those closest to Tony Romo on the Cowboys aren’t ready to discuss the future of the Dallas quarterback, probably because they know the likely final answer.

After 156 games and franchise bests of 34,183 yards passing and 248 touchdowns, Romo’s career in Dallas appears to be over after he lost the job he held for 10 years to rookie sensation Dak Prescott following a preseason back injury.

The question is, what’s next?

“There’s several cards to be played,” owner and general manager Jerry Jones said on his radio show Tuesday. “Don’t think for one minute if you see something written or something said about what and where Romo is going to be relative to our team that there’s any credibility to it.

“There’s only one that can make that decision, and there’s been no decision made.”

Whether it’s a trade or release, Romo figures to have at least some say in where he goes because of his strong relationship with the Jones family and coach Jason Garrett. And logic says it will be a playoff contender needing a quarterback.

Meantime, it’s hard to think about a Romo-less Dallas roster for Garrett, seen frequently at sporting events with Romo during the offseason in recent years. He didn’t want to discuss the specifics of the 36-year-old’s future.

“We certainly want the best for him, whether he is here or whether he is somewhere else,” Garrett said Monday. “He has been such an inspirational guy to me and everybody who has been fortunate enough to be around him. So good things will happen for Tony Romo. A lot of things will be discussed over the next few weeks.”

Tight end Jason Witten came into the NFL with Romo in 2003 and is his best friend on the team. Romo and Witten didn’t appear in the locker room a day after a 34-31 playoff loss to Green Bay. But immediately after the Packers won, Witten was asked whether his friend had played his final game for the Cowboys and he recalled the only time Romo spoke publicly all season, when he read a five-minute statement that conceded the job to Prescott and didn’t take questions.

“I’m sure in the next few weeks we’ll have a time to talk,” Witten said. “But I’m proud of him and how he handled that. Going back to when he had his press conference and the way he was able to kind of take the lead and eliminate the distraction for our football team. That wasn’t easy to do. I think we’re all better because of that.”

After declining to discuss the Prescott-Romo decision in detail all season, Garrett finally opened up when the season was over.

Garrett, who was Romo’s offensive coordinator for 3 1/2 seasons before taking over as head coach, said the difficulty was realizing how successful Romo was in the previous two seasons when he wasn’t out with a twice-broken collarbone in 2015.

Romo was 16-5 in his final 21 starts, including two playoff games in 2014. But the Cowboys were in the middle of a team-record 11-game winning streak with Prescott when Romo was ready to return after breaking a bone in his back in the third preseason game.

“So when he had his opportunities based on the merits, there’s a compelling argument to be made that that guy should be your quarterback,” Garrett said.

Prescott likely eliminated any lingering doubt by leading the Cowboys back from 18- and 15-point deficits, the latter in the fourth quarter, against the Packers. Dallas tied the score twice in the final 4:08.

Romo made his only appearance in the regular-season finale at Philadelphia when the Cowboys already had home-field advantage locked up in the NFC playoffs. The four-time Pro Bowler led a touchdown drive in his only series.