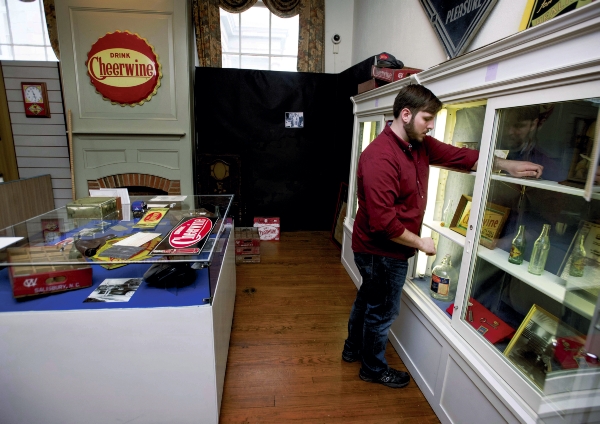 JON C. LAKEY / SALISBURY POST Evin Burleson , exhibit curator, makes some adjustments to one of the several displays of Cheerwine items. The Rowan Museum is working on setting up the newest exhibit.

SALISBURY — Be prepared to see a lot of red.

If you want to be reminded of the indelible impression Cheerwine, the famous Salisbury soft drink, has made over the past century, plan to visit the yearlong Cheerwine exhibit scheduled to open at the Rowan Museum on Jan. 29.

Everything from original bottles to a classic drink machine to photographs of presidents drinking Cheerwine will remind you how the cheery, cherry soft drink is part of our lives. This year marks the 100th anniversary of Cheerwine, and Rowan Museum and the company are combining to make the exhibit happen.

“This is one of the most challenging displays we’ve had to put up,” said Aaron Kepley, executive director of Rowan Museum Inc. “It has come together very well.”

Curator Evin Burleson has been the exhibit’s main designer. The museum at 202 N. Main St. is closed until the official opening from 1 to 4 p.m. Jan. 29 while construction of the exhibit continues.

Much of the museum’s first floor will be dedicated to Cheerwine. The museum even will be selling Cheerwine merchandise. Half of the sales revenue will go to support Rowan Museum programs, as will 50 percent of all the Cheerwine sales from a new drink machine installed at the museum’s back door.

“What are you drinking, Evin?” someone asked Burleson as he walked down the hall Tuesday morning with a can of soda in his hand.

Cheerwine also is making a sizable donation to the museum in support of the exhibit. The company plans a major centennial celebration May 20 in Salisbury, and Kepley anticipates 1,000 people or more will visit the museum that day.

Except for a few items, virtually everything being displayed has come from the company. Much of it represents a remarkable private collection Cheerwine came to own, and it is the first time most of the items have been shared publicly.

Those rare artifacts will make any collector drool, as will all the old Cheerwine metal signs and color advertisements.

Remember the red-and-white Cheerwine zebra? Have you ever sat on a Cheerwine bench or iced down a Cheerwine cooler? Were you a Morgan Shepherd fan, because he drove for the Cheerwine racing team? How many times did you have a Cheerwine with barbecue or drink Cheerwine punch over the holidays?

The soft drink is or has been an ingredient in popsicles, cream bars, Krispy Kreme doughnuts and barbecue sauce, to name a few things.

The Cheerwine name has been on calendars, clocks, bumper stickers, toy trucks, golf balls, trays, grills, blankets, chairs, bottle openers, cups and glasses. All will be on display, as will things such as old cardboard cartons, wooden Cheerwine cases, caps of Cheerwine truck drivers, uniform patches and a 1930 apron from the bottling plant.

Look for a timeline of Cheerwine bottles and packaging from the 1950s to present day. One wall will share photographs of U.S. presidents who drank Cheerwine, including Dwight Eisenhower, George H.W. Bush, Richard Nixon, Bill Clinton and Barack Obama.

Obama drank his Cheerwine at Mast General Store in Boone. Bush cooled down with Cheerwine while playing softball at the Faith Fourth of July activities in 1992. Eisenhower made reference to his Cheerwine during a visit to Salisbury during the Rowan County Bicentennial in 1953.

It’s interesting to see all the slogans Cheerwine has used through the years. Today, the word “Legend” is incorporated in much of the marketing, as in Cheerwine has a legendary taste.

But there were times when the company promoted the soft drink for your health: “It’s Good and Good for You” the advertising used to say, or another tagline was, “For Health and Pleasure.”

Burleson has been doing a lot of personal research into Cheerwine, and he has been fascinated with the old advertising. From 1930, he saw six different slogans over just a couple of months.

“They were trying to find themselves there,” Burleson said.

Other slogans noticeable on the old packaging, drink machines and other marketing items included “Drink Three and See,” “Next Time, Drink Cheerwine,” “On All Occasions, It’s Good Taste,” “It’s Full o’ Good Cheer,” “Smile!” “Deliciously Different,” “Seek the Unique,” “A Thirsty Choice,”  “Refreshing!” and “Now That Would Be Different.”

This is the first time the Rowan Museum will devote a whole year to a temporary exhibit, Kepley said.

L.D. Peeler created Cheerwine in 1917 amid a sugar shortage during World War I. The company has always been in the same family. Cliff Ritchie is Peeler’s great-grandson.

Some of the Cheerwine story will be told with text and photographs.

The exhibit will place a Cheerwine bench in front of a large back window at the museum.  The company is encouraging all visitors to the exhibit to sign the bench.

The Kaye Brown Hirst Garden is outside that back window, and Kepley hopes the bench will be a place where brides, who might be having their wedding receptions upstairs, will pause for pictures.

He also sees the bench as a good place to make recordings of people willing to share some of the memories they associate with Cheerwine.

Try this: It’s good and good for you.