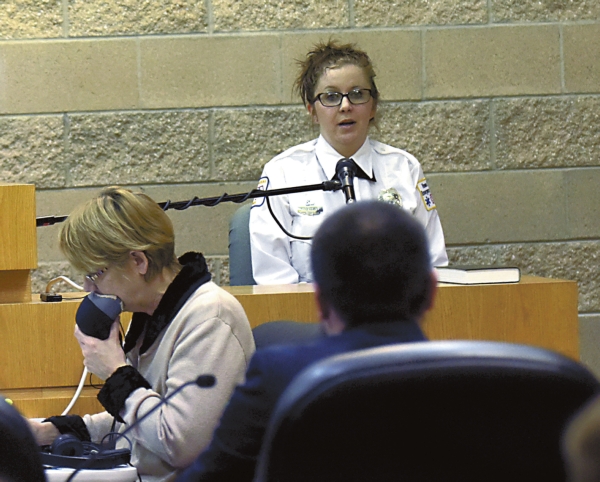 Paramedic Hannah Brown, one of the first EMS responders on the scene, testifies in the trial of Jeff Steen, charged with murder and attempted murder. Photo by Wayne Hinshaw, for the Salisbury Post SALISBURY — When paramedics responded to J.D. Furr’s Richfield home on the morning of Nov. 6, 2013, they weren’t expecting to find a crime scene.

The call came in as “unidentified medical,” Hannah Brown, a Rowan County paramedic, testified in Rowan County Superior Court on Tuesday.  At the time, she and partner David Shute were told there may have been a fall on the River Road farm.

Instead, they found Furr, 87, dead, and daughter Sandra Steen, 65, lying bleeding on the ground — alive, but suffering from a skull fracture and hypothermia.

Steen has since accused her son, Jeff Steen, with the murder of his grandfather and her own attempted murder.

Jeff Steen, 43, has been in the Rowan County Detention Center since his Nov. 21, 2013, arrest. Prosecutors say Furr was bludgeoned to death with a potato hoe, a tool kept near his farmhouse’s back door.

Tuesday Assistant District Attorney Tim Gould and District Attorney Brandy Cook questioned those who arrived first on the scene after the initial 911 call, as well as the doctor who treated Sandra Steen at Carolinas Medical Center in Charlotte.

It was Jeff Steen himself who called 911 that morning at roughly 8:12 a.m. Throughout the investigation, Steen maintained that he came over that morning to do some work on his grandfather’s farm.

The prosecution played recordings of multiple 911 calls in which Jeff Steen can be heard crying and asking for emergency workers to hurry. Telecommunications operators had to ask him several times to calm down and to take deep breaths.

“My mom’s on the ground and she’s bloody,” he said on the call.

He also told operators that Furr was lying on the ground and not moving. When asked to check on his grandfather, Steen began crying and said, “Oh, God” as he approached the body. He told operators Furr appeared stiff and was covered in blood.

The call was dropped several times, and Jeff Steen reconnected. In between, emergency personnel can be heard wondering if an assault occurred at the residence.

It was a speculation that didn’t make it to Brown and Shute. While testifying, Brown said that EMS waits for law enforcement to clear a scene if a crime is suspected, before beginning treatment. But when they pulled up the looping driveway, they just saw Jeff Steen, flagging them down.

While waiting for EMS, Jeff Steen stayed on the phone and told operators that he was going to lie on top of his mom to try and keep her warm.

In the background of the call he can be heard talking to her.

Later, Sandra Steen would accuse her son of the brutal attack, though she initially told detectives she believed her attacker was wearing a ski mask and it could have been more than one person. But she changed her mind after speaking with detectives in late November 2013.

On the witness stand last week, she said she was confused at the time and guessed at what could have happened.

Gould spent Tuesday morning asking Dr. Gaurav Sachdav, who admitted Sandra Steen to CMC NorthEast, whether her traumatic brain injury or narcotic prescriptions could have led to a difficulty recalling events. Sachdav said it was possible.

Jeff Steen was at the house the night of the attack to help Furr repair a ceiling fan, and the state has been building the case that money problems and a wish to inherit Furr’s farm are at the root of his alleged crimes.

When paramedics arrived at the farm that morning, Brown went to tend to Sandra Steen, and Shute went to Furr. Shute said Furr was “pulseless” and he determined death in less than a minute. Brown said she quickly determined that Sandra Steen’s injuries “did not come from a fall,” and began to feel uneasy.

At the time she and Shute were the only outsiders on the scene — though a first responder and law enforcement arrived a short time later.

Sandra Steen was suffering from a skull fracture, several broken ribs and a collapsed lung, among other injuries.

“There was a lot of bleeding,” Brown recalled, “but it had had time to dry — you know, it was all matted in her hair.”

Brown tried to talk to Sandra Steen, and said the woman tried to respond. When Brown squeezed her hand, Sandra tried to squeeze back. Slowly, she told Brown that she was cold, that she had pain on her left side and that she had been attacked from behind.

During treatment, Brown said Jeff Steen was “hovering” and trying to answer questions for his mother. He also tried to climb into the back of the ambulance with her. Brown told the court that she found his behavior “somewhat concerning.” She even asked a first responder, Bradley Nations, if he was armed — a question that Shute corroborated.

Jeff Steen was not allowed to ride in the ambulance as it whisked his mother away to Stanly Regional Medical Center.

But defense attorney Darrin Jordan chastised Brown for not including her unease about Jeff Steen’s behavior or her question of a firearm in her official statement to the Sheriff’s Office.

Jordan asked if it was unusual for family members to be concerned at the scene, or to try to answer for a patient. Brown said that it wasn’t, but when asked by paramedics, most people back off. Jordan again confirmed that Brown didn’t include any of this in her statement. Brown confirmed she hadn’t.

“You have a different perspective than everyone because you were the second people on the scene,” Jordan said.

But none of Brown’s concerns were mentioned in the report, or brought up in the multiple interviews Brown had with law enforcement. Under questioning, Brown also said that she and Sandra Steen had grown close after the incident; Sandra visited the EMS station to thank Brown and Shute, and even gave Brown a baby shower gift.

The court also heard testimony from Deputy Joel Lentz, who also responded that November morning, and Detective Ron Meismer, who collected evidence and documented the scene.

Meismer began walking through photos of the scene, including pictures of the body and surrounding area, when court was dismissed for the day. The trial will resume today at 9:30 a.m. in district courtroom 2.

By Amanda Raymond amanda.raymond@salisburypost.com SALISBURY – Sandra Steen, survivor of a vicious attack in 2013 that left her battered and... read more