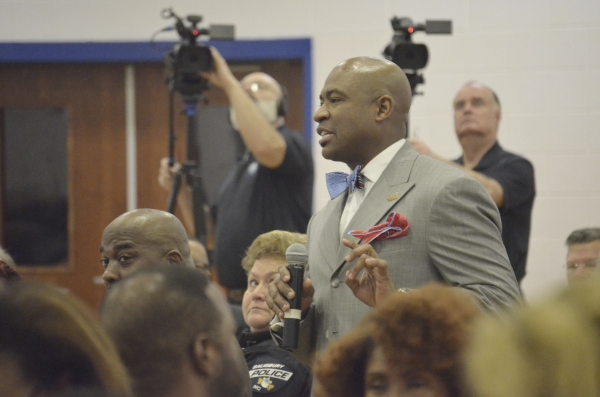 Dr. Kenston Griffin, CEO of Deam Builders Inc., was the guest speaker for the 31st annual Martin Luther King Jr. breakfast held at the Salisbury Y. Griffin began speaking from the back of the room amongst the audience and made his way toward the front. Shavonne Walker/Salisbury Post

SALISBURY — On a day when some see Martin Luther King Jr. Day as a holiday off from work or school, Dr. Kenston Griffin, reminded those assembled at the Hurley Family YMCA for a breakfast celebrating the life of Dr. King that everyone must tap into their hidden treasures.

Griffin, CEO of Dream Builders Communication Inc., is one of the nation’s most sought-after keynote speakers. He is a best-selling author as well as a trainer and coach. The Statesville native is a graduate of Livingstone College and the University of South Carolina.

The annual breakfast is sponsored and organized by the Human Relations Council. This year’s theme was “A time for hope, justice, peace.” The event is in its 31st year.

“It becomes a point when we must learn to live together as brothers or perish together as fools, at least that’s what Dr. King said,” Griffin said.

“He said we’re not the makers of history but we are made by history,” Griffin said quoting Dr. King.

“I didn’t come here to entertain you. I came here for us to do something different,” Griffin declared.

He added that “if we don’t do something different, we are going to get the same results.”

Griffin said it’s time that people stop coming together “eating and greeting and not doing and saying.”

“If we are really going to transition into 2017, what are we going to do?” he asked.

Griffin encouraged note taking and gave the audience five tips to help them tap into their hidden treasures.

• Think before you speak

• Watch the company we keep

• What type of attitude do you have?

• Tap into your hidden treasures

Griffin took a moment to thank his sixth-grade teacher Alfreda Cowan, whom he asked to stand as he acknowledged her role in his success.

“Jesus Christ saved my life, but Mrs. Alfreda Cowan, you changed my life,” he said.

He said he had a friend, Chad Cook, who was pretty bright and good at math. Griffin didn’t admit to cheating, but said his eyes wandered a lot.

He noticed that Mrs. Cowan would put her hand on his shoulder and mutter a “hmm” and other vocal utterances under her breath, but later in life he realized Cowan was praying for him.

Griffin also used the time he was on stage to talk about fear and conquering goals.

He asked the audience what they let fear take from them, whether it was a promotion or other goal.

“Your fear is nothing more than False Evidence Appearing Real,” he said.

“If you’re really going to walk into your greatness, you’ve got to begin inspect what you expect,” Griffin said.

Dr. King said a few things that Griffin said he felt are paramount in the 2017 starting with “our lives begin to end the day we become silent about things that matter.”

He encouraged those in the room to spread the message of what was said at the breakfast to those who were not there.

During the event, the audience was treated to a dramatic presentation by the Triple Threat Dance & Charm. The girls of the Salisbury-based studio performed to the song “Glory” featured in the popular movie, Selma.

Founder Krystal Stukes, who, along with assistant instructor Ebony Stockton, wanted a way to show the youth how history repeats itself. The group, made up of 12 girls, ages seven to 14, shared a powerful message through dance about violence that plagued not only cities across the nation, but right here in Salisbury.

The front of their shirts bore the words “Justice For All Just Ain’t Specific Enough,” which are lyrics to the popular song and offered a deeper meaning to the injustice faced by many.

Instructors let the dancers listen to sermons and speeches by Dr. Martin Luther King Jr., “so they would know what they were dancing for,” Stukes said.

She said they weren’t dancing just for their ancestors, but for the current generation.

Also offered during the event were prayers of peace, restoration and hope delivered by the Rev. Tajuan Kyles, the Rev. Anthony Smith and the Rev. Felix Del Rosario.

Kyles, an associate pastor at Mount Calvary AME Zion Church, thanked God for Martin Luther King who said, “true peace is not the absence of tension, but the presence of justice.”

She remarked how King talked about “the need for us to develop a world perspective so that we may have peace in the earth.”

“May your spirit energize us to step in the path of restoration. Give us courage, oh God, to no longer be afraid to be quiet to sit in the corner of indifference. But God, when we step into the legacy of your slain brother Dr. Martin Luther King Jr., in the gap God, raising the banner of justice in the midst of inequity, in the midst of white supremacy, in the midst of racial inequity that abound across all social categories,” said Smith, co-pastor of Mission House.

By Susan Shinn Turner Smart Start Rowan When listening to Seuss, you can’t be sad. You can’t be mad, you... read more