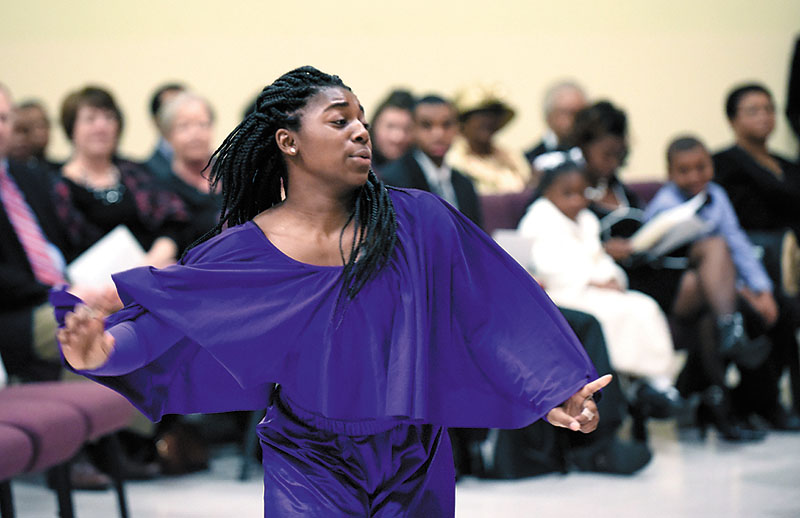 SALISBURY — Even Dr. Martin Luther King Jr. had to face fears and in the 48 years since his April 1968 assassination, this generation is still facing new fears. But, as the Rev. Dr. Leonzo Lynch reminded every listener inside Mount Zion Missionary Baptist Church on Sunday, “faith is strong enough to fight back any fear in your life.”

Leonzo Lynch united storytelling with biblical principles, historical events with a number of life lessons applicable to both the “civil rights generation” and the “Millennial generation.”

He spoke about faith in the midst of fear, joking that faith was one of those good church words that “some of us hope if we speak of it often, folks will think we have some.”

“We celebrate today the life of Dr. Martin Luther King Jr. and other unnamed heroes. The civil rights movement was not just about color, it was about humanity,” he said.

He said when Dr. King died, he was trying to reconnect the gospel of Jesus Christ to social action.

“Fear will get everybody at sometime,” Lynch said to the crowd.

“If we are going to strengthen our community, we have to call a truce between the generations,” Lynch said.

He encouraged the older generation to teach the youth of today about their history.

“You are living history,” he said of the older generation.

He also suggested they not just talk at the youth, but listen.

“What if we decided to reclaim our lost generation of children? What if they decided to stop killing? What if we put church politics out and put saving souls in?” Lynch proposed to the audience.

Lynch also thanked those in attendance for their community service and the sacrifices that were made. This year’s humanitarian honorees were: JC Price Legion Post Adjutant Abe Daniels, East Spencer Alderman and community leader Otis Gibson, the members of Families and Communities Together (F.A.C.T.), and Julian Simmon and his wife the Rev. Debra “Dee” Ellison. All of the honorees were nominated by the community.

The program was created in the late 1970s by Samuel R. Johnson Jr., pastor of Mount Zion Missionary Baptist until his 1991 death. He worked toward equality as well as political, social, economic and religious freedoms and opportunities for others in the community.

This year’s honorees were:

Daniels is a past Legion Post commander and currently serves as adjutant. He served in both the U.S. Army and U.S. Air Force for 21 years, retiring as a master sergeant. He has aided in the administration of different Legion projects and events. Daniels has taken the perception of the Legion from club atmosphere to a place that hosts a number of patriotic and community events. He’s also played Santa for Christmas parties and given gifts to deserving children.

Gibson is a graduate of Winston-Salem State University, a former educator and education advocate. He taught for nearly 40 years. He assisted in raising over $30,000 for East Spencer summer camp programs, helped the town secure $600,000 in grant funds for the rehabilitation of Royal Giants Park. He has served on the town board for four years and has served as mayor pro tem. His favorite quote is “You can talk about change or just go ahead and make that change.”

• Families and Communities Together (F.A.C.T.)

The organization was founded in 2012 by then pastor of Soldiers Memorial AME Zion Church, the Rev. Dr. Grant Harrison, the Rev. Mary Hardin, who is an associate minister at Soldiers Memorial; the Rev. Carolyn Bratton, pastor of Moore’s Chapel AME Zion Church as well as Shirley Holt, Albert Neely, James Parks and Larry Jones. The organization was developed as an outreach ministry to address the needs of the residents of Zion Hills Apartments and the Salisbury community. Those in the community have benefited from parenting classes, GED and continuing education, computer classes, health fairs, boys mentoring, school lunch programs and other camps and workshops.

Both Holt and Hardin accepted the award on behalf of the organization.

Ellison is pastor of At the Cross Ministries in Salisbury. She holds two masters degrees in religion and organizational management. The couple together have three children. Ellison has been an executive coach, consultant and trainer for various organizations. She is currently an executive management consultant at Diversity Council of the Carolinas. Simmon serves in numerous capacities at the church, including deacon, with the music ministry and food pantry.

“This service has always been a gift to the community. It was started by my predecessor and continues not only the legacy of Dr. King, but focuses on the legacy of people right here,” said Dr. Nilous Avery, pastor Mount Zion Missionary Baptist Church.

He said there’s a lot of good things going on in the community and this awards ceremony is a way to highlight those in the community who are not normally recognized, but who have an impact.