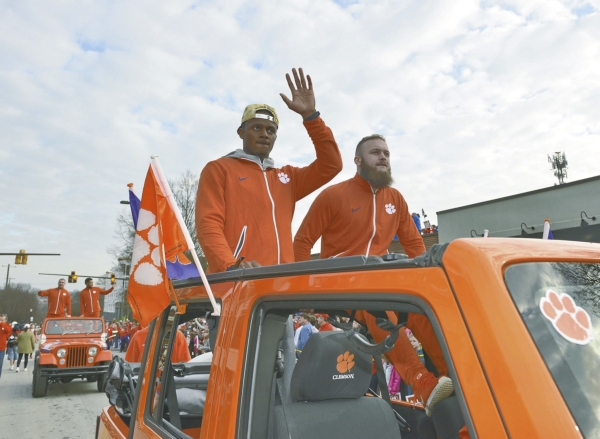 CLEMSON, S.C. (AP) — Around 70,000 smiling, cheering football fans turned out for the biggest party Clemson coach Dabo Swinney has thrown yet at Death Valley to celebrate the school’s first national championship in 35 years.

Last year, more than 30,000 people showed up for Swinney’s pizza party when Clemson was picked for its first College Football Playoff berth after the 2015 season. This gathering topped that, with all but the highest rows filled at the 80,000-seat Memorial Stadium.

Swinney closed the 90-minute ceremony, thanking all who supported and believed in him since his rise from interim coach to national champion. His team won the title with a 35-31 victory over defending national champ Alabama last Monday night when Deshaun Watson connected with Hunter Renfrow on a 2-yard TD pass with one second left.

Swinney recalled telling his players before heading to Tampa, Florida, that Clemson’s only other national title team in 1981 “has been awful lonely up on that stadium for a long time. And this team is the one that’s going to join them.”

Watson told the crowd these three years — the junior is giving up his final season for the NFL draft — have been the best experience of his life.

“It’s a blessing to let the world know what Clemson is all about,” said Watson, who waved as he got a final standing ovation at the stadium.

The celebration began with a parade on College Avenue, where earlier in the week 5,000 fans withstood 30-degree temperatures to watch the Tigers’ victory. This time, Swinney and his family rode in a blue roadster while Clemson stars rode in orange jeeps as people stood three-and-four deep to catch a glimpse.

Players of the past, including many from the 1981 Tigers, were part of the parade and the ceremony at the stadium.

“We put the foundation down, but they put Clemson at the top of the hill,” said former Tigers offense lineman Jeff Bostic, who went on to win three Super Bowls with the Washington Redskins.

Tiger players joyously skipped down the hill toward the field, a twist on their traditional pregame entrance, to the shouts of fans.

Fans began lining up to enter the stadium well before dark, dressed in all sorts of championship orange . There were plenty of Watson’s No. 4 jerseys, plus several No. 13 for national title game hero Hunter Renfrow, the one-time walk-on who caught the game-winning pass.

Erwin Heins, a 1971 electrical engineering graduate at Clemson, experienced his second national title as a Tigers’ fan after the breakthrough 1981 championship.

“I almost did a double back flip when we scored at the end,” said Heins, who drove up Friday from Summerville — about 4 hours away — to make sure he’d get into the stadium for the celebration.

“You can tell we’ve gone in the right direction,” Heins said. “We have the chance to stay at the top for a while.”

The thousands in the stands cheered and booed at appropriate moments as the national title game with Alabama was shown on its video boards. The people started clapping as the Tigers lined up for the game-winning play, then erupted into screams of delight as Watson connected with Renfrow for the decisive score.

Joel Wash, 30, followed Clemson since he was young because his father attended the university. Wash drove 2 hours north from Saluda with 2-year-old son Garner to honor the Tigers.

“This was the only place we were going to be today,” Wash said.

Swinney said too many people saw last year’s season when the Tigers were runner-up to Alabama in Arizona and thought a similar outcome would take place this time, too. He said he told his players that they controlled how their story would end.

“What an ending they wrote Monday night,” he said.

By Will Graves AP Sports Writer The oldest defensive starter in the NFL is also among its earliest risers. While... read more