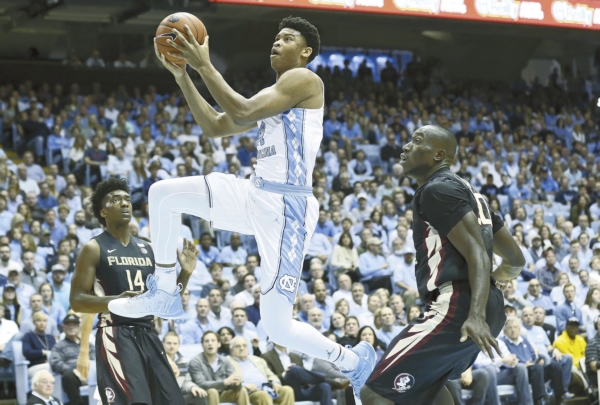 CHAPEL HILL (AP) — North Carolina kept shifting in and out of small lineups, driving to the rim and heading to the boards on every shot.

Being down a big man and facing a highly ranked opponent with more size didn’t deter the 11th-ranked Tar Heels, either.

Joel Berry II scored 26 points and UNC snapped No. 9 Florida State’s school-record win streak with a 96-83 victory Saturday, playing with an aggressive edge they needed to hold off the Seminoles before finally pulling away late.

“We wanted to win a game like this,” Berry said.

The Tar Heels had to do it a bit differently, too. Sophomore reserve Luke Maye played a major role with a career-high 15 rebounds as fouls mounted on Hicks and Kennedy Meeks inside.

At one point during the first half, UNC had a five-wing lineup that left the 6-foot-6, 211-pound Pinson to wrestle with 7-1, 304-pound center Michael Ojo — Pinson ended up on the floor at least once — in a combination that coach Roy Williams said was probably the first time he has ever gone without a true 5-man.

But the Tar Heels finished with a 56-34 rebounding advantage with 21 offensive boards, helping them to 25 second-chance points in a rebounding effort FSU coach Leonard Hamilton described as “relentless.” That fit right into an attacking mindset that got the Tar Heels to the line 37 times.

“They did a much better job of sticking to who they are and playing through themselves and executing their game plan better than we did,” Hamilton said. “They really, really showed up big on the boards. And we had very little resistance.”

Florida State: The Seminoles finally lost in the fourth game of a stretch of six straight against ranked opponents, though they played right with the Tar Heels to prove their strong league start is no fluke. They had four players score in double figures and shot 46 percent, but their struggles at the foul line — they made just 12 of 26 free throws — were particularly damaging after halftime.

North Carolina: The Tar Heels were without freshman big man Tony Bradley Jr. due to a concussion, and their versatility was a big deal. It was a reminder of how the Tar Heels’ experience gives Williams plenty of options to mix and match lineups, which can help offset injuries, foul trouble or even an off night from a key player in tough games.

Pinson missed the first 16 games due to October foot surgery, but had 12 points and 10 rebounds in his third game back while playing a season-high 24 minutes. He had missed his first seven shots of the season coming into the day, but finally connected with a high-flying second-half dunk as well as a 3-pointer with 2:16 left during UNC’s clinching run.

“We find a way,” Pinson said. “(Assistant coach Steve Robinson) says all the time: Solve the problem. We had a problem the first half — I had to play the 5 — and we just had to go out there and play.”

FSU trailed 50-41 on Berry’s 3-pointer just before the halftime horn, and then fell behind by 11 on the first possession after the break. The Seminoles got as close as three points three times, the last coming with about 6 1/2 minutes left.

“I feel like we stuck in it for most of the game,” sophomore guard Dwayne Bacon said, “but the last five minutes, they just drained us.”