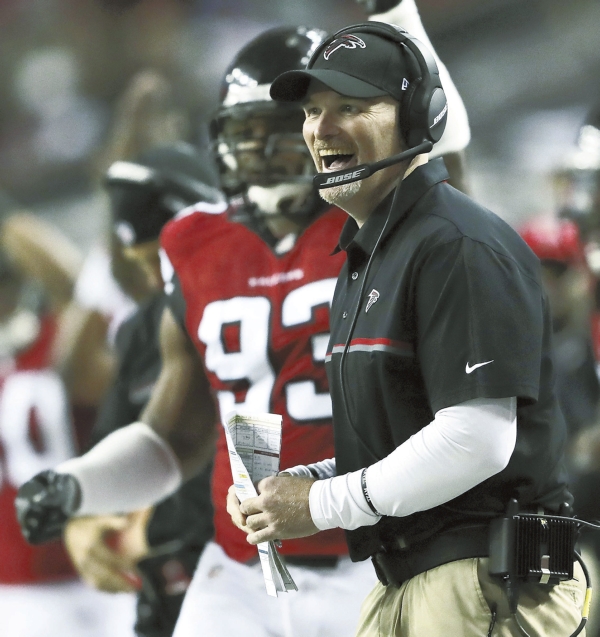 ATLANTA (AP) — Matt Ryan looked very much like an MVP, and the Atlanta Falcons are headed to the NFC championship game.

Ryan threw for 338 yards and three touchdowns, leading the Falcons to a 36-20 victory over the Seattle Seahawks in the divisional round Saturday.

Atlanta will face either the Dallas Cowboys or the Green Bay Packers, who meet Sunday in the NFC’s other divisional game.

After the Seahawks zipped down the field for a touchdown on the opening possession, Atlanta’s young defense largely shut down Russell Wilson & Co. the rest of the way.

Ryan and the high-scoring Falcons took it from there — getting a huge boost from a holding penalty that wiped out an 80-yard punt return by Devin Hester.

Ryan hooked up with Julio Jones on a 7-yard touchdown and Tevin Coleman for a 14-yard score before finishing off the Seahawks with a 3-yard toss to Mohamed Sanu in the corner of the end zone with just under 4 minutes remaining, sparking a raucous chant of “MVP! MVP! MVP!” from a Georgia Dome crowd that stood most of the game, giving the Falcons the sort of home-field advantage that Seattle is used to having at the Link.

“It feels good,” said Ryan, who came in with a 1-4 record in the playoffs. “I think we executed really well across the board. We weren’t perfect by any stretch of the imagination, we made some mistakes. But consistency for the entire day was really, really good. I was proud of the way we played.”

Before a foot injury limited him in the second half, Jones made life miserable for Seattle cornerback Richard Sherman, who got away with an apparent pass interference penalty on Atlanta’s star receiver when the teams met during the regular season, preserving a 26-24 victory for the Seahawks.

Jones was targeted eight times, coming up with six receptions for 67 yards to set a tone that Atlanta would not be intimidated by the Legion of Boom.

But, as usual, Ryan spread the ball around to everyone.

Running back Devonta Freeman slipped out of the backfield to haul in a 53-yard pass, putting a dazzling fake on replacement free safety Steven Terrell right in the middle of the field. The Seahawks sure missed Earl Thomas, out for the season with a broken leg.

In all, eight players caught passes from Ryan.

“He stayed on exactly the same path he had during the regular season,” said second-year Atlanta coach Dan Quinn, who beat the team he worked for previously as defensive coordinator. “He was on it.”

For only the fourth time in their 51-year history, the Falcons (12-5) will be playing for the conference title and a spot in the Super Bowl.

They made their only Super Bowl appearance during the 1998 season, falling to Denver in John Elway’s final game, and lost in the NFC title game during the 2004 and 2012 seasons.

The Seahawks (11-6-1) couldn’t follow up a dominating win over Detroit in the opening round, the game turning dramatically on a holding penalty in the second quarter that wiped out Hester’s return to the Atlanta 7.

Instead of having first-and-goal and a chance to extend a 10-7 lead, Seattle was backed up to its 7. After Thomas Rawls was thrown for a 3-yard loss, Wilson attempted to drop back for a pass.

One problem: rookie right guard Rees Odhiambo, taking over after Germain Ifedi was injured, stepped back onto Wilson’s foot, sending the quarterback tumbling down in the end zone. Ben Garland fell on Wilson for a safety that turned the momentum Atlanta’s way.

Matt Bryant’s 35-yard field goal put the Falcons ahead to stay, and the home team closed out the first half with a 99-yard drive touchdown that was extended by Sanu’s brilliant, one-handed catch for 22 yards with Jeremy Lane grabbing at his arm.

After getting beat on Seattle’s first possession, an Atlanta defense featuring four rookies and a bunch of second-year players limited the Seahawks to a pair of a field goals before giving up a meaningless 31-yard touchdown pass to Doug Baldwin in the closing minutes.

Facing his former team, Hester certainly had quite an impact on special teams.

Even though his longest play was wiped out, he had five kickoff returns for 194 yards, including a 78-yarder.

Hester played for the Falcons in 2014 and ‘15. He signed with the Seahawks just before the playoffs.

Seattle’s tight ends took quite a beating. Brandon Williams went out with a concussion and Luke Willson was evaluated for a possible concussion late in the game.

Also, Seahawks cornerback DeShawn Shead did not return after being helped off the field with a left knee injury early in the second half.

If Green Bay upsets the Cowboys, the NFC championship game would be next weekend at the Georgia Dome, extending the 25-year-old stadium’s tenure one more game.

The Falcons are moving to $1.5 billion Mercedes-Benz Stadium next season.

Another loss for Blue Devils