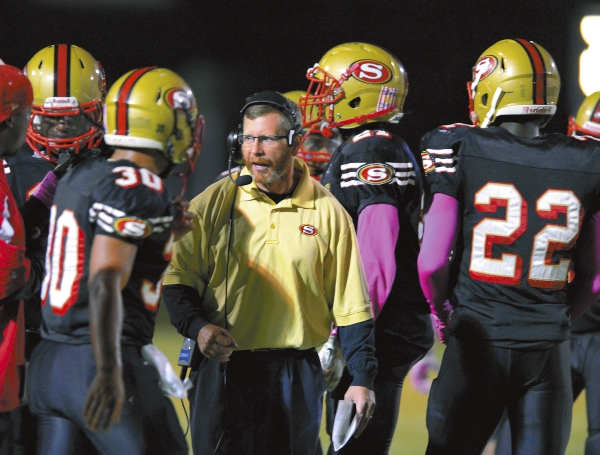 SALISBURY — Ryan Crowder has coached in every Salisbury High varsity and jayvee football game this century.

He’s the only person on the planet who can make that claim, but his streak will end next fall. Head coach for the past four seasons, Crowder turned in his resignation last week. As he put it, he “cashed in his chips.”

“There’s been a lot of change here the last five or six years,” Crowder said. “Now I feel like it’s time for me to make a change. I’m not bitter, I’m grateful. I’ve been blessed. I’ve had a chance to work with a lot of wonderful people at Salisbury High. I got to be part of some great playoff runs. I’ve got great memories.”

As a math teacher, Crowder is fond of numbers, so he’s tracked his football workload the last 17 seasons.  He’s coached in 169 jayvee games and 249 varsity games. He’s coached in 32 playoff games, including five in 2010 when he was the defensive coordinator for head coach Joe Pinyan, and the Hornets shut out Elizabeth City Northeastern for the 2AA state championship.

“Ryan is a good football coach and he’s a good guy, like a brother to me,” said Pinyan, who has been head coach at Carson the past four seasons. “I don’t think there’s been a day since I left Salisbury that we haven’t texted or talked. I had 10 years of pretty good success at Salisbury (100 wins), and Ryan was a huge part of that. The toughest thing about being a head coach is putting a staff together, and I was fortunate to have great assistant coaches.”

Dr. Windsor Eagle, who was Salisbury’s principal  then, got Crowder’s number from somewhere. Crowder had attended job fairs  in North Carolina, so he believes that was the source of a life-changing phone call.

“I’ll never forget it — I was playing golf when Dr. Eagle called me,” Crowder said. “It was a Thursday. He wanted me to drive down for an interview on Friday. I told him I’d be there. I started working that Monday. Football practice was starting, and I hadn’t had a chance to move my furniture or any of my stuff down.  I was sleeping on an air mattress, with a TV plugged into the wall.”

Crowder’s first football duties were as defensive line coach for Raymond Daugherty. That was in 2000. That was an 0-11 team.

Mike Peavey followed Daugherty as head coach and lasted two seasons. Expectations were so low for the Hornets in those  days that  when Peavey’s club went 4-8 in 2002, it was perceived as a minor miracle. He was the Rowan County Coach of the Year.

Pinyan, a long-time assistant at Mooresville High, arrived as the new head coach prior to the 2003 season.

“Dr. Eagle hired a lot of good teachers who were good coaches to assist Joe, and we started building things up,” Crowder said.

In Crowder, Pinyan found someone he could relate to, someone who would talk football 24/7  if someone would listen.

“Ryan is a football version of a gym rat,” Pinyan said. “And he knows his stuff. He’d probably test out as a genius.”

Salisbury didn’t just have one great team in 2010. It had a great program. The 2009 Hornets played in a Western final. The 2011 team made the third round. The 2008 team went unbeaten in the regular season but had to forfeit four on-the-field romps.

But change is inevitable. Eagle retired. Coaches dispersed. Pinyan exited for Carson after an 11-3 season in 2012, and Crowder was elevated to the head job. Salisbury’s records since then have been 2-9, 6-7,  0-11 (three victories were forfeited) and finally, 3-8. That 3-8 included  a pair of two-point losses.

Officially, the record book will show that Crowder was 11-35, but he’s universally regarded as a much better coach than that.

“That non-conference schedule they had — Lake Norman, South Iredell, Southeast Guilford — was tough, and it came about because no 2As wanted to play us,” Pinyan said. “It was difficult for them climbing through that every year to get to the conference games. But Ryan did a good job of holding them together. I know when Carson played Salisbury the last four years, he  usually made it tough for us.”

The biggest obstacle for Crowder was putting a cohesive staff together.

“Kory Fisher was with me all four years, but the guys from the old staff are gone,” Crowder said. “We were starting over, and a lot of our football coaches weren’t on the school staff.”

Crowder isn’t done with coaching football. He’ll be coaching somewhere this fall. Phone calls have poured in since he resigned. He said he’s been contacted by 15 schools in six different counties, including Rowan, already.

He probably won’t be a head coach next year, although he hasn’t ruled that possibility out. He wouldn’t mind returning to a defensive coordinator role. His happiest days were as a coordinator.

“My wife has sat out there in the rain and cold at a lot of games supporting me,” Crowder said. “She’s heard a lot of  people yell at me. But I always figured as long as they paid their six bucks, they could yell whatever they wanted. That’s just part of the job. It never bothered me.”

Crowder has no plans to move his family and he won’t have to.

“I took out a map, and there are 60 schools within comfortable driving distance for me,” Crowder said. “I’m a math teacher, and that makes it easier. Every school needs math teachers, and a lot of them can use a football coach. I’ll go anywhere where they’re as passionate about football as I am.”

Crowder plans to continue to teach at Salisbury until the end of this school year. He plans to assist with baseball, as he always has, this spring.

“I’ve got a list of the top 10 games I coached in — Thomasville, Shelby, Newton-Conover, West Rowan, Eastern Randolph, and so on,” Crowder said. “I was involved in so many epic games at Salisbury. If I can add one more game to that list in the next 15 years or so, I’ll consider myself lucky.”

Crowder will support the Hornets, no matter where he winds up.

“Unless I’m on the opposite sideline from them, I hope they win them all,” Crowder said.