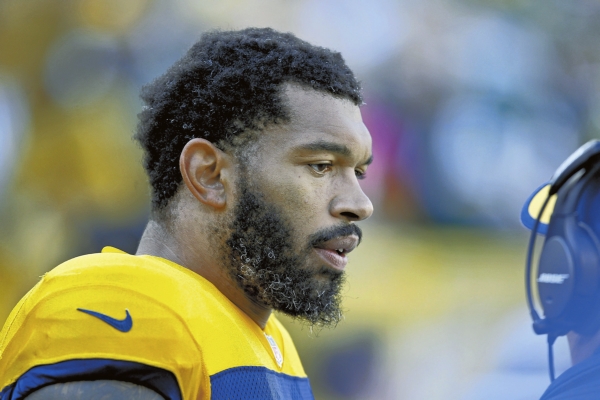 FILE - In this Oct. 18, 2015 file photo, Green Bay Packers outside linebacker Julius Peppers warms up prior to the start of an NFL football game between the Green Bay Packers and San Diego Chargers in Green Bay, Wis. Peppers and Pittsburgh’s James Harrison have combined for 220 sacks and 13 Pro Bowls. They hardly show signs of slowing down. The 36-year-old Peppers will jog onto the field in Dallas hoping to keep Cowboys rookies Dak Prescott and Ezekiel Elliott in check with a spot in the NFC title game on the line. (AP Photo/Matt Ludtke, File) The oldest defensive starter in the NFL is also among its earliest risers.

While his younger teammates spend their Monday mornings recovering from whatever bumps and bruises that might have piled up during Sunday’s game, James Harrison wakes up before dawn and heads down to the Pittsburgh Steelers training facility.

There the 38-year-old outside linebacker embraces the solitude, the oldest starting defensive player in the league intent on maintaining the body that’s spent most of the last 14 seasons creating his own unique brand of chaos in opposing backfields with his combination of power, intelligence and tenacity. None of which, by the way, seems to be abating even though the peers Harrison broke into the league with well over a decade ago have long since retired.

All except Green Bay’s Julius Peppers. Like Harrison, the 36-year-old Peppers is an anomaly, a sage in the locker room and a force on the field for the Packers. Together the two have combined for over 220 sacks and 13 Pro Bowls while remaining as vital as ever.

Harrison’s steadying presence keyed Pittsburgh’s second-half surge that will take them to Kansas City in the divisional round on Sunday night. Earlier in the day Peppers will jog onto the field in Dallas hoping to keep Dallas rookies Dak Prescott and Ezekiel Elliott — both of whom were in elementary school when Peppers won the defensive Rookie of the Year Award in 2002 — in check with a spot in the NFC title game on the line.

Yet to marvel at their longevity does their foresight a disservice. Sticking around this long takes some luck to be sure. It’s also not something they just stumbled into.

“He did the small things young guys don’t look at until they get down the road,” Pittsburgh linebacker Jarvis Jones said. “He started doing those things early. He took that little money he got early and he invested it in himself.”

For proof look no further than Harrison’s Instagram account , where he documents everything from his He Man weight training to his frequent acupuncture visits to the regular notices from the league informing him he’s subject to a random drug test. Tests, Harrison is quick to point out, he always passes.

In some ways, Harrison’s lifestyle is borderline monastic, one he seemed intent on abandoning when he retired in September, 2014 after spending one unremarkable season with the Cincinnati Bengals. It lasted all of 18 days. When the Steelers ran into injury trouble shortly after Harrison’s retirement announcement at the team facility, his familiar No. 92 jersey was back at practice. Nearly three seasons and 15.5 sacks later, he’s still going.

Pittsburgh’s sprint to the AFC North title coincided with franchise’s all-time sack leader return to the starting lineup. The heavy workload hardly seems to be taking a toll. There Harrison was last Sunday, chasing down Miami quarterback Matt Moore to force a fumble late in the first half to cut short a Dolphins drive in Pittsburgh’s 30-12 victory . Harrison finished with 10 tackles in all while being on the field for all but four defensive snaps.

Harrison is nearly as invaluable in the meeting room, where his experience and typical directness have made him a sound board for the 20-something millennials that surround him.

“He’s our book right now for the most of us,” Jones said. “We’ve all got questions. If it’s football situations or things you want to talk about financially or situations you have come up in your life, he’s a great source for all of that.”

It’s not much different for Peppers, who still sits in the front row during meetings and seems to be getting fresher the more he plays. The Packers limited his playing time early in the season in hopes he would be more effective as the season wore on. By all accounts, it’s working. Nearly half of the snaps Peppers played during the regular season (283 of 584) came during Green Bay’s six-game winning streak that helped them chase down Detroit to claim the AFC North title.

Last week against New York, Peppers dragged down Eli Manning in the second quarter to force the Giants to punt from their own end zone. Green Bay ended up with a short field to set up a touchdown pass from Aaron Rodgers to Davante Adams that gave the Packers the lead. They never trailed again .

“Sometimes you’ve got to just dig down deep and be accountable for the role that you have on the team,” Peppers said.

One that Harrison has learned to embrace. At least to a point.

For all the brooding intensity he exudes, his teammates call him one of the funniest people they know. Maybe that’s to combat the seriousness with which Harrison goes about his job. He’ll take time after Pittsburgh’s season ends – whenever that may be – before deciding whether to come back in 2017. Even he’s been surprised by how his body has responded as his playing time increased. He doesn’t need the money and with a base salary of $1.250 million he’s hardly an expensive luxury.

Maybe he retires for good this time around to spend time even more time with his boys. Maybe he comes back. Maybe he finds a way to be both father and big brother at the same time. Just don’t expect him to offer you a chance to work out with him. Sure, his Instagram provides a hint of his regiment. But just a hint. The whole recipe he’s keeping for himself.

“If you try to get up with him, he’s just going to get up even earlier,” Jones said. “By the time you get there to work out with him, he’s already worked out. That’s how he is. That’s his time. We give him space and let him be James.”

Patriots wake up, polish off the Texans