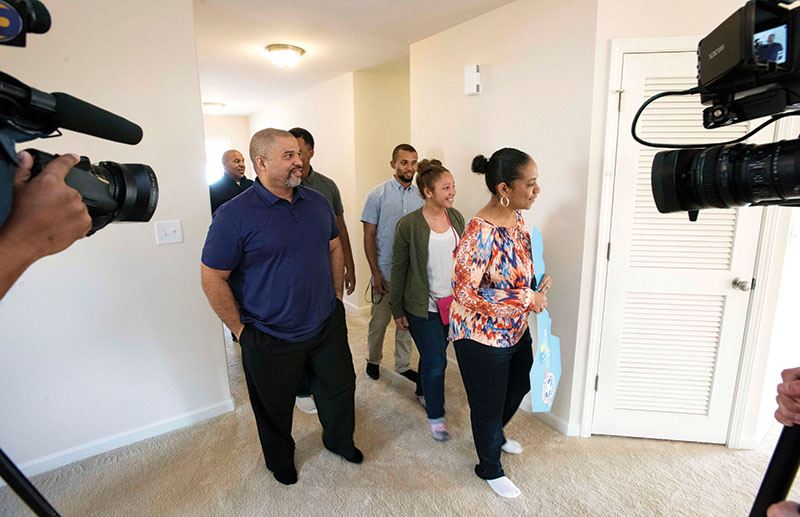 JON C. LAKEY / SALISBURY POST Gary (left) and Shay (right) Mason and their children received a new, mortgage-free home on Friday. Both of the Masons are U.S. Army veterans and applied for and received the home through Operation Homefront. The Masons and their children Martel, Joshua and Jessy are excited about joining the new community and becoming active in it.

SALISBURY — Friday morning was the first look Gary and Shay Mason had of their new home in Salisbury. A good-sized crowd shared the experience.

At the front door, all the Mason family members took off their shoes, along with many reporters and cameramen on hand to document their first reactions to the three-bedroom, two-bathroom house of 1,513 square feet.

It is located off Woodbridge Drive in the new Corbin Acres subdivision.

Thanks to a partnership between Wade Jurney Homes and Homes on the Homefront, these Army veterans were given the key Friday to a newly constructed, mortgage-free house.

“I’m saying a lot,” Shay Morgan said while being interviewed by all the reporters. “But I’m speechless.”

Home on the Homefront, a program of Operation Homefront, began in 2012 and it has provided homes for almost 600 military families. Of those, some 300 have been deeded over to those families, representing $50 million in home value.

“It was a huge team effort,” said Scott Sokoloski, new home studio manager for the Wade Jurney Homes division in Winston-Salem. “It’s been a great experience.”

Sokoloski gave credit to all the tradesmen involved in donating their materials and labor on the project. “I can’t think of a better way to start 2017,” he told the Masons, adding it was a small way for everyone involved in the building of the house to say thank you to the veterans.

In a brief ceremony outside the new home, Brig. Gen. (Retired) John L. Pray Jr., president and chief operating officer of Operation Homefront, said it was a gorgeous day, a beautiful home, an amazing couple, a fabulous family and a great journey with Wade Jurney Homes.

Operation Homefront says its mission is a commitment to building strong, stable and secure military families so they can thrive in the communities they worked hard to protect.

Pray said the same thing to the Masons Friday.

As he handed the Masons the key to their new home, Pray told them, “Hopefully, it will unlock a great future for you.”

Joshua and Jessy have been enrolled at North Rowan High and North Rowan Middle School, respectively.

Gary, a retired Army captain who served 14 years, was medically retired in 2015. He has dealt with post-traumatic stress disorder, along with back and ankle injuries, after serving three stints in the Middle East — 2008 in Iraq and 2010 and 2011 in Afghanistan.

“Then I came home and started the process of healing,” Gary Mason said.

In Afghanistan, he was part of the Special Forces.

Shay Mason served in the Army from 1985-89 as a counter-intelligence agent and Russian linguist.

The Masons and their family have lived in many places around the world — locations such as Fort Benning, Ga.; Fort Lewis, Wash.; Hawaii; Korea; and Japan.

On the homefront, after Gary returned from the Middle East, they lived in Green Belt, Md. and rented a condominium. In 2015, their home’s pipes broke, and the water damage forced them into a hotel in Bethesda until they were connected with Operation Homefront.

The organization has a temporary Village housing program in Gaithersburg, Md., and the Masons applied and were accepted to live there.

They graduated from the Village program by attending a required number of support groups, workshops and financial counseling sessions. The Masons then applied for a home through Homes on the Homefront.

They said it took about 14 months before they heard they had been accepted, but it meant uprooting their lives in Gaithersburg and heading south to Salisbury.

“I didn’t know, logistically, how we would make that transition,” Gary said, describing himself as “a city boy from Washington, D.C.”

People such as Tim Bates, veterans organizations and the Hefner VA Medical Center made them feel at home, Gary said. Even Salisbury Mayor Karen Alexander greeted the Masons on Friday.

“As we were driving down (from Gaithersburg),” Shay Mason said, “the stress was just falling away. … This is kind of our little hideaway. It’s perfect.”

Gary Mason said he has to get used to people waving to him in Salisbury.

“We get that hometown feel,” he said. “You don’t get that in a big city. … We’re really looking forward to just settling in.”

Gary called the new home “a humongous blessing” and said he hoped he and Shay could become involved in Salisbury. His father lives in nearby Lexington.

“We are truly grateful to God,” Shay said. Flowers someone had placed as an arrangement in their new kitchen were the same kind of hydrangea the couple had at their wedding, she noted.

The family stayed in a local hotel before Friday morning’s unveiling. Shay said their furnishings have been shipped and should be delivered to the house Monday. But that wasn’t going to stop the family from moving in right away.

Shay Mason said the family members have sleeping bags to rely on until Monday.

The Masons hope to build on their family production business which focuses on assistance to veterans and military families. Gary aims to graduate in May from American University with a master’s degree in radio, television and video.