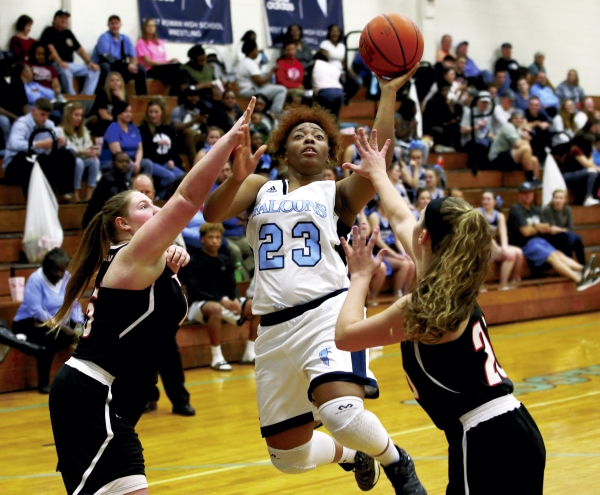 MOUNT ULLA — West Rowan’s girls got right to the point — and the points just kept on coming.

Taylor Poole matched her career best with 13 points, and Myanna Hillie, who hadn’t scored in double figures before this week,  contributed her second straight 12-point game.

It was the most points scored by a West girls team in coach Ashley’s Poole;s four seasons and the most since Shay Steele and Nycieko Dixon spearheaded an 86-59 pummeling of West Iredell in the 2012-13 season when Todd McNeely was guiding the Falcons.

The school record for West  Rowan’s girls has stood since 2002-03. That was a 100-44 romp against Mooresville by a  Toni Wheeler-coached squad.

It’s just about impossible to score 100 now because a running clock is automatic if a 40-point lead is achieved at any point in the second half, but Northwest (2-12, 1-9 SPC) managed to score often enough to keep the margin under 40 on Friday until the final 90 seconds.

The Falcons completed an unusual back-to-back season sweep of NWC. The teams played a makeup game on Wednesday, with the Falcons taking a 67-37 decision.

West scored the first 11 points on Friday, with Taylor Poole making a 3-pointer, Alexander scoring on a fastbreak, Miyanah Pruitt knocking down a short banker, Wilson finishing inside on a nice feed by Myanna Hillie, and then Poole scoring again.

Ashleigh Thomson finally got the Trojans on the board with a free throw four minutes into the game, and NWC, which has a pretty athletic squad,  fought back a bit to trail 24-8 after a quarter.

Wilson had seven buckets by halftime, as the Falcons pushed to a 42-21 lead at the break.

In the  third quarter, Hillie did most of the damage, getting seven of her points in the period. West was in control after three quarters, 61-32.

Then West stayed hot in the fourth quarter. Poole splashed her third 3-pointer of the contest, and Pruitt and Gabby Blabon also made 3-pointers.

Wilson and Alexander scored steadily. Both made field goals in all four quarters.

After the exam break, West returns to action against South Rowan.

Gabriel and Gadson each score 17 points in Cougars’ victory

By David Shaw sports@salisburypost.com GRANITE QUARRY — They’re throwing around a buzzword these days at Carson, where the girls basketball... read more