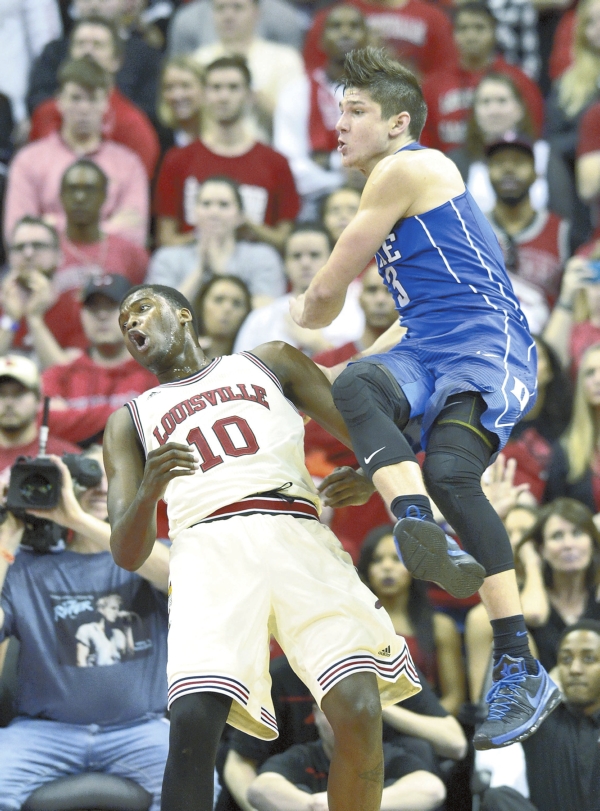 FILE - In this Feb. 20, 2016, file photo, Duke's Grayson Allen (3) charges into Louisville's Jaylen Johnson (10) to receive his fifth foul during the second half of an NCAA college basketball game, in Louisville Ky. For the second time this week, the seventh-ranked Blue Devils and Allen head to another opponent’s home arena when they visit No. 14 Louisville on Saturday to face a hostile crowd with a long memory of how the guard tripped one of Cardinals last season. (AP Photo/Timothy D. Easley, File)

DURHAM (AP) — Duke and Grayson Allen are about to embark on another tough road trip.

For the second time this week, the seventh-ranked Blue Devils and Allen head to another opponent’s home arena when they visit No. 14 Louisville (14-3, 2-2 Atlantic Coast Conference) on Saturday to face a hostile crowd with a long memory of how the guard tripped one of Cardinals last season.

If Tuesday night’s visit to No. 9 Florida State was any indication, Allen and the Blue Devils (14-3, 2-2) surely will be reminded of the trip of the Cardinals’ Ray Spalding last February. Florida State’s Xavier Rathan-Mayes — the second victim of trips by Allen last season — said after the Seminoles’ win over Duke that he’d “been waiting a long time to see him again” and it’s a safe bet that the fans in Louisville feel the same way.

Here’s where things stand heading into Saturday’s matchup with Louisville and what’s next:

IS THIS A PATTERN?

Allen has tripped an opponent three times, so it is fair to say it’s a pattern. Allen received a flagrant foul last Feb. 8 when he tripped Spalding, then drew a reprimand from the ACC — but no suspension — after he tripped Rathan-Mayes in the final seconds of a game 17 days later. All was calm around Allen until Dec. 21, when he flung his leg out to trip Steven Santa Ana of Elon, then punched an empty chair during an outburst on the bench. A day after that episode, Allen was suspended indefinitely — which turned out to be for only one game, a blowout loss at Virginia Tech — and was stripped of his team captaincy.

HOW MUCH BACKLASH IS ALLEN FACING?

Every move Allen makes is under heavy scrutiny with Twitter, cellphone video cameras and DVRs allowing social-media sleuths to post slow-motion clips of any action by the guard that can be perceived as inflammatory. It happened during the Boston College game last Saturday, when clips popped up online showing a BC player setting a screen on Allen and the Duke guard extending his left leg in an apparent attempt to keep his balance — which none of the media in attendance even noticed live. In the next game at Florida State, video circulated online showing Allen appearing to shove a Seminoles assistant while falling into the bench — only to have Allen be absolved when Seminoles assistant Dennis Gates posted a statement on Twitter saying “I know what a dirty play is and I was not the victim of one.”

WILL HE BE OFFICIATED DIFFERENTLY?

That’s a tough question to answer, because his role and playing style have changed over the last month. After he tripped the Elon player, he was benched for the rest of the first half and when he returned after halftime, he seemed more passive than usual — almost tentative. And in the three games he’s played since his suspension ended, he’s become more of a facilitator and less of a threat to score, piling up 23 assists in that span while shooting much less frequently. Perhaps as a result, Allen has been called for fewer fouls since the suspension — just five in his last three games, after being assessed an average of 2.2 in his first 12 games this season.

WHY WAS HIS SUSPENSION SO SHORT?

Coach Mike Krzyzewski said the suspension would last until he “felt good about the entire situation where he is at.” Then in a move made with no fanfare, Allen slipped back into the starting lineup Jan. 4 for the Georgia Tech game. After that game, Krzyzewski defended the decision as “appropriate.” That was also the final game for Krzyzewski before he underwent back surgery that will keep him out for a few weeks. The move spared acting head coach Jeff Capel from facing any questions about when Allen would return or whose decision it would be to bring him back.

IS THIS A NEW POSITION FOR DUKE?

No, it’s not. The Blue Devils have been a lightning-rod program for more than two decades, and Allen is the latest in a long line of Duke players — from Christian Laettner in the early 1990s to J.J. Redick in the mid-2000s — to draw the unrelenting ire of opposing fans. A key difference is, he’s the first to be in that situation in the age of social media.

IS THE SCRUNITY FAIR?

Depends on who you ask. Duke fans and defenders say Allen is a highly emotional player who toes the fine line of aggressive play — Krzyzewski credits Allen’s dive for a loose ball as the turning point in the Blue Devils’ national championship game victory in 2015, even creating a team award specifically to honor it. But critics say his predicament is entirely self-inflicted due to his documented tripping antics. After the Florida State game, Capel said that “the kid has been through enough. He’s brought a lot of it on himself and some of it is crazy, some of the things that has happened that he’s done.”