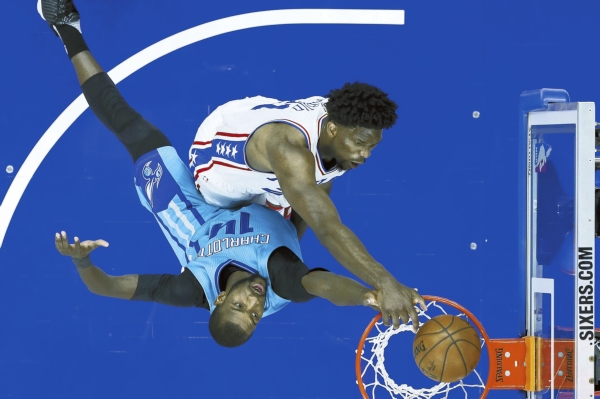 The Sixers are on their first three-game winning streak since they won four straight from Dec. 29, 2013 – Jan. 4, 2014. Led by Embiid, the Sixers have won five of six games overall and are no longer the league laughingstock.

Embiid made six of 12 shots, grabbed eight rebounds and has made basketball fun again in Philadelphia. Embiid waved his arms while fans chanted “Trust the Process!” at him at the free-throw line. Embiid, the rookie center, even heard “MVP!” chants in the final minutes for his role in transforming the Sixers over the last month from cellar dwellers to a competitive team.

Embiid’s only weakness was his 0-for-5 3-point shooting.

Nicolas Batum scored 19 points and Kemba Walker had 17 for the Hornets.

Embiid has brightened the Sixers’ outlook the same way he lights up social media.

Embiid walked out to the wrestler’s theme music, “The Game,” by Motorhead, cocked his head back and spewed water into the air like Triple H would before a main event WrestleMania bout.

Hornets: Batum made 7 of 14 shots after missing two games with a hyperextended right knee. … Zeller, who sat out the last game against Houston with an illness, couldn’t have felt good after getting blocked twice by Embiid. He had 16 points and 10 rebounds.

The Hornets play Monday at Boston.

The Sixers play Saturday at Washington. Embiid is scheduled to sit out because he does not play the second game of back-to-backs as he eases his way back from a two-year layoff.