Gabriel and Gadson each score 17 points in Cougars’ victory 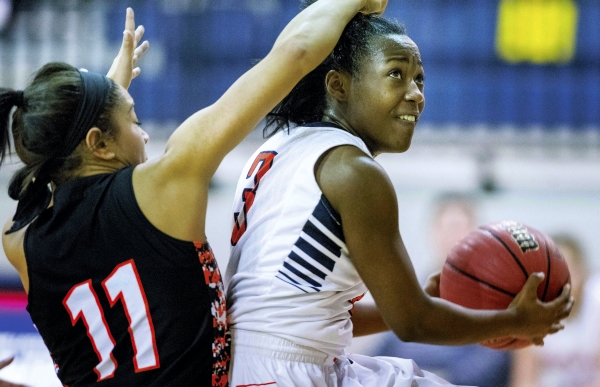 GRANITE QUARRY — They’re throwing around a buzzword these days at Carson, where the girls basketball team continues to alter the landscape in the SPC standings.

“At the beginning of each year, we do that one-word challenge,” coach Brooke Misenheimer explained Friday night, moments after the Cougars leveled host East Rowan, 62-26. “We pick a word to define our team. And the word they’ve chosen is ‘passion.’ Tonight we played with a lot of energy and a lot of passion.”

They did. The victory — its second straight since falling to Salisbury in the Christmas tournament finale — kept Carson (13-3, 8-2) on the radar in the congested league standings.

“I liked how we hustled, how we did all the little things that kept us in it,” sophomore McKenzie Gadson said after finishing with 17 points. “Before every game, every practice, we remind ourselves to play with passion. We’re playing for the name on the front of the jersey.”

Carson has won four of its last five games, the last two by sizable margins. This one got so far out of hand that a running clock was started late in the third quarter and continued throughout the briskly played fourth.

“When Carson turns that pressure up and goes, they are tough to handle,” East coach Kevin Holland said after the Mustangs (4-12, 1-9) lost their third straight. “I thought if we could make them use more half-court sets, we could keep the score down. But live-ball turnovers killed us.”

It was good game for a quarter. East used a last-minute, three-point play and stickback by senior Courtney Wagner to close within 12-11 after eight minutes. The second and third quarters were a different story. Carson turned up the volume, built a 40-13 halftime lead and extended it to 59-16 after the third period.

“We really seemed to hustle the whole game,” junior Olivia Gabriel said after scoring 17 points and upping her career total to 999. “We were aggressive in our man defense, playing as a team. When we got our momentum going, you could tell it got them down.”

“We average about 26 turnovers a game,” Holland said afterward. “And we struggle to score. Even tonight, when we were still in it, we gave it away as quickly as we got it.”

Misenheimer wasn’t complaining. “We were active,” she  said. “We had energy. We had passion.”