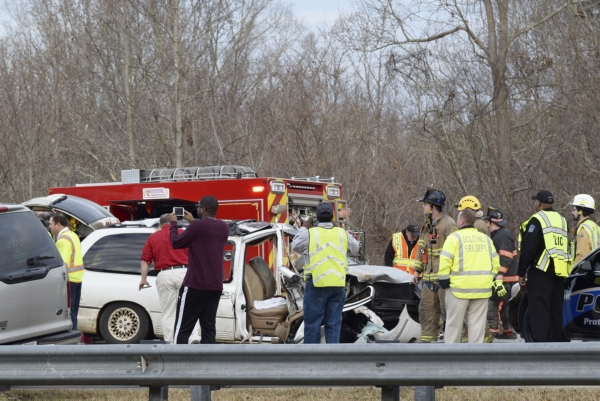 Two were pinned-in in a two car wreck on I-85 Friday morning. Helicopters responded to the scene t airlift patients away from the accident. Rebecca Rider/Salisbury Post

A two-vehicle accident shut down the southbound lane of Interstate 85 early this morning and left two seriously injured. According to Rowan County Telecommunications, emergency services were called out to the location, just near mile marker 78, at approximately 8:15 a.m. for a two-vehicle accident.

According to Highway Patrol, a white minivan was traveling south on I-85 when it rear-ended a tractor-trailer that was merging onto the southbound lane from the right shoulder. Salisbury Fire Department reported via social media that two occupants were pinned in. As crews worked to free the van’s two occupants, medical helicopters responded to the accident, touching down on the southbound lane and removing patients from the scene. Telecommunications reports that two helicopters were called in.

The minivan was driven by Robert Reid, 68, of Salisbury. Vickie Reid, 62, also of Salisbury, was the vehicle’s passenger. The two were taken to Wake Forest Baptist Hospital with serious to life-threatening injuries.

Charges against Robert Reid in relation to the accident are pending, Highway Patrol reports. Mother on 2013 attack: ‘This is someone trying to kill me’

By Mark Wineka mark.wineka@salisburypost.com SALISBURY — Sandra Steen said she was outside in “Nana’s Place,” where she sewed and did paperwork... read more